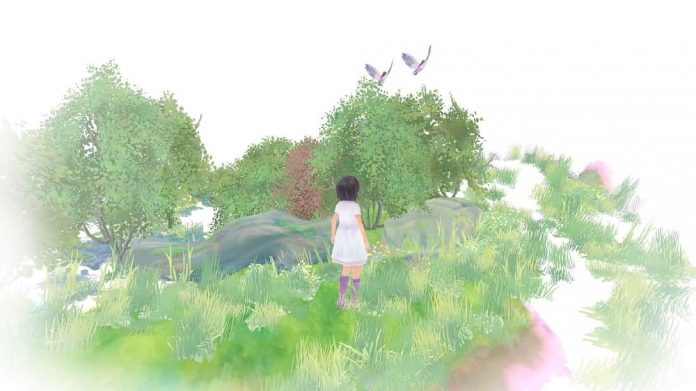 Bored and depressed. That’s how I felt after the three hours it took me to complete this admittedly pretty and unique adventure. The fact that I was depressed is probably a good thing, as it shows that the game at least made an emotional impact, but the boredom? Well, there’s no excuse for that.

Developed by Tiger & Squid, a one girl game studio founded by Sherida Halatoe, Beyond Eyes has you taking control of Rae – a young, blind girl that is at a loss after the disappearance of her pet cat Nani. Despite her impairment, she gathers up the courage to leave the safe confines of her yard in order to hopefully be reunited with her beloved feline, embarking on a short journey of discovery and peril.

Being blind, Rae’s perception of the world around her is very limited, and this is represented in the game by everything being a bright, pure white except what she can hear, feel and sense. With its wonderful watercolour aesthetics, this makes Beyond Eyes a beautiful and striking looking game, drip feeding you with flourishes of colour that appear as you walk and as birds chirp in the distance. Whilst this use of colour goes a great way to represents Rae’s blindness, it’s the game’s understandably slow pace that presents a huge barrier to you actually enjoying it. When you begin your adventure the pace doesn’t seem like an issue – the game’s quirkiness distracts you from Rae’s sloth-like speed, but as you progress further and the environments open up it mostly feels like a chore to get from A to B. The issue is compounded when you find yourself at a loss with what you have to do or where to go next; the combination of not being able to see much of the environment you’re in and the snail’s pace more often than not frustrates. It also doesn’t help that the game is simple to a fault – you don’t do much more than just walk through environments. Sometimes you’ll encounter an obstacle such as dog or vehicle, but the answer is to simply find a way around it, usually resulting in some tiresome backtracking.

As you lumber through fields and towns you begin to realise that despite the presence of an interact button, Beyond Eyes presents a world in which you have very little to interact with. I could quite possibly count the number of times I was able to use an object in the environment on one hand, and it was never to do anything particularly fun or arduous. You also quickly find that as well as a lack of interactivity, there’s also a distinct lack of peril on your adventure. Sure, you encounter things that could harm little Rae, but the game makes sure that nothing ever does, with Rae forcibly backing herself away from anything that she perceives as dangerous. Crossing a busy road for example becomes a simple task of finding a crossing and pushing a button to stop the traffic lights, as you cannot attempt to cross any other way. Granted, I don’t particularly want to see a little girl get hurt – it wouldn’t suit the tone of the game – but it also trivialises Rae’s adventure and makes it just too safe. When I first delved in to Beyond Eyes I really thought it was going to be something special, and to some degree it still is. The bare-bones storytelling successfully manages to create an adventure that is both heart-warming yet crushingly depressing at the same time, which is to be applauded. Unfortunately the gameplay itself is just dire. If you have the patience of a saint and want to play something entirely unique than you may get something more out of Beyond Eyes than others, but for most its dawdling and repetitive nature will feel too much like hard work for what is on offer.

Beyond Eyes is available on PlayStation 4, Xbox One and PC. We reviewed the Xbox One version.