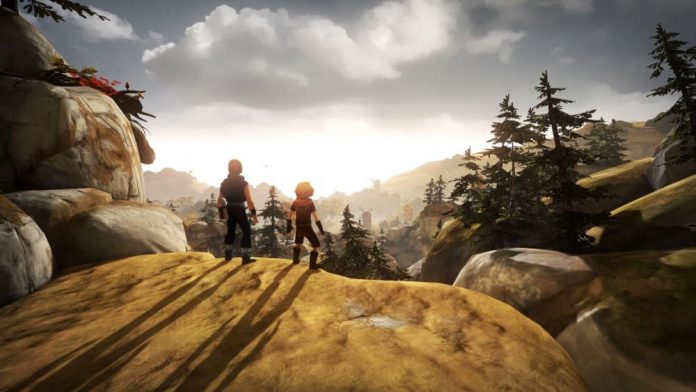 Originally released in 2013 on Xbox 360 and shortly thereafter on PlayStation 3, Starbreeze Studios’ Brothers: A Tale of Two Sons has now made its way to current generation consoles.

This new release comes bundled with some new extras, including an art and sound gallery and optional director’s commentary, but other than that not much has been changed. Not that it’s a bad thing, mind.

Surprisingly enough, Brothers tells the story of two brothers. They have no names; we simply know them as Little Brother and Big Brother. Through a touching opening sequence, we gather that their father is gravely ill, and desperately needs some medical attention. His sons are his only hope, so together they set off on an epic quest across a vast and magical landscape to gather the cure that will hopefully save their father’s life.

What’s strange for a game that seemingly relies so heavily on story and characterisation, is that there is no dialogue whatsoever. Well, none that is comprehendible, that is. All characters in Brothers speak a made-up language: think Sigur Rós crossed with The Sims. Whilst I can appreciate the developers’ choice to do this – set in a mythical land, it’s unrealistic to think these boys would be walking around spouting out an American accent – personally, it puts a wall between the player and the characters, making them harder to relate to. And quite frankly, it sounds annoying and grates on your nerves rather quickly. Aside from the pseudo-Hopelandic language barrier though, the soundtrack of this game is utterly gorgeous. The musical score, though subtle, complements the environment and atmosphere perfectly. It’s only outshined by the absolutely breathtaking scenery that pervades Brothers from start to finish. Never have I been so compelled to stop what I was doing in a game to grab a screenshot and just admire the view, but Brothers had me doing that multiple times. The imagery of each different location is relentlessly awe-inspiring; each environment has a very different feel to it but each is equally as stunning as the last.

It’s a shame then, that the actual gameplay is somewhat lacking. Brothers‘ “unique selling point”, if you will, is that you control both brothers simultaneously. Yes, that is as much of a pain in the backside as it sounds. Your left stick and left trigger button controls control Big Brother, whilst the right stick and right trigger controls Little Brother. Controlling each brother individually is very tedious, but controlling both at once – which is necessary for many parts of the game – requires some serious dexterity that frankly I’m surprised I managed to find. It’s like when you were a kid and you’d attempt to rub your belly and pat your head at the same time. It is a nightmare at times, and you’ll undoubtedly make many mistakes as a result, but it does get slightly easier as the game progresses. The gameplay itself feels somewhat like an adventure game, with the odd puzzle thrown in for good measure. The puzzles are done well; they may take a moment or two to figure out, but none of them are particularly obscure. Much of the game though, is a case of travelling across the various landscapes. You’ll run, jump, climb, push, pull and rinse and repeat; it feels at times like each mechanism has just been potato-printed onto a different environment. The first time you vault up a broken ladder as Little Brother and release a rope for Big Brother to climb up feels like an achievement, but when you’ve done the same thing for the fifth time it gets a bit boring. The same goes for climbing up a wall or pushing a lever to move a mechanism. There isn’t enough variety of actions, and as the game is quite short, these frequent repetitions stand out and dampen the experience.

Brothers: A Tale of Two Sons is certainly worthy of a place in your library – though maybe wait until it’s on special offer. Its short playtime (around four or five hours) provides plenty of awe-inspired entertainment, but once you’ve completed it, there’s little to go back for. The game’s gorgeous and dream-like art style is a major proponent in propelling you forward in what would otherwise be a repetitive and frustrating journey – but it’s a journey that’s worth it for the scenery.