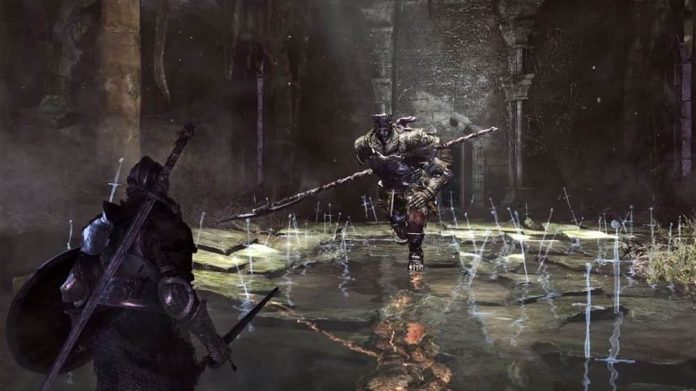 Dark Souls holds a special place in my heart. The universe and lore, coupled with that infamously punishing gameplay, offer an experience like no other. Unfortunately it’s older brother Dark Souls II didn’t quite live up to expectations. So as expected, the announcement of Dark Souls III filled me with much excitement, but made me rather nervous: will FromSoftware deliver a game that’s back on form, or will it fall victim to the same pitfalls as Dark Souls II?

Seeing the gameplay trailer at gamescom 2015 left me reeling. Microsoft’s conference was streaming away to itself in the other room whilst my friend and I had stepped into the kitchen for a well-deserved coffee break. I’d just raised my mug to my mouth as the unmistakeable orchestral music weaved its way into the room. The brooding vocals created an epic and unsettling crescendo, and I caught my friend’s eye. We held each other’s glance for a few moments with an intense stare. We both knew. We dashed into the lounge and stood in respectful silence as the trailer played out. The silence continued long after the trailer had finished as we both registered what we had just witnessed. I raised the mug to my mouth and finally sipped what remained of my coffee, preparing to be hit with its lusciously warm embrace. It was stone cold; perhaps the darkness had devoured my coffee too.

The first thing to note was the overall tone of Dark Souls III. Having played Bloodborne with its fluid, faster pace of combat along with a more gothic art direction, it was immediately obvious that its style has seeped into the core of the latest instalment in the Souls series. The trailer oozed a certain darkness that managed to creep into the entire world; fond memories of the original Dark Souls – especially Blighttown and the Catacombs – came flooding back. Dark Souls III seems to be taking the survival horror inspiration from Bloodborne and allowing it to permeate each and every corner of the map. Convenience is not always key

For me, having a truly interconnected world is one of the most important elements that should be present in Dark Souls III; no more warping between bonfires from the very beginning of the game. Sure, warping allows for a more convenient, less time consuming method of gameplay; it’s handy to be able traverse the areas you need to get to with relative ease. However, it’s a convenience that stops you from actually becoming embroiled in the world itself. Dark Souls I forced you to learn the map and its intricacies, making you relish every moment you uncovered a hidden area, pulled a lever that revealed a shortcut, or just kicked a ladder so you didn’t have to repeat that devastatingly long run you’d only just managed to survive. Those head-scratching moments, those arduous sessions of effective journey planning, those fist pump celebrations and those realisations of “…the bonfire was only there the whole time…”; they all but disappeared in the second game.

Feel the highs and the lows

The sense of “verticality” in Dark Souls I was an element I relished; you actually felt the weight of the world above you as you moved further and further below the surface, and you could fully immerse yourself in the solemn beauty of viewing the world from the dizzying heights of the Duke’s Archives. Dark Souls II had some great areas to explore with fantastic scenery, but felt hampered by a sense of misdirected fan-service. It was almost as if FromSoftware wanted to create all manner of areas to please everyone’s tastes, so slapped them down here, there and everywhere with no concern as to how they correlated with eachother. In Dark Souls I, there was nothing quite like witnessing the magnificence of The Great Hollow lighting up the darkness of the Catacombs as you skirted the rocky path to Nito. Sure, it’s always fun to explore different landscapes, but to me, it’s the way they all tie together that adds an even greater sense of exploration and discovery. There’s something deeply unsatisfying about merely slaying all the enemies in a given area only to warp directly to another area and repeating the process. Characters are vital to the experience in a Souls game. I want to see characters on par with Solaire of Astora and Siegmeyer of Catarina. I want to be intrigued by their dialogue, emotionally tied to their existence and thankful that we had a chat in the midst of our dire situation. I want to follow them throughout their journey, observe them as they grow stronger or weaker, have them fight alongside me against a terrifying boss, discover their true identities and make them a truly integral part of my journey. It would be a truly immersive experience to see characters following different branching storylines dependent on the actions you take throughout your game. A tantalising thought is the possibility of following a rivalry between two sworn enemies or inseparable friends, with the opportunity to help or hinder.

Some may remember Snuggly the Crow from Dark Souls I, and her oddly fascinating and mysterious nature. The ability to drop items into her nest to have her exchange them for you was, in my opinion, a stroke of genius. I’d love interactions with characters in a similar manner to Snuggly; NPCs shouldn’t just be limited to simply being vendors, but also people to interact and engage with.

I want to return to an area and find that it has changed subtly or entirely. Perhaps new characters have emerged or the landscape has changed as a result of our actions. I want to be left puzzled as I try to mull over why this could have happened and how it’s going to affect the rest of my journey. The original Dark Souls dropped a surprise every now and again, though on a much smaller scale. I’d return to Firelink shrine and find a serpentine friend to talk to, or discover my resting spot charred and burnt out. New Londo was an area which could be altered and revealed in all its deathly glory. Knowing that your environments could change around you would add a new level of intrigue and would make players think even more about their actions. Critically, it would create an even tighter bond to the harsh and dark landscapes you’re cautiously traversing, helping immerse you even more in the Souls universe.

There’s no doubt that Dark Souls III will be filled with outrageous secrets and optional content; they’ve been synonymous with the Souls series since its first iteration. Bring on those hidden doorways, winding paths leading to great treasure and numerous mimics waiting to troll you oh-so-hard. Pharros’ lock stones were great additions to the franchise, and so it would be a welcome addition if FromSoftware offered even more clever and inventive ways to hide weapons, covenants, NPCs and optional areas or bosses. Call me a Dark Souls I fan-boy if you will, but I would squeal with delight at a return to that menu system. Those who played Oblivion followed by Skyrim may understand my sentiments; the old-school scrolling just feels right. Forget a “smooth” and more “intuitive” approach and bring us back to the earthy roots of an aged, yet comforting RPG menu.

Dark Souls has always rewarded a defensive approach. Raise your shield, or roll past enemy attacks and wait for an opportune moment to strike. Whilst I didn’t mind holding up my shield and blocking, followed by swinging my enormous two-handed greatsword at opponents, to me, it always felt a little cheap. I could adopt the same strategy over and over again, and after a while that just isn’t very satisfying. By maxing out on strength and endurance, I could stand there tanking all forms of punishment before downing a fearsome-looking boss in practically two hits, yet in Bloodborne I couldn’t even dream of such a play style. Firstly the combat was much faster and secondly, shields were all but eliminated from the game. Looking at the gameplay trailer for Dark Souls III, it seems that the combat has been infused with Bloodborne-esque speed. This is a welcome addition, as it forces you to think on your feet, creating sweat-inducing fights and a more intense atmosphere; almost as if every enemy poses a threat this time around. Of course, I don’t want them to completely eliminate the “tank” who delivers earth-shattering blows and takes an enormous amount of punishment, but rather that gameplay style be altered in a way that makes it less of an option to cruise through the game without so much as a scratch. It would be a fitting end to finish this feature on bosses. Judging from the gameplay we needn’t be too worried: Dark Souls III looks to return to sense of epic scale that the original game offered. Every time I walked through a fog door in Dark Souls II I knew full well that the boss would be somewhat scary looking, but lacking in “authority”. Judging by what we’ve seen so far, Dark Souls II looks to have brought back the towering giants that loom over you and dominate the arena with crushing blows and devastating spells. The bosses look agile, have an aura of superiority, guile and an all-important ground-shaking quality to them that was disappointingly lacking from Dark Souls II.

It certainly looks like FromSoftware have borrowed cues from Bloodborne in creating bosses who incite fear in different ways. Maybe we have to fight whilst being chased, or we are the ones doing the chasing. Perhaps we could be fighting through an ever-changing environment, or another monstrosity could crash through the wall just before we make the final blow. There are endless possibilities, and for that, I’m really excited.

I trust FromSoftware to deliver an immense, jaw-dropping, awe-inspiring and profoundly terrifying experience. Hayao Miyazaki is taking up the helm again and this can only mean the franchise being led in the right direction. Watching the gameplay trailer, I’m confident that a number of my wishes, along with other fan’s wishes will be answered; it may not be an enormous departure, and treads familiar territory, but it certainly looks like all the great elements from Bloodborne and previous Souls games are being fused to craft the perfect Souls experience.

An ode to Solaire would be grossly incandescent.

Watch the gamescom 2015 gameplay trailer below: