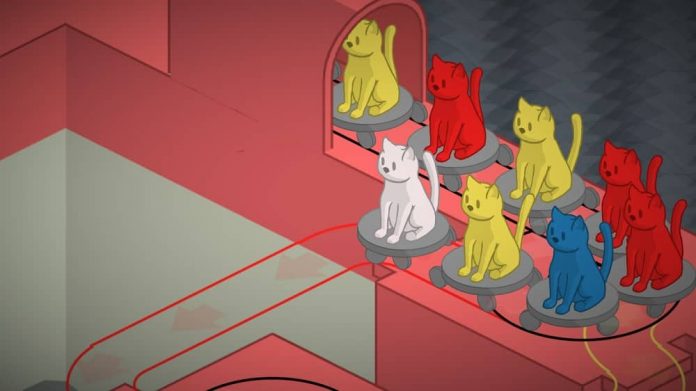 But as much as I like cats, I don’t think I’d have ever imagined a cat on a little train track, suddenly whizzing off and away into the air, before disappearing under a puff of smoke and a meow, all to save the planet using ice cream-based train tracks.

I must be a real dullard to not have seen that coming because The Cat Machine, recently released on Steam, is all about ice cream train tracks and funny multi-coloured cats hell-bent on saving the world from overheating. Yes. This really is the plot of The Cat Machine. The question is:  does it manage to set itself apart in a world overloaded with quirky indie titles, or does it stand alone like a crazy cat lady in an old people’s home?

The Cat Machine is a series of logic puzzles where the player must use a hearty amount of forward planning and logical thinking to successfully guide colour-coded cats along colour-coded tracks.  You’re given a series of “cat trains” made up of varying colours of cats and it’s your job to match these to the appropriately coloured tracks, with the ultimate goal being to safely return a neutral, white coloured cat to the end of the level.  It’s a case of balancing colour co‑ordination and logical forward thinking. By the way, did I mention this game has cats?

Your level progress is tracked in a “pyramid” fashion, where easier levels are situated at the bottom left of the pyramid, and with each level completed, the surrounding levels are unlocked, allowing you to progress in any direction. This approach allows the game to open up a little, and you can always choose to play an easier puzzle first if you’re stuck on one of the harder puzzles and vice versa, making your route through the game a little more three-dimensional and less linear than most traditional puzzle games. 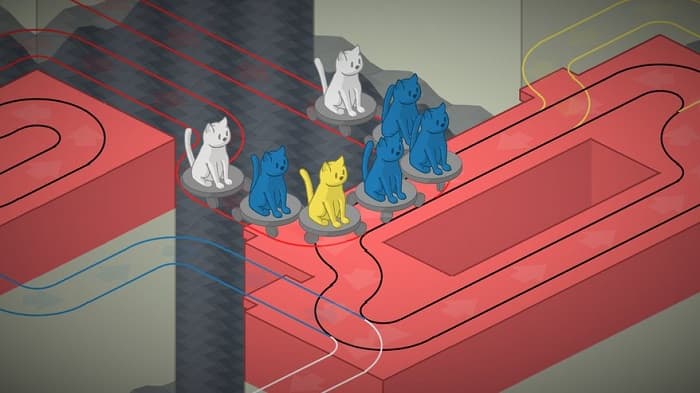 This is all presented with a cute, clean graphical style that pleases the eye with warm, pastoral colours. There’s a strong emphasis on bright oranges and blues, clean lines of presentation and simple, academic design. Information and graphics are laid out sparsely and, honestly, it all looks very nice. It is very simplistic; there’s no fuzz or detail splattered across the screen and the game never overloads you with information or unnecessary busyness. Visually, it reminded me of the likes of Portal 2 but without nearly the same level of wit and cleverness – but, hey, at least it isn’t yet another Indie game with a 16-bit retro colour palette, right?

My biggest gripe with The Cat Machine is its tone: it tries really hard to be funny, but a lot of the humour hits a real dead note. The emphasis on logic and planning seems at odds with the general off-beat quirky tone; breakages of the fourth wall when it isn’t necessary, poor puns, and overall terrible and unashamed exposition meant it was enough to induce dismissive eye-rolling and left-clicking to progress without reading. The game seems to believe it is a lot funnier than it is and as a result, it suffers a kind of blandness that shouldn’t really happen with a game about the internet’s favourite animal. 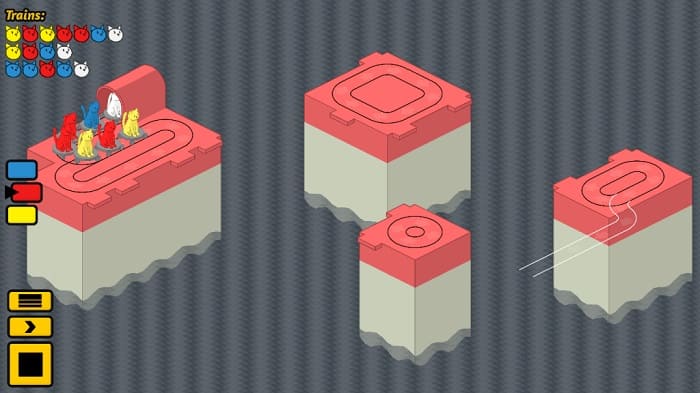 Solving puzzles, too, offers little in the way of satisfaction. The music is a droll, repetitive irritant, and slowly removing cats from the train and slowly building towards finishing a puzzle doesn’t offer any kind of punchy reward or positive audio-visual feedback. As you successfully pluck a colour-coded cat from the appropriate track, the cat will ping away, and whizz off into the ether, with badly acted and recorded “meow” noise, obviously imitated by a human – and it feels so underwhelming that you’ll soon wonder why you’re even bothering. Clearing the cats from the tracks lacks any punchy, satisfying reward, and it wouldn’t have hurt to put more emphasis and satisfaction into clearing the puzzles, especially as you hit the tougher puzzles. Think about Tetris: when you clear a line, it explodes and fizzles away, the top lines slide down a row and your score counter gets a nice little boost. Game designers were getting this right years and years ago.

The game itself is a little light on features, and beyond finishing the puzzles offered in the single-player mode, I doubt you’ll be returning for repeat playthroughs or any kind of deeper insight. It’s content with you merely finishing the train tracks and moving on. Nothing to see here.

Overall, The Cat Machine is a clear, honest attempt at basic logic systems and its conundrums emphasise forward thinking, planning, and intelligence to finish the harder puzzles. But in a world where the Portal 2’s and The Talos Principle’s dominate the puzzle genre,  TheCat Machine feels aged and bland, and it sadly gets left in the dust trails of giants. However, what you do get is a bright, cute and colourful introduction to logic puzzles, and despite certain tonal blindness it makes a stab at being a little different in a sea of titles overburdened with samey design.

The Cat Machine is available on PC.