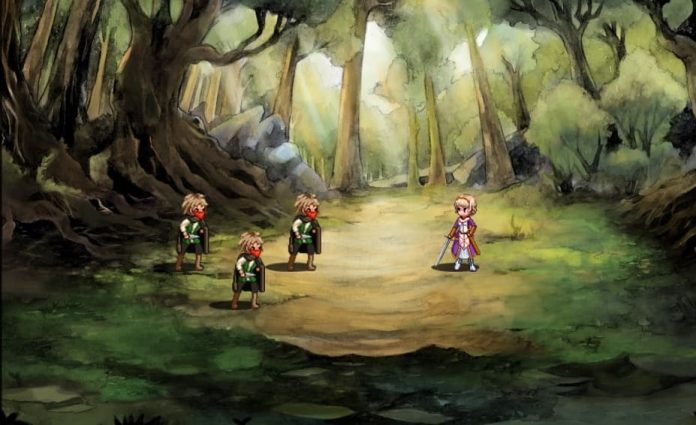 Forgoing the clichéd “boy saves world” storyline in favour of something more grounded in reality, Celestian Tales: Old North is a JRPG that attempts to stand out from the crowd.

Luckily for its developer, Ekuator Games, the gambit pays off, and matched with high production values and old school feel this is quite possibly the best traditional RPG I’ve played in recent years.

What first strikes you as you begin to play Celestian Tales is just how beautiful it looks. Environments have that classic 2D RPG look but are superbly created and are resplendent with detail; creating a sense of nostalgia yet impressing with their crisp clarity. Characters are similarly impressive, with each member of your party having their own unique and charming appearance. Even more beautiful than the visuals however is the sumptuous soundtrack that accompanies the game; each track marries the location or situation you are in perfectly. In fact, I found the whole audio-visual experience similar to that of a Suikoden game, which is high praise to say the least.

The story of Celestian Tales: Old North follows six squires as they train to become knights under Lord Alain of Levantine, with you choosing any one of the six as your main character at the beginning of the game. Surprisingly the choice isn’t just cosmetic, as each character has their own little introductory chapter as well as unique skills, moral choices, story scenes and ultimately, ending. The story is a short but engaging affair, dealing with a war against invaders from a land beyond the Old North, and focus is placed on the morals and motivations of the characters and the things that they do. Whilst I personally would have liked to have engaged in some side-stories to flesh out the adventure, they are unfortunately absent, meaning that it’s a linear journey with nothing much to offer outside of the main story. Whilst Celestian Tales: Old North tries to break away from the JRPG mould in regards to story, in gameplay terms it sticks to the tried and tested systems of old, and to be honest I’m thankful for it. You have towns, shops, a world map, turn based battles, and even skills and equipment, making this feel just like an RPG from the early 90s. Unfortunately though, the game’s battle system lets the experience down a little.

You can select any three of the six squires as your active party, enabling them to duke it out with up to six foes when you engage in combat, meaning that you are quite often outnumbered. At the beginning of the game this is not an issue at all – the battles are so easy you’ll be able to just keep selecting the attack command to win without even worrying about the plethora of active and passive skills at your disposal. As you reach chapter four or five however, there’s quite a large difficulty spike which can often cause frustration. Enemies suddenly go from taking a couple of hits to kill to maybe five or six for all but the most well equipped of parties, and have access to skills that are utterly devastating. At this point you have to really knuckle down and reassess your party members as well as your skills and equipment, but even then the battles will still be challenging. In the end, I found myself having to grind to raise my character levels which whilst is par for the course in this type of game, it’s not ideal. Overall, despite the somewhat frustrating combat in the latter stages of the game, I found Celestian Tales: Old North to be an accomplished RPG with a lot of charm. Proposed as the first game in a trilogy, there’s a lot of promise shown here for the sequels, which I hope will expand the vision of the series to allow for more content outside of the main story. Regardless, as it is Celestian Tales: Old North still offers exceptional value for money, with six squires to play through the story with in order to get the complete picture. This is a game that any fan of the RPG genre probably won’t want to be without.