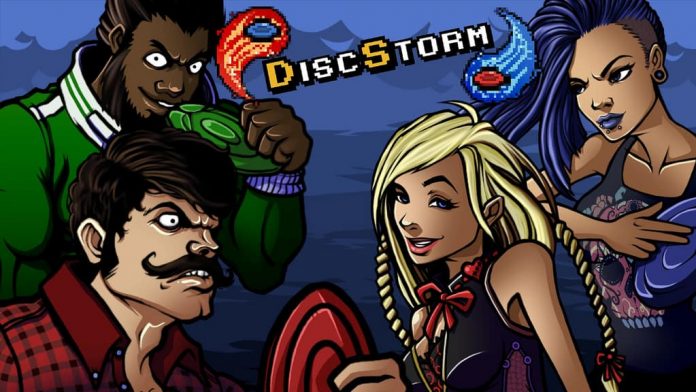 You know you’re off to a good start when you wake up in the middle of a dojo to a woman as old as time sipping steaming hot coffee and asking you to throw discs at crash test dummies to a soundtrack of old school arcade music. Just another average day at the office, right?

You thought wrong. DiscStorm is a journey unlike any other where you’ll play ring-around-the-rosy with flesh-eating rats, go toe-to-toe with a mummy that just doesn’t want to die, and ultimately die a dozen times because your own disc came reflecting right back at you even after killing a whole wave of zombies. The idea is simple: throw discs, kill things, survive. It’s one of the easiest concepts you’ll ever play this side of the millennium yet it’ll be harder than any of the games you’ve been wearing your thumbs out on recently.

DiscStorm follows a very simple, very monotonous, and very linear journey from the dojo to a pirate ship in the depths of the deep blue sea, to the very dark corners of space, where the progression through each level is as easy to follow as the instructions on the back of a microwavable meal.

DiscStorm’s single player campaign is made up of just 10 action-packed levels which will see you take on wave after wave after wave of lightning-fast ghouls, brains-that-look-like-flowers zombies, some really annoying numbskulls who resemble the trolls from Harry Potter, and the level’s chosen additional enemy – which could be anything from those before-mentioned flesh-eating rats (that’ll really get on your nerves after a play-through or two) to kill-us-twice skeletons who really were lurking in your closets. In between each wave, you’ll face a boss who’ll get harder each time you face them. The first two bosses are always the same, with the second battle always being an inordinately faster-paced fight than the previous one. Each level will end by battling a big boss, which half the time is an easier and more enjoyable task than battling the waves that came before it. Each level allows you to pick a character from the measly few available and follows the exact same story each time no matter who you pick, when you pick them, or even what costume you’ve put them in. The story is sweet, and the levels are beautiful, yet there is a considerably horrible lack of depth to this tale; a layer or two missing from what could be something so much more special than the sum of its parts.

What should be a wonderful game to play is an excruciatingly painful experience for anyone who isn’t an experienced button-masher. Why you ask? Because you’ll be dying more times than you’ve had hot dinners and if you like your PC, maybe this isn’t the first game you should be picking up after a long day slaving away. Matters are made worse by the simple fact that this is an extremely fun game to play and one which is sugar-coated in a beautifully lovely concept – living life to its fullest one adventure at a time. It’s heart-warming right? Yeah, heart-warming when the lava level comes and gobbles you up.

It’s more of a testament to how terrible I am at old-school style video-games, but until you master the game’s very shifty controls you’ll be running around shooting your three little discs aimlessly until one of the many monsters puts you out of your misery. The first real level took me 32 deaths and 59 minutes of actual playing time to defeat because half of it was spent trying to figure out how to kill each enemy. It’s not as if it’s a particularly difficult system to learn either; it’s the simple fact that the tutorial’s instructions are under the impression you’re using an actual controller – which is somewhat fine because the game recommends you do to get the most out of it – but if you’re one of those few who hasn’t got access to one, you’ll be scratching your head like the giant ape you fight straight after the tutorial. DiscStorm is definitely a game to play when you’ve got a fair bit of time because if you can’t beat it like Michael Jackson, then you’ll be falling into its big open booby trap: repetitiveness. The order of the waves is exactly the same each time: no matter which character you pick or how many times you’ve died, they’ll still be coming out in the same amount at the same time doing exactly the same thing.

To make that tedious drone of patterns that little bit more distressing, DiscStorm features a soundtrack that was purpose built to irritate you as much as an 11 year old going wild on Call of Duty does. Whilst each level has its own chip-tune classic, you’ll be banging your head off the wall after hearing the all-too-cheesy pirate theme one too many times when the Mermaids get a little too sassy for your liking.

That’s where the game’s character lies though – sassiness! Whilst the dialogue is exactly the same for every character you play as, you’ll still find yourself being tickled pink by the silliness of it all, even if it makes no sense whatsoever. When a mermaid delivers a cringe-worthy joke to a boat full of drunk pirates, you know the developers get you – its moments like these that redeem this game from the depths it occasionally drags itself down to. With all of this aside, thank god for multiplayer as it seems that this will be the mode the world floods to once they’ve dismissed the game’s single player mode and unlocked all of the rewards – which there are only 14 of – and ticked off all the achievements – which there are 29 of. Multiplayer is exactly the same as single player, you’ve got three discs and one goal: survive. Death-matches are as fun as they can be on a game like this, and it’s where you’ll spend the majority of your time playing this game, if you play it for very long that is.

I don’t want to be that bearer of bad news, because DiscStorm isn’t a terrible game at all. It may be tedious, and it may have you climbing up the walls like Spiderman at times, but it’s genuinely a fantastic little game to get lost in for a few hours. It’s just a shame it’s inordinately annoying.

DiscStorm is available on PC and is coming soon to PlayStation Vita. We reviewed the PC version.