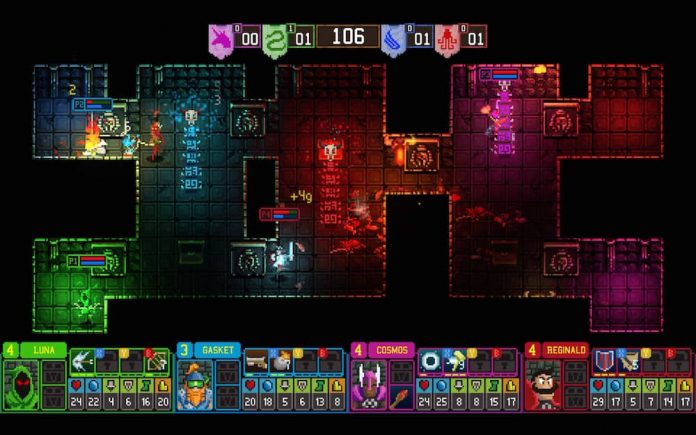 At the video game United Nations summit, a new ambassador has walked onto the platform.

His name is Dungeon League, and he’s here to bring together the “dungeon crawlers” and the “party gamers”. No-one asked him to, but apparently he’s got a BTEC in International Relations and it’s too late to ask him to stop. Suffice to say, Dungeon League is here to stay.

There was once a time long ago when groups of people got together in the same room and spent the night roleplaying. No, not like that. I’m talking about the infinitely less sexy Dungeons and Dragons, or “tabletop RPG” as the genre is now more widely referred to as. The influence of Dungeons and Dragons has been seen to at least some extent in almost every fantasy RPG and adventure video game since. Sadly, although the RPG evolved immensely since those early days, the sheer thrill of playing a fantasy game in the same room as your friends was all but lost as single-player RPGs and MMOs saturated the market. Dungeon League aims to change this. Developed by Achebit (a.k.a. the one man developing machine Christopher Yabsley), Dungeon League is a fast-paced dungeon crawler designed to be enjoyed primarily as a local multi-player party experience.

The action unfolds on a single screen as a small, procedurally generated 2D dungeon shrouded in a pitch black fog of war appears in front of you. Your character, dubbed an “All Star”, waits patiently in his starting room. There’s a count down, and you’re off. So are your three friends. Chaos ensues. Perhaps you’re fighting in a free-for-all Deathmatch, or perhaps it’s a team based Capture the Flag competition. Either way the round is only going to last two minutes, and every second will be mayhem.

In Dungeon League you have a roster of six characters to choose from, which will increase to 12 with the release of the full game in 2016. These All Stars are your archetypal RPG heroes – a fighter, a wizard… a unicorn? Don’t expect Dungeon League to take itself too seriously. Each character has a set of four powers, with all characters having access to some form of dash, stun, and AoE attack in order to keep things balanced. After each bout in the dungeon you will earn gold and experience by killing beasties, besting other All Stars, and looting treasure whilst simultaneously trying to achieve the objective or “Quest”. Gold lets you buy magical items that you can put into your two equipment slots to boost your stats and grant you abilities, and experience allows you to upgrade your powers, encouraging you to create and experiment with the ultimate “build”. A staple of the RPG genre, the levelling and gear system is streamlined and simplified, accelerating the process massively – after all, each match lasts a maximum of 10 minutes and then it’s time to start afresh. 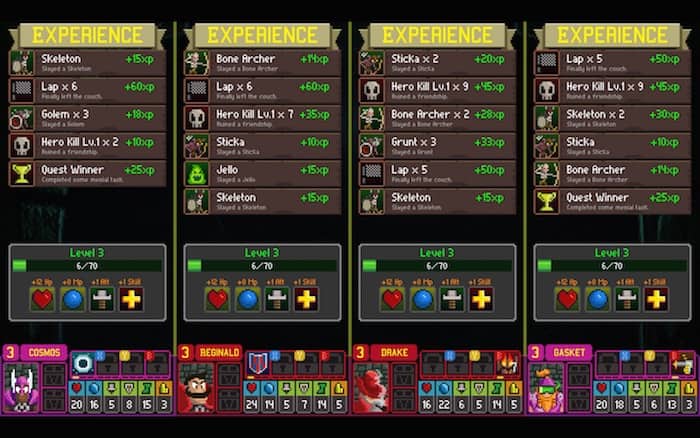 Much like the levelling system, the game is currently very stripped down. The Early Access version at the moment includes Tournament (two to four players), Tutorial (one player), and Free Play (one to four players) mode, with Dungeon Ball and the cooperative Gauntlet and Survival Modes coming soon. Tournament Mode is the core game (at least for the moment), with a handful of classic multi-player modes randomly cycling in every 10 minute Tournament. Free Play is mostly for trying out different characters, as there is nothing else to do other than to rack up kills as you infinitely respawn. Tournament runs its course after an hour or two of playing with the minimum of two players, however as with all party games it presents almost infinite fun when played with the full four player line up, or at least as much fun as to last you until the new modes are released.

As mentioned earlier, Dungeon League is not a serious game, but it is very well crafted. The pixel art is tight and combines the nostalgia of colourful yet simple sprites with unexpectedly smooth and realistic lighting effects, enhancing that genre spanning aesthetic. The score is the perfect mix of classic dungeon chip-tune and grungy battle arena drumming, which really gets you in the mood to degrade and destroy those that you once called friends. Most impressive though is the voice acting, which came as a surprise considering the old school style of the game. Featuring a full cast of voice actors for all of the characters, the little catchphrases shouted out in battle and in between rounds are often hilarious and make each All Star more than just a trope. There are some problems with Dungeon League, which is to be expected with an Early Access game. Some of the characters feel a little unbalanced, especially when certain All Stars are pitted one on one. The variety of game modes, monsters, and dungeon traps are few in number and can make the game feel repetitive if played for too long in one go. Certainly, in the modes currently available, four players are recommended to make the most out of your Dungeon League experience, and gathering that number of people in a room at the same time can be difficult. Although playing with a keyboard has recently become possible, it is far inferior to the gamepad which is almost a necessity for all players to properly enjoy the game. However, it is clear from the development blogs that Achebit is doing his best to constantly rebalance the game and create new content, relying heavily on community feedback.

Dungeon League has more than enough potential. It is fast becoming a must-have party game, although you may want to wait a while for more features to be released. Also, whilst its dungeon crawling has initially given it a natural home on the PC, unsurprisingly the game will be coming to consoles next year where it will surely thrive in the party game genre. In the meantime, if you’re still wondering if Dungeon League is your sort of game, consider this: the tutorial expressly recommends disconnecting your friends controller in order to shotgun your favourite character. This is Dungeons and Dragons on a plus five Potion of the Berserker, and it’s about to go medieval on your ass.

Dungeon League is in Early Access and is available on PC.