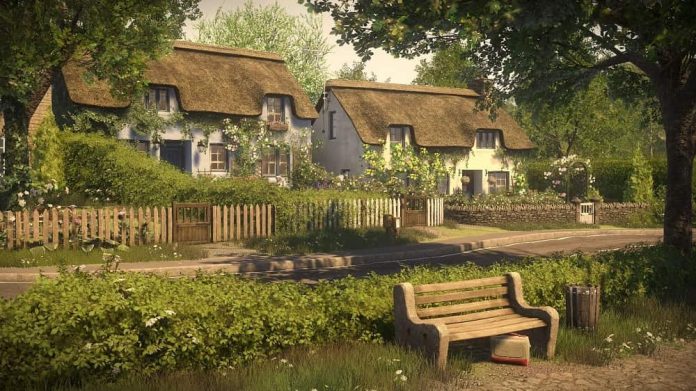 It’s not often that a game can make you feel so ill at ease from the start menu alone.

“Zero, eight, zero, one.”
“The emergency may occur with little or no warning.”
“Six. Zero. Six. Zero.”
“In case of emergency, stay tuned for important broadcasts.”

At just £15.99 on the PlayStation store, Everybody’s Gone To The Rapture takes you on a first-person adventure of confusion, elation, hope and dread through an idyllic British village. And with no set plot or path to follow, it’s surprising that this is one of the most addictive games of the year.

In the newest venture from developer The Chinese Room and Sony Santa Monica, you play as an unnamed force exploring the beautiful Shropshire countryside. At first glance, everything is great. Sunlight is streaming through the trees, birds are singing in the distance and pints are only 50p in the local pub. It’s the perfect day.

But where is everyone? Guided by nothing but glowing, ethereal lights, you interact with radios, TVs and doors to discover the village’s secrets and piece together what happened. The more you uncover, the more you realise that something is horribly amiss.

Primarily, you follow the story arc of six key characters and their actions in the run-up to the end of the world. The secrets and lies of their everyday lives are interwoven with an unexplainable event that’s left the world silent. Minute details of their relationships, ambitions and beliefs add new layers of context to the rapture-esque incident itself. This often leaves you feeling conflicted and worried for them, even though the worst has already happened.

During gameplay there is no directional compass, menu or map. Who – or what – you play as is left as a mystery, as you never see your own reflection, hands or feet. This clean, clutter-free interface allows you to fully immerse yourself in a landscape that’s frozen in time and notice the oddities spattered throughout the village.

As you progress, the impending sense of doom creeps in like a thick fog. Birds are dead on the ground. Toys lay forgotten on the floor. Blood-soaked tissues are piled up everywhere. This mysterious event, rapture or otherwise, has already happened. The danger has already passed, but you’re left feeling horribly uneasy of the unknown. Free of any set goals or paths, you’re driven only by your own morbid curiosity to reveal the truth. What happened to these people? Was it painful? Is this something they would have wanted? Unless you’ve experienced the gameplay first-hand, it’s hard to fathom how ridiculously pretty Rapture is. The Chinese Room have truly outdone themselves. You can’t help but marvel at the sheer level of detail, from the worn away number pads on telephones, to specs of dust flowing through the air.

The slow walking pace can become frustrating, especially if you end up repeatedly searching the same areas in order to uncover new clues. But fear not! There is a hidden sprint button. By pressing R2, players can speed up to a jogging pace when outside, which makes travelling back and forth much less annoying.

However, the deliberately slow pace has its place. This is the sort of game where you are meant to take your time and savour every aspect of gameplay. To get answers, you need the patience to look at each piece of information from all angles and contemplate its impact.

A really cool aspect of gameplay is that it is entirely unique to each player. Depending on whether you follow cues or wander off on your own whim, you can discover new parts of the story in any number of orders. This is an especially interesting challenge if you try to discuss your progress with your friends, as it’s so hard to describe anything without accidentally revealing huge spoilers. Then again, this gives you a great excuse to lock yourself away, put off that big project for one more day and play until your eyes hurt from all the pretty.

Another great feature is the way you can tune lights for more information, much like a radio. Spread throughout the game, these denser balls of light hold vital information and arguably the most poignant moments within the game. To unlock the secrets of these particular orbs, players are prompted to utilise the PlayStation’s gyroscope feature and tilt the controller from side to side, as if they were fine-tuning a radio to get a clear signal. Even if action-packed shooters are normally your deal, step out of your comfort zone and give this game a try. You can get anything from a few hours to a few days’ worth of great gameplay, depending on your preference and investigatory approach.

Everybody’s Gone To The Rapture is an amazing example of what you can do when you have a great concept and give players the room to let their imagination run wild. Offering a rich atmosphere and meaty philosophical concepts that’ll leave your mind reeling, Rapture paints a different kind of doomsday to all preceding incarnations.

Everybody’s Gone To The Rapture is available on PlayStation 4.