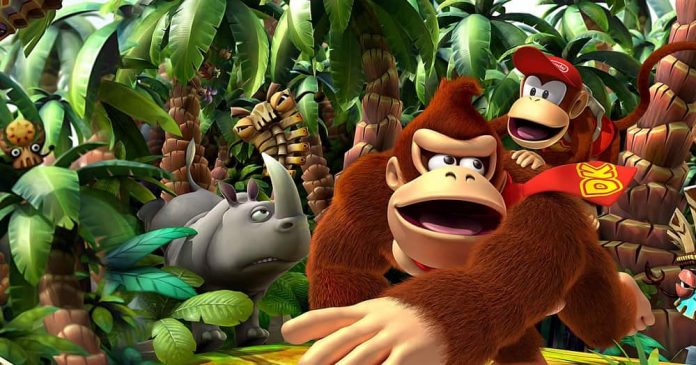 Remember when we were innocent? Think about it. Take a break from plotting the growth of your criminal empire or raising your destructive magicka powers to the point where you can char an orc from a hundred yards and consider this scenario instead: your secret banana stash has been raided and the jungle won’t sleep until you’ve got it back!

Such was the premise of Rare’s blockbuster 1994 SNES release Donkey Kong Country, one of the greatest platformers of all time and a title that out-performed its console so spectacularly it was closer to 32-bit contemporaries than 16-bit rivals.

It may be a case of the grass looking greener but as a Mega Drive owner (my older sister made the choice, as she made all choices in those days) I always preferred the SNES. The Mega Drive may have had quantity but the SNES had the quality. Where were the Mega Drive equivalents of Mario Kart and Star Fox? When Donkey Kong Country arrived in beautifully pre-rendered 3D he made the all-conquering Sonic look like pixellated roadkill. Rare took a risk by choosing a 3D route – it has been suggested that the operating console of each animator cost £80,000 – but it paid off spectacularly. Compare DKC with early PlayStation platformer Crash Bandicoot and there isn’t much between them graphically. Compare the gameplay, and many will agree that Donkey Kong Country is better.

Great games start at the opening credits, and the presence of a distinctly grumpy old ape with a walking stick and a white beard turning a musical box sets the scene perfectly for the ironic cutesiness of DKC. The bongo music that prevails throughout is perfectly pitched to match the action: inventive, fast-paced platforming where the player can control either Donkey Kong or his babe-in-arms Diddy Kong as well as several jungle contemporaries like Rambi the Rhino, who can be propelled through boxes and enemies to glorious effect. Donkey Kong’s ability to take out enemies by picking up barrels and hurling them was equally satisfying.

Such diversity of gameplay and an abundance of nice touches made Donkey Kong Country a game with real replay value. Both the levels and the various “link” islands from which the player selects their next level (an innovative touch in themselves) have a profusion of secret doors that lead to one-off challenges like collecting bananas underwater with a swordfish and trampolining off barrels to acrobatic effect. In an ordinary game you play a level once then move onto the next one; in Donkey Kong Country you may want to play the same level roughly 700 times.

That’s what we did with the level where Donkey and Diddy find themselves hurtling through a mineshaft in a cart that has the handy ability to jump over the various gaps in the track. At my friends’ house we’d take turns about at tackling the mineshaft, with varying levels of success (a lot for them, zero for me) and it never seemed to get old.

Nintendo’s decision to sign Rare as a second party developer may be one of the best in gaming history. Some have argued that it saved the company. Killer Instinct was delivered at the same time as Donkey Kong Country (and was the same number of streets ahead of 16-bit beat-em-up rivals) and Goldeneye, A Perfect Dark, Banjo-Kazooie, Diddy Kong Racing and Donkey Kong 64 followed for the N64. These titles in themselves made the SNES and N64 both essential consoles. How I never owned either is a mystery I’ll take to my grave (along with familial resentments that aren’t coincidental)

Released just a month before the PlayStation made its bow in Japan, Donkey Kong Country was almost startlingly ahead of its time and yet, in a bittersweet way, marks the end of something, too. As genuinely great as all those titles were, taken as a whole they demonstrate a shift in the dynamic of gaming. Between 1994 and 1998 games did what no one, deep down, really wants to do: they grew up. Cartoony releases still exist but, with the possible exception of Minecraft, they’re no longer the titles that everyone looks forward to. We want zombie outbreaks, terrorism and gothic superheroes nowadays, not fluffy escapism.

One thing I know: if there’s a games console in Neverland it’s a SNES. And Donkey Kong Country is the most worn cartridge.