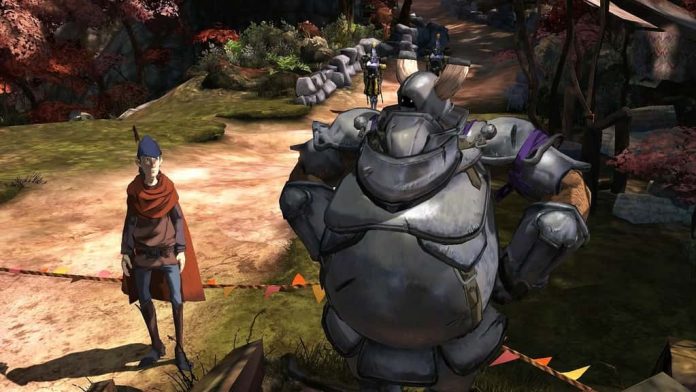 A classic adventure series that started in the 80s, the King’s Quest games passed me by way back when I was a wee nipper. Having played this new entry developed by The Odd Gentlemen however, I’m beginning to think that I may have missed something special.

Thrust into the Kingdom of Daventry, you control a meek aspiring young Knight called Graham. He’s a rather likeable fellow that’s timid when faced with danger or an awkward situation yet finds the confidence to make a wisecrack or two when the opportunity arises. He also just cannot contain himself when excited. Tasked by the King to recover a magical mirror currently being guarded by a huge dragon, Graham gallantly climbs down a well into the dragon’s lair, beginning a perilous escapade that serves as a brilliant opening to this charming adventure.

Cutting back to present day you realise that the story is told quite delightfully by the aged, bed-ridden Graham; you’re basically playing through his (probably embellished) retelling of events as he entertains his granddaughter. Aside from adding to the game’s heart-warming nature, elder Graham’s narration adds a nice touch to the adventure and his puns are sure to raise a smile or two. It also presents a great opportunity for the game to undo any wrong decisions or deaths that befall you in the Kingdom of Daventry, with Graham proclaiming “…is what would have happened if…” before taking you back before the game ending event. Gameplay stays faithful to the series’ roots, with you controlling Graham through wonderfully created environments as you find items and interact with an amusing consortium of characters on your quest to win the king’s favour. With a game world that’s not large enough for you to get truly lost in, yet big enough to give you great sense of freedom and exploration, it’s nice to find that the game does well to largely avoid the usual pitfall of the genre: illogically obscure puzzles. Whilst there were one or two times where I ran around aimlessly, wondering what I needed to do to progress, upon finding the answer it was always something simple that I had just flippantly overlooked. When you’re not adventuring or puzzling, you may find yourself in one of the game’s quick time events, which for a change actually seem natural for the gameplay they accompany.

With its vibrant, colourful graphics and comic book art style, A Knight to Remember looks absolutely superb. The inhabitants and locations of Daventry ooze character and are simply a pleasure to explore and interact with. On the negative side however, the Xbox One version I played for this review exhibited a great deal of screen tearing which was rather off-putting at times. The game’s soundtrack is also suitably top notch, but the real highlight is the voice acting. Every performance is commendable, and with a solid script you’ll enjoy listening to every line, but particular praise has to be given to the incredible Christopher Lloyd as the voice of old Graham, and Josh Keaton as young Graham, both truly bringing the character to life. As the first of five episodes, A Knight to Remember shows a lot of promise as to what’s to come. With its accomplished storytelling, absorbing and varied gameplay, as well as high production values, King’s Quest lives once more. My suggestion is that you jump right in; otherwise you run the risk of becoming the Royal Jester. Surely only a clown wouldn’t want to delve into such a rich world full of joy and adventure?

King’s Quest: A Knight to Remember is available on PlayStation 4, PlayStation 3, Xbox One, Xbox 360 and PC. We reviewed the Xbox One Version.