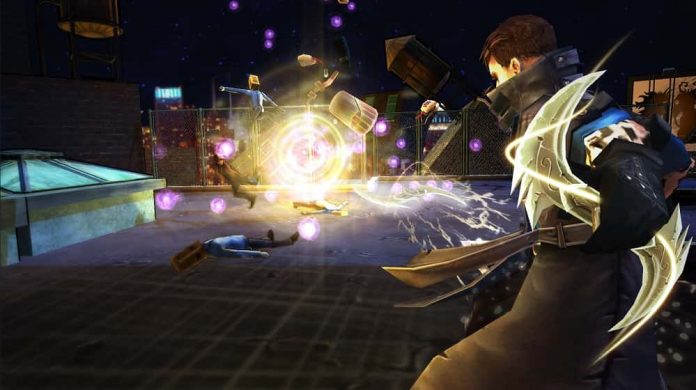 From the French-Canadian games company Clever Plays Studio comes their debut indie game Leap of Fate, where you play as a cyberpunk rogue in a not-too-distant dystopian neon future.

The game is described (on their own website) as “a mix of the infinite replayability of The Binding of Isaac, the precise and reactive controls of League of Legends, and the feel-good combat of Diablo,” with, in my opinion, the shadowy cyberpunk influences of Shadowrun.

Leap of Fate is currently an Early Access game, so there will be gaps, bugs and missing features, namely the other three characters. You can currently only play as a Shadow Mage called Aeon, but the final release of the game will also allow you to play as Big Mo the Technomancer, Mukai the Spirit Channeler and Rasimov the Rogue Occultist.

Upon starting the game, you’re thrown into a tutorial level without much of an introduction – a shame in any case as I find an opening story sequence is the hook that draws you in, making you ask questions: “What happened? What’s going on? Who are you? Who are they?” Aside from the idea that you have to face an enchanted tarot deck to prove that you’re the most powerful mage alive, there isn’t much of a discernible story throughout the game. It’s a shame that more depth isn’t given to answer the questions raised by the mysterious circumstances.

Regardless of this, I was taken in by the graphic style, which is pleasantly reminiscent of comic books and graphic novels. The creepy darkness contrasted by the neon and brightness of a cyberpunk futuristic city really caught the artistic side of me. After the tutorial, you’re presented before some well-dressed man with an eyeball for a head. I’m still baffled as to why; you’re barely told anything about what’s happening, who he is and what you’re supposed to do. Herein lies one of the things I desperately hope Clever Plays Studio will improve: voice acting. You would expect this mysterious antagonist (or helper? Who knows) to have an imposing, powerful presence of a voice, but very little editing appears to have been done to the recordings used and, as a result, he sounds rather unimpressive.

The main gist of Leap of Fate is to confront an enchanted deck of tarot cards and follow the paths they lead you on to face your fate. This cards mechanic is a nifty idea, as it randomises what you face, where you face it and the difficulty of each level every time you play the game – thus providing the aforementioned “infinite playability”. Being a fan of Diablo, I was lured by the promise of similar combat; I do love the awesome satisfaction that you get from these kind of games after killing wave upon wave of enemies. They weren’t lying: whilst not as deep as the experience offered by the likes of Diablo, the combat is just as smooth and satisfying. The controls are pleasantly precise too; wherever your cursor is, your projectiles will fire there, as will your dashes and jumps. The animation is also smooth enough so you feel comfortable that your attacks will hit where you point.

One feature in this game I particularly like is the upgrade system. The skills available to upgrade are dependent on the skill card you selected from the tarot deck, and rather than a bog-standard skill tree, you’re instead presented with a silhouette of your own body and can choose an upgrade related to a body part. Leap of Fate isn’t aimed at the casual gamer; it’s difficult and incredibly fast-paced so if you haven’t got good reflexes, you will struggle. It’s also very unforgiving if you get hurt or die: if you complete a level after being injured, you don’t regain your health. However, if a health pickup drops in a level, you can leave it and it will stay there, so you can always go back to heal yourself. If you die, you are sent right back to the beginning. However, as you play, you earn “Karma Points” and once you’ve got 100, you can cash them in to use a “Continue” when you die. You’ll find Karma points in loot chests and they’re also given as rewards as you progress through the game. Having to start from the beginning with no chance of continuing can be a very frustrating element in any game, so having this potential to continue once you’ve collected enough tokens is a fantastic improvement on that.

So far, Leap of Fate shows a lot of promise. There are some gaps that need filling, particularly with regards to the story, but there is a solid foundation made up of nice graphics, tight controls, enjoyable combat and a great upgrade system. If you have a chance, give this game a whirl!

Leap of Fate is currently in Early Access and is available on PC.