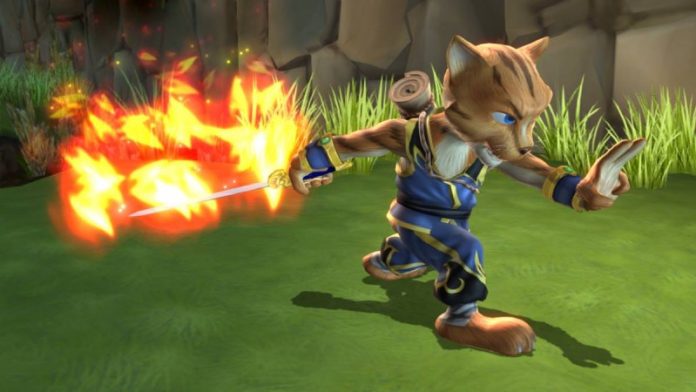 Released on the PlayStation 2 in 2005, it’s rare for an adventure game to go under the radar of an avid gamer like myself, but until the announcement of this anniversary edition I had never heard of Legend of Kay.

Receiving a fairly positive reception upon launch, I can only assume that something about the game resonated with gamers at the time for this HD remaster to exist, but does it still have the same je ne sais quoi to attract gamers 10 years later? Maybe: but only if you can work through some pretty serious flaws.

The adventure begins with the titular Kay undergoing martial arts training in his village. In a land that was previously peaceful, with animals such as cats, hares, frogs and pandas all living harmoniously, tensions are now at breaking point thanks to the invasion of militant gorillas and rats. When the gorilla minister, Shun, closes the martial arts school where Kay is undergoing his training, it all becomes too much for him, and with his master seemingly resigned to the school’s closure he steals a powerful sword and sets out on a quest to put an end to Shun’s reign. 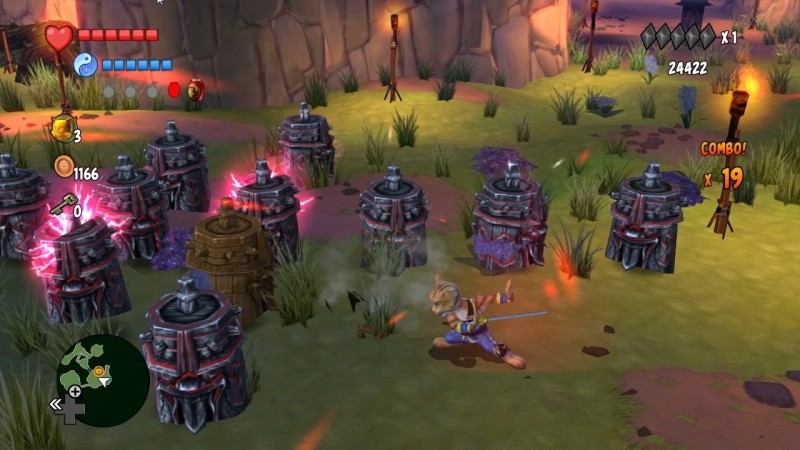 With its cartoon-like characters and colourful graphics it’s very easy to dismiss Legend of Kay as a kid’s game, but whilst it is probably visually appealing to those of a younger age, the challenging nature of the gameplay and somewhat interesting dialogue would suggest otherwise. Even on the easiest difficulty setting the game can only be described as tricky thanks to frequent difficulty spikes; and the occasional bad language throughout may be a cause for concern for some discerning parents. There’s seemingly quite a few bastards in the land of Yenching, and if they’re not a bastard they’re usually getting called something milder yet strangely amusing like gouda face or banana breath. Bastard is as strong as the language gets though, so it’s not all that bad, but its use and the strange dialogue in general appears out of place in a game that on the surface seems to be for a younger audience.

A combat heavy 3D platformer with some limited RPG elements, Legend of Kay offers a fairly lengthy adventure split up into more than twenty chapters, each with their own environments and things to do within them. Whilst some offer no more than a boss fight or an on-rails animal-riding section, most contain optional side-quests that reward you with riches that can be spent at the store, or upgrades for your character, making your journey a little less arduous.

The gameplay is a mixed bag, as whilst the platforming is solid, with Kay being responsive and easy to manoeuvre, the combat can be irksome. With only one attack button at your disposal, you have to combine its use with other moves available such as block, jump and roll in order to create a variety of attacks useful in different situations. For example, performing a roll quickly followed by a jump executes a somersault manoeuvre, and adding the attack button into the mix creates a powerful spinning attack that useful for hitting downed enemies. It’s a shame, as while the combat system shows promise, with a surprising amount of depth considering the singular attack button; it all just comes off as unwieldy. 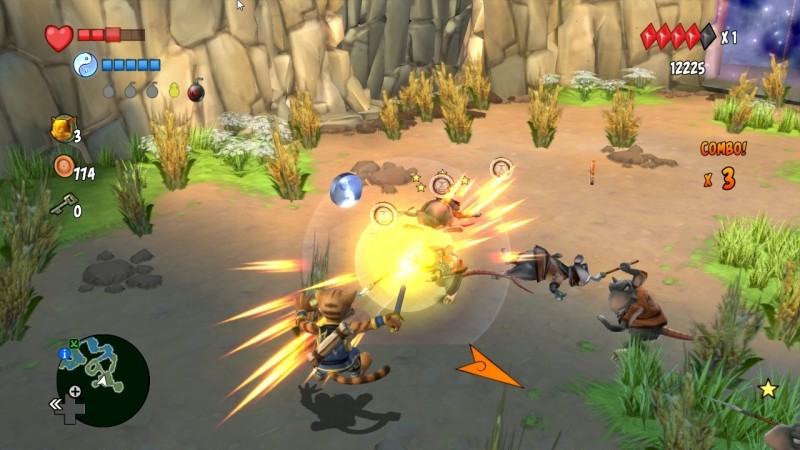 Without the ability to lock on to any given enemy, Kay’s attack’s don’t always go where you want them to go and it also makes it hard to use some of the more advanced moves like the circular roll. There’s also the fact that enemies usually attack you in large groups, and with their pesky AI that likes to make them block most of your attacks, sometimes everything can just get a bit messy, with you not sure if you’re actually hitting anyone or about to get hit yourself. Basically though, what overshadows the whole game and really hampers the combat in particular is the terrible camera that constantly makes everything more challenging than it should be. If it’s not restricting your view when platforming in an enclosed space, then it’s usually giving you an inadequate and sporadic view whilst you’re in combat; frequently hiding enemies off-screen or just trying to disorient you. The issue is slightly remedied by the game’s combo system, which allows you to quickly charge at off-screen enemies thanks to handy markers placed on the edge of the screen, but it doesn’t do enough to eradicate the frustration and general shoddiness of both the camera and combat.

When faced with insurmountable odds, you’ll be happy to know that a powerful magic attack is also at your disposal. Costing five units of energy, using magic is as easy as holding down the attack button until Kay starts to radiate, but its usefulness is limited by the fact that you have to stand motionless and defenceless for a few seconds for it to charge. Given your magic’s devastating attack potential however, the risk of being interrupted by an enemy’s attack is worth it: a successful magic attack is easily capable of eradicating multiple opponents at once, quickly turning the tide of battle.

Starting out with just a sword and five units each of health and magic, you’ll develop Kay to make him much more potent as you journey across the land of Yenching. Either by completing quests, travelling off the beaten path or even buying them from the travelling shop, upgrades can be obtained to increase your attack power, health, magic capacity, and even armor, making Kay much more capable to tackle the tasks before him. Eventually you’ll also discover two new weapons types, giving you access to new skills and combat options. 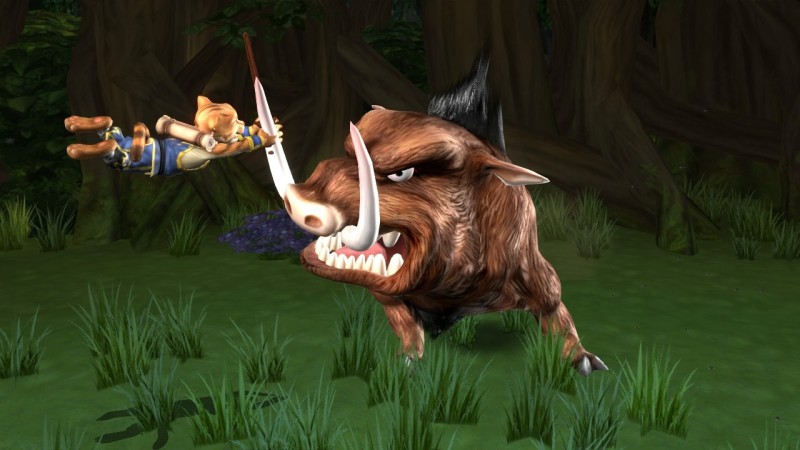 During your time adventuring you’ll explore a laudable variety of locales. From forests to temples, each area has its own distinct feel that manages to keep the game feeling fresh. Unfortunately though, despite the game having its own visual charm, the graphics in general are pretty poor. Being a remaster of a PlayStation 2 game, it shouldn’t be that surprising that environments are technically very basic, with poor textures, foliage and effects. On the plus side however, character models have been given a noticeable amount of attention which makes them look fairly detailed, and everything runs very smoothly with no noticeable framerate issues.

What really stood out as a positive for me was the game’s beautiful soundtrack. Combining soothing tracks for when you’re exploring, with some suitably rousing tracks when engaged in combat, Legend of Kay’s music is constantly a pleasure to your ears. The same can’t be said for the voice acting though. Whilst Kay’s lines are usually delivered well, along with one or two of the other supporting characters, most of the NPC voices are rather strange and irritating. It doesn’t help that you can’t cut dialogue short when you’ve started talking to them either; you have to sit there and listen to their woefully delivered lines until they’ve finished blabbering.

Overall, even though Legend of Kay Anniversary is a flawed game, I still found myself enjoying it a fair amount. Yes the combat is substandard, and the camera is generally awful, but it just has some of that old-school 3D platformer charm that is missing from a lot of the more modern entries in the genre. Whilst its issues mean that it’s certainly not a game for everyone, those that harbour nostalgic thoughts of the original or are just looking for a lengthy adventure may want to check this title out.

Legend of Kay Anniversary is available on PlayStation 4, Wii U and PC. We reviewed the PlayStation 4 version.