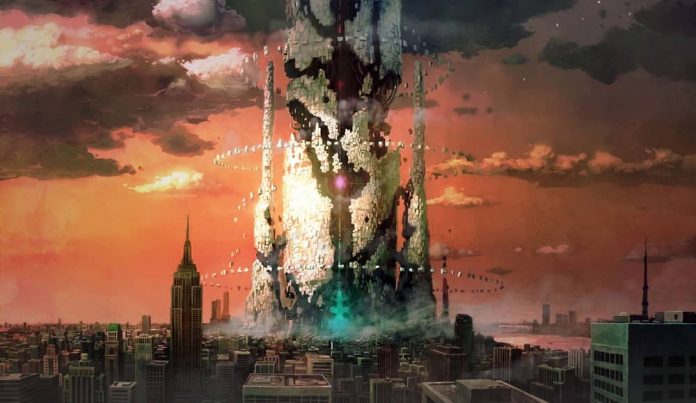 “The End” is here. Well, that’s his actual name but he’s hell-bent on destroying the world unless a group of highly-trained mutants can stop him! Not those mutants, though: mutants with guns, swords and enough backstory to fill a novel.

That is until you make a pink-haired schoolgirl punch a robot to death, then everything goes out of the window. Make no mistake, this is a JRPG and it isn’t afraid to show it. That might sound negative, but it honestly isn’t. Load it up, and you get hints of Metal Gear Solid, Shin Megami Tensei: Strange Journey and even Time Crisis. You’d be forgiven for thinking that sounds like an odd mix, but it works surprisingly well. Sometimes.

“Match up perfectly, and the battles are a breeze, with rewarding ranks and EXP given afterwards. Cock up, and it’s an embarrassing defeat and back to the drawing board”

From the off, there is an emphasis on planning your battles. Lost Dimension is classed as a tactical role-playing game, so your tactics are a core aspect of the game. Certain enemies are weaker against particular attacks, which specific members of your team have at their disposal. Match up perfectly, and the battles are a breeze, with rewarding ranks and EXP given afterwards. Cock up, and it’s an embarrassing defeat and back to the drawing board. During said battles, if you attack an individual enemy (the only way you can attack) any nearby teammates will chip in with an “Assist”. Even the mini-bosses can be quickly reduced using this system, especially with six characters in one battle, each getting five assists on every turn, for example. The difficulty does start to increase relatively quickly, but you level up just as fast. Even without the levelling system, every character can bring something different to the table: everyone has a unique “Gift” ability – the use of which rewards you with “Gift exp” in battle which allows new abilities to be unlocked for said character. Some gifts are more effective against certain enemies, and some will provide momentary advantages to your team. If you cannot reach the battle, or have a particularly strong character, the “Defer” feature allows a player to pass their turn to an ally. There is also a “Berserk” feature that deals huge amounts of damage. When a character becomes berserk they will hit both allies and enemies alike in the same turn, which can alter the tide of a battle without warning.

“On each playthrough, a different traitor is selected and it becomes your prerogative to work out who it is and eliminate them”

You’re free to upgrade character weapons, abilities and items as you choose, before every battle or once in a blue moon if you’re so inclined. You could honestly spend hours tweaking the stats of the characters to get the optimal layouts, and spend twice as long going through the dialogue and backstories that pepper the plot with wonderful detail. The latter part is a key element of gameplay, as nothing is just “told” to you – you have to find out. Talking to your teammates is necessary as it uncovers plot information, personal doubts and individual strengths. Choose the right conversation path, and you increase your camaraderie, working better as a unit when out in the field. This also forces you to try and dig out the ‘traitor’ that The End is quick to highlight in the opening dialogue. On each playthrough, a different traitor is selected and it becomes your prerogative to work out who it is and eliminate them. Get it wrong however, and you could kill an innocent team member. Quite why a specialised team take his word for it instantly is never explained, which strikes an odd chord but at least gives another layer of depth to the plot. But what about the earlier game mentions? Well, Lost Dimension shares the tactical thinking from Metal Gear and comes with the same tight controls. Both feature fantastic soundtracks and very detailed plots, although I’m not sure a game could ever be completely on-par with Metal Gear‘s original plot. From Time Crisis you get the compact level designs with quick-flowing action, complete with similar animations and sound effects during the battles. And lastly, what about Shin Megami Tensei: Strange Journey? Well, considering that this game is developed by Lancarse, the same developer behind Strange Journey, both games share similar character management systems and visual design, although Lost Dimension is certainly the prettier of the two. The anime-style 2D characters are fantastically animated and detailed, each with an impressive list of individual characteristics, and whilst the environments aren’t the nicest in terms of visuals, they are detailed enough to satisfy most.

“The anime-style 2D characters are fantastically animated and detailed”

As good as its looks may be, Lost Dimension is not without its problems. Although it is supposed to be centralised around tactics, I rarely changed my character layout that I established in the early levels. Six characters, four armed with upgraded guns and two armed with upgraded swords would make mincemeat of every enemy they encountered, even in a one-on-one scenario. When together in groups of three or more, even the level bosses would be felled without issue when the “Assist” attacks came into play, with all battles gaining “A” rank or higher. This removed a sense of challenge, but also took out the core of managing your team effectively. Towards the end, I even stopped interacting with my teammates in-between missions, because once I had a group that worked – and had coincidentally discovered the traitor – there was little to be gained from going through the dialogue menus. The game also seemed to suffer from several quite serious bugs. I’m not sure if it was just my game that suffered, as I’ve not been able to find any other instances, but during the dialogue exchanges, the entire sound would just cut out, with characters saying sporadic words and eventually falling silent. It even happened on occasion to the soundtrack. During gameplay, characters would frequently become “stuck” in their movement arcs, either being limited to moving in a single direction, or getting stuck entirely without warning or reason. This could often be quickly resolved by pressing reset, but it became a common problem. Speaking of gameplay, the framerate suffered terribly too if things got a bit busy on screen, and would often chug at a rate only just above a PowerPoint presentation. And finally, this game suffers from a severe case of repetition. Characters will often reiterate the same points numerous times and drop their own quips into the conversation, whether it was needed or not, and battles will soon start to take similar layouts requiring identical tactics to secure victory. But when that occurs, just close your eyes and enjoy the soundtrack… until it randomly drops out.

“Speaking of gameplay, the framerate suffered terribly too if things got a bit busy on screen, and would often chug at a rate only just above a PowerPoint presentation”

Overall, Lost Dimension has plenty to offer. Fans of JRPGs are bound to find something to keep them hooked, whether it be the gorgeous animations or deep and intricate plot. It’s unfortunate that the game is marred with more than its fair share of bugs, and just too much repetition. It’s also a shame that the game is pretty repetitive. Did I mention the repetition?