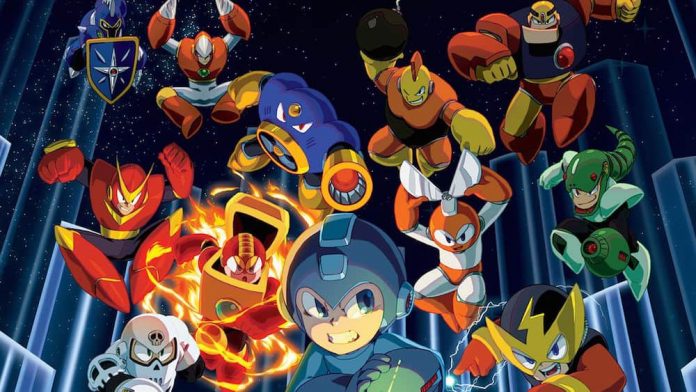 Renowned as one of the greatest game franchises of all time, Mega Man crashes onto current-gen consoles and PC in this collection of NES releases from 1987 to 1993.

With six games for you to blast through as the Blue Bomber, is Mega Man Legacy Collection worthy of your cash? Maybe. But only if you’re a devout fan of the titular robotic hero.

Normally, six games as well as an assortment of bells and whistles for the sum of £11.99 would feel like a bargain, but after Rare spoiled us with their Replay Collection just a few weeks ago – offering a gargantuan 30 games wrapped in an absolutely sublime package for £19.99 – it now feels a bit… stingy, especially considering the age of the titles and the bulging back catalogue of Mega Man games available. Still, this is the Legacy Collection, so I guess it’s fairly understandable. So, the question remains: are the ports actually any good? Largely, Digital Eclipse has done a great job of bringing these retro classics to new formats. Each of the games on offer both look and sound just as you’d expect – they’re successfully faithful to the original releases, even down to the slowdown that occurs when things get a bit hectic. As per the norm for these types of retro collections, you can choose to play each game at their normal aspect ratio with some pretty attractive borders, or have the image stretched to fullscreen, as well as apply some cool filters that give the impression that you’re playing the games on an old CRT TV or monitor. One thing I did notice however, particularly in the original Mega Man, is a slight delay in controller input. Having played the game on a new Sony Bravia, boasting one of the lowest display input lag figures out there, this was a bit disappointing and also quite infuriating. The Mega Man games require precision, and without controls that feel tight some levels become a test of patience rather than skill.

Famed for their brutal difficulty, you’ll need reflexes like a ninja to make it through all six games on offer without breaking into a controller destroying rage, but at least this collection offers a crutch for those finding things just too punishing – a save state. Allowing you to save your game at any point, your single save state allows you go back and try those tricky sections again and again without losing your progress and also possibly your sanity. Purists will no doubt see this as cheating, as well as the rapid fire button that has been added to all the games, but the fact is they’re optional; you don’t have to use them if you don’t want to. Regardless, at least they make the games more accessible to those new to them, or those really struggling to make progress. No collection is complete these days without a plethora of extras, and Mega Man Legacy Collection is no exception. Fans will be overjoyed with the databases available for each game, providing a short bio and stats for all the characters and enemies that feature within them. They’ll also be pleased by the museums featuring vast amounts of artwork, and the music player that allows you listen to the tracks from all of the games. But what they’ll probably enjoy the most are the challenges that add a great deal of content to the package.

Initially only a few challenges are available, tasking you with either beating a boss or completing a series of stitched-together segments of levels within a set amount of time, but as you complete them more and more become available, getting more elaborate and difficult as you go. Overall there are more than 50 challenges on offer, providing some serious playing time for those hell-bent on completing them all and a great diversion for those that don’t want to tackle one of the main games. In a stroke of genius, there are leaderboards too, so you can see how your attempts at the challenges stack up against your friends, spurring you on to strive for better times. Those that do want to improve their skills would be wise to make use of the feature that allows you watch replays of completed challenge attempts from the leaderboards, enabling you to observe other player’s strategies in order to develop your own. Overall, Mega Man Legacy Collection is a release that long term fans of the little blue robot will absolutely adore despite the odd hiccup, thanks to the faithful representation of the games on offer and the myriad of extras included in the package. Unfortunately those that have never played the games before will probably find nothing here to draw them in though. Whilst the series’ brutal difficulty is a hit with the fans, newcomers will more than likely be turned off by the somewhat unfair and unashamedly retro gameplay. Granted, the ability to save your progress is a great help, but without the rose-tinted glasses of nostalgia, the games just don’t have the attraction that they used to have. Whereas Rare Replay felt like an introduction of a company’s rich history to a potential host of new fans, Mega Man Legacy Collection feels more like an encore, treating those that enjoyed the prior performance to one last taste before the curtains are closed.

Mega Man Legacy Collection is available on PlayStation 4, Xbox One and PC. We reviewed the Xbox One version.