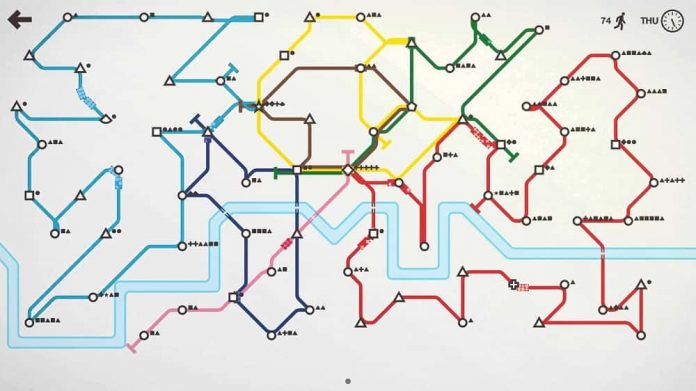 Mini Metro is a game developed by Dinosaur Polo Club. It’s a mass transportation creator and simulator in which players have to build an integrated transport system in some of the world’s largest cities, juggling limited resources and trying to meet the requirements of an ever-expanding location.

Players start off in the city of London and are responsible for the creation of a transport network in the city. To begin with, you only need to connect three locations; you have access to three sets of lines, and trains to run on each of them. It’s a simple matter of just clicking and holding on a station and dragging a line from there to the next station. These stations can then be connected to the next station via the same line, or begin a new one. Provided there are enough trains to run on the lines, they will automatically be added to a new line once made. As the level progresses, more stations appear, and players receive new items in which to make their already existing lines as efficient as possible. The game uses a nice and simple 2D interface that represents transport maps from cities around the world; the most recognisable perhaps being the London Underground map and uses shapes of different kinds to represent specific stations. Depending on the chosen game mode, players are tasked to fulfil certain criteria in order to complete the level as well as possible.

In normal mode players just need to connect the cities up with each other. The level ends when one station becomes too overcrowded. Endless mode is basically like a sandbox, but with a desire to make the network as efficient as possible. It doesn’t have a specific end goal, but continues until the map has reached its maximum size. Extreme Mode, as given by its name, is the most difficult game type. Whilst Normal and Endless mode allow the player to move track around once placed, in Extreme mode, once placed, track cannot be moved except for when extending it. Just like Normal mode, the game ends when a station gets overcrowded. It sounds like a simple enough game, right? Wrong. The game does come with its own little obstacles that need to be overcome. You may not need to worry about finances, moving round or deleting objects such as trees, hills or a house, but there are other obstacles and situations to consider. First, there is the large number of rivers in the game maps. Getting over or under these can be done by building bridges or tunnels, however these are in limited supply, and when receiving upgrades, players need to make a choice. With each upgrade, you’ll get a train guaranteed, but then have a choice of two other items, and if you decide not to get the bridges or tunnels, you may come to regret that decision later on, particularly when faced with the possibility of a station being on an island. Another obstacle is that certain passengers want to go to certain stations. Right now that consists of triangle customers wanting to go to triangle stations, circles to circle stations, squares to square stations and so on. Some shape stations are more common than others, and so lines will need to connect to other lines in order for passengers to get there. Trains can only hold so many people however, so players will need to add more trains and carriages to lines to increase transit while all the time worrying about people across the river and the overcrowding issue in stations.

There is a lot to consider as you play this game. It is a nice simple puzzle-like game that combines the artistic style of several of the world’s largest transport hubs with addictive and simple game mechanics. The game is not without its issues however; for me, the most notable issue is a lack of sound effects. Whilst there’s a pleasant ambient soundtrack in the background, the lack of any other sounds means the game misses out on an element of character. There are no sounds of a busy city expanding, or commuters going from location to location. I also find that the need for shapes to go to certain stations could be made harder with them needing to go to more specific ones, like triangles going to a specific triangle, not just a random one nearby. Altogether though, Mini Metro is really enjoyable. Its simple graphics combined with the ease of playing make it accessible to even the most casual of gamer, and the level of extra detail means that you’ll want to keep playing. The randomly-generated levels mean that no two games are ever the same, giving plenty of replayability. Despite a few issues, Mini Metro is a really enjoyable way to pass whole hours at a time.

Mini Metro is available on PC.