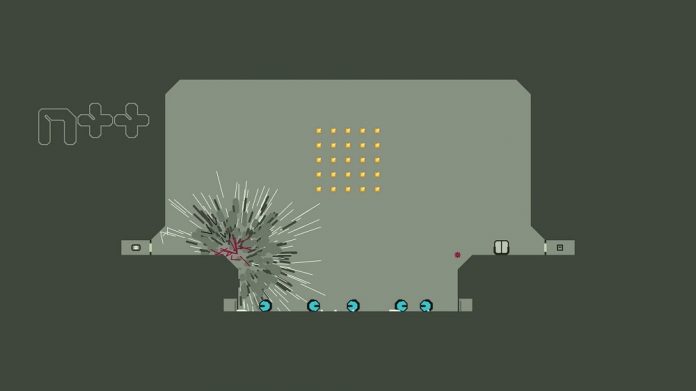 People think that living life as a ninja is cool. That it’s all about keeping in the shadows, doing acrobatic jumps, throwing a few shurikens and generally just being a sneaky bastard. I’ve got it on good authority that they’re wrong though, at least for the unfortunate little ninja confined in the world of N++.

Trapped in a series of dastardly rooms filled with hazards, our little stick thin ninja has an estimated lifespan of just ninety seconds, and in my experience that’s a generous estimation. It’s just as well then, that he has a strange knack for reincarnation. Able to bring himself back from the dead at the entrance of the room he died in, he’ll have to face all too many deaths at the hands of bombs, missiles and extreme bodily trauma before he’ll get a reprieve. It’s all probably quite horrifying for him really, like a cross between the films Saw and Groundhog Day. A physics-based platformer, N++ pulls no punches. With over a thousand levels spread across a range of game modes, as well as the ability to create and play user generated levels, it starts hard and just gets harder until it’s impenetrable like a diamond. Controlling your hapless ninja, the aim is to navigate through sequences of five small levels, hitting the switch that opens the exit in each before travelling through it. The trouble is you only have 90 seconds to finish those five levels, meaning that you have to think fast and move even faster if you want to succeed. Additional time can be obtained by collecting pieces of gold, but as these are often troublesome to get, you’ll have to make tough decisions as to whether you’ll spend time collecting them all or not. With your performance scored at the end of each level however, those wanting to chase high scores on the worldwide leaderboards won’t have much choice – you’ll have to collect all the pieces of gold and move like greased lightning if you want to place highly.

Your trusty little ninja is quite an athletic fellow, able to elegantly leap a fair distance and both jump off and slide down walls. He’s also able to make use of the laws of physics to utilise the environment in order to gain momentum. This means that whilst your wee hero has a narrow moveset, there’s a great deal of depth as to how you use it. In fact, you’ll need to learn to use your moves in great detail if you wish to get all the gold in the levels for that all important All-Gold badge. Each level presents its own little challenge, with both environmental hazards and sentient constructs out to stop you. When you’re not being shot at, exploded, crushed, catapulted at the ceiling or otherwise maimed in any number of ways, you also have to be careful how you fall. Plummeting to a horizontal surface from a considerable height will only ever result in a fresh ninja pizza, so you must consider your environment and try to land on slopes where available. Aside from allowing your ninja to remain alive, landing on slopes also gains you a considerable burst of momentum, enabling you to move quicker and jump higher.

It’s unfortunate that whilst the game requires you to make use of momentum, it never really explains it to you. Players that have played previous entries in the series will no doubt jump straight in and understand what they have to do, but those new like me may find themselves quickly puzzled by the challenges on offer. The issue is alleviated somewhat by the fact that you can watch a replay of any player’s run through a level, but what would have really been of use is an actual tutorial or more informative introductory levels. Regardless, the replay feature is a great addition, enabling you to uncover new strategies and skills for you to emulate as you try to get those pieces of gold that seem just out of your reach. Aside from the main story mode, the game also features co-op and race modes to bolster its content and mix up the gameplay a little. While the story mode is already brutally difficult, co-op mode often pushes the challenge even further, with you and up to three friends having to work as a team in order to complete levels. Sometimes some of you may even need to be sacrificed in order to achieve this goal – who has to take the fall is up to you! Race mode on the other hand sees you trying to complete levels as fast as possible, and reaching the exit spawns a missile for the other remaining players to avoid. All in all, multiplayer provides fast, frenetic fun that is sure to entertain in great measure.

The minimalistic visuals of N++ will not be to everyone’s tastes, but their primitive nature keeps everything looking clear and the framerate silky smooth. Also, whilst your ninja is just a little stick man, he’s the best animated little stick man I’ve ever seen, oozing grace and fluidity. It should also be noted that you can change the visuals to your own personal taste too, by applying themes that change the colour scheme. Backing up the visuals is a fantastic soundtrack that features a vast number of tracks; each and every one of them suitably spurring you into action.

Simple, gruelling, but ever so addictive; it’s hard to not be charmed by N++. There’s so much content here it could honestly last you a lifetime – especially considering the inhuman difficulty level of some of the more advanced stages. In fact, the insane difficulty is about the only thing that may be an issue with the game – for many the challenge will possibly be insurmountable from quite early on. Regardless, those that feel up to the task will find a hugely rewarding game more than deserving of their time.

N++ is available on PlayStation 4.