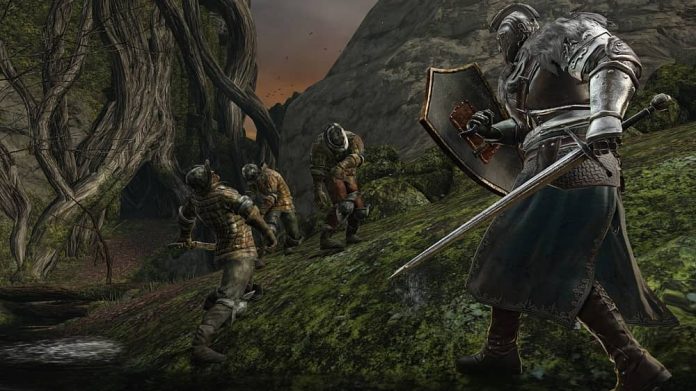 I was first introduced to the Dark Souls series by an old housemate who swore by the game. He explained all the complex game mechanics to me, the odd art style and characters, all the quirks and eccentric twists dotted through out the experience, and I just couldn’t piece it together in my mind. How can game design be so scattered and frenetic, yet still maintain a coherent theme throughout? Or, if you will, a soul?

The answer to that is easy. It doesn’t have to be coherent. Dark Souls and Dark Souls II  are a rare breed of game, one that almost never happens, one that has its own beat, marches to its own drum, and takes no inspiration from anywhere else. Yes, Dark Souls is a completely 100% unique type of video game. It blends RPG with hack-and-slash combat mechanics, but it’s also very stat heavy. The slightest tick of a percentage can make all the difference in your skills. It’s all based on numbers, maths, patterns. It tells you that you need a certain number of percentages to have access to this particular set of gear.

The combat itself, while seemingly arcade-like on the surface, after five seconds of play will tear all of those assumptions to shreds. Combat is slow paced and methodical; the rash of thought is punished quickly in this game. Think you can rush in and slice an enemy to pieces? Think again. He has the same thought. No, combat is more about watching your enemy: watching his footsteps, waiting for him to slip up. Waiting for him to pounce on you and mess it all up so you can plunge your sword into his back for a killer blow. At first, it feels like an odd bastardization of hack-and-slash mechanics, but the slow pace is welcomed. It’s entirely possible to be killed by the weakest enemy in the game simply because you weren’t concentrating properly – and I love that about Dark Souls. I am on equal footing to the many enemies populating this odd, petrified game world, and though my stats are better, a simple mistimed sword attack could spell my end.

Oh, and did I mention it’s possible – no, certain – that you will die in the tutorial of the game? Because I did. Three times. Welcome to Dark Souls. Dark Souls II is a journey, too. A pure, RPG, fantasy journey. In a lot of ways, it feels a lot like wild tales you would be told as a child by a doting, imaginative grandparent. Often you’ll be in the pits of a dungeon, or in places with dark, forboding names such as The Black Gulch, or The Gutter, to more grand locales like Sinner’s Rise, Forest of the Fallen Giants and the Dragon Shrine. Each location in game is a strange, beautiful mix between once-populated and still semi-alive. Wandering around the obliterated locations gives the sense that something used to be here, but isn’t any more. The idea that life still pulses through these old lands but to what extent is completely unknown, hidden from view. It reminds me of the feelings you’d get visiting an old English seaside town, where tourism has left its inhabitants behind and they have been left to wander the beachside arcades looking for old friends.

And of course, there’s the oft-discussed difficulty level of the game. Yes, this game will reach some terrifyingly frustrating highs, but what is it about the game that keeps you playing? Frustration like this in other games has turned me off. It’s the sense that the game is enticing you into playing further.

When you die, you don’t feel like the game is being unfair. No. It’s like a stern father, believing in you, but wanting you to strive further, play a little harder. And just as it plops a preposterously difficult task in front of me, I have wanted to rise to the occasion every time. Late in the game you are confronted by a dragon, a tough, fire breathing dragon, and you are trapped inside his bird cage high atop a giant tree. I lost count of the amount of times it took me to beat it but with the aid of some co-op buddies I managed it, but to my horror, stepping out of the treehouse, and through a subsequent mountain pass, the vista that greeted me was of a sky full of the same exact dragons, all swooping down, eyeing me up, daring me to step forward. “No,” I thought, “No way.” Oh yes. This game is really that cruel. Dark Souls is strange. It doesn’t want you to play it. It dissuades you at every turn. It kills you with traps, backstabs you with skeletons, places NPCs in the world that will turn on you after using you for all your worth,  andthrows bosses at you that you’ll swear you can never defeat. It even has the gall to leave the bloodstains of other vanquished players, fighting the fight just like you are, to show you how they died, their dead souls trapped within the game to remind youthat you’re not  the only one dying all the time. I’ve never played a game that at once makes you feel terribly small, but also elevates you to such highs after applying yourself just a little bit.

And this is where I mention the awesome online integration. Without this, Dark Souls would truly be a brutal, punishing, tiresome experience. The shared experience of struggling through this hostile world, together, online, really gels all of these elements together; all of these odd, strange, misplaced elements, that shouldn’t work (and yet, for some reason they do). Teaming up with some random, struggling survivors just like you creates a truly humble sense of sharing that I’ve yet to see in any game, even in MMO’s like World of Warcraft. You’ll never be more grateful than you will for a wizard joining your game to help you crush a tricky boss or help you through an awkward segment of the game. Messages from other players are scrawled on the floors, and From Software has done a good job policing the content of the messages by using a system whereby you construct what you want to say from various phrases and words, making it all the more fun to break by trying to make naughty words. As the credits rolled on Dark Souls II, I had a strange feeling; I felt as though I had no idea what I would do next. This game had consumed 50 hours of my life. Every day after work I would immediately throw all my stuff on the floor, throw some food in the oven and eat as fast as possible, all so I could spend the evening ploughing my way through this fearsome, beautiful, lonely yet shared experience called Dark Souls. And even though none of the game elements should work, even though it’s unreasonably difficult, even though it wants to stab you in the back and trick you, something about all of this just works. I don’t know what magic they used, but it was irresistible, and I can’t wait for the next offering.

Even now, after returning to the Far Fire after beating the final boss, the game is teasing me with an option to “begin journey 2” and I have no idea what that means. It could be a trick, or it could be a gift. What a great tease.