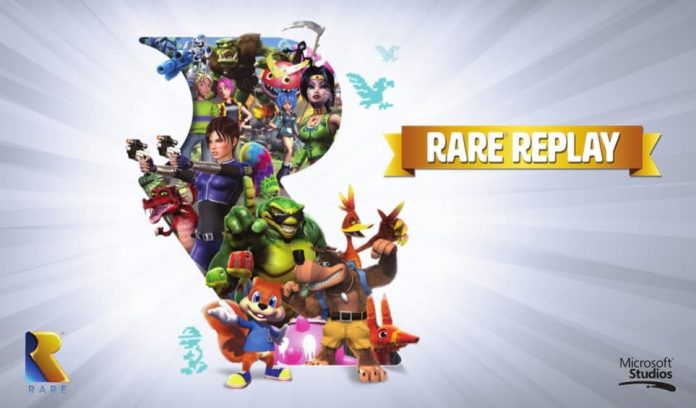 As someone that has admittedly not played many Rare games, the announcement of Rare Replay was a nice surprise for me. Promising a collection of 30 titles from Rare’s rich history and a gargantuan 10,000 gamerscore, who wouldn’t want it? Well now it’s here, and after spending some considerable time with this little slice of history I can tell you that it’s a mixed bag – although a very well-polished one.

From the moment you boot Rare Replay up, it’s instantly apparent that a lot of love and care has been put into creating this package. Opening with a charming musical number and presented like a major theatrical event, Rare Replay feels suitably like a celebration, and this grandiose exuberance permeates the entire collection. The menus for example are magnificent; managing to be highly informative, yet engaging and visually appealing at the same time. The main menu is like a lobby of sorts, adorned by two posters that take you to the Rare Revealed special features menu and also the innovative Snapshots mode. Between them though, is a framed picture that takes you to the main event – the Game Gallery.

The Game Gallery is, unsurprisingly, where you can browse the catalogue of games on offer, enabling you to view your milestones achieved in any given game, as well a view a brief description and of course launch it. Each game is wonderfully emulated, with numerous new features available to many such as the ability to save and load game states, rewind time and a nice CRT filter. With 30 games on offer ranging back from the Spectrum all the way up to Xbox 360, there’s great variety here, but unfortunately the quality of the games is sometimes questionable. With a nostalgic mind the truly retro titles like Battletoads, Snake Rattle n’ Roll and Sabre Wulf may hold your attention, but to newcomers like me they are dull and impenetrable. Luckily however, as you make your way through the collection you’ll find at least a handful of titles to enjoy. The inclusion of Xbox 360 releases, such as the Perfect Dark remaster, Viva Piñata and Kameo: Elements of Power are pretty much worth its measly price of £19.99 alone, and you’re sure to find many more to sink your teeth into along the way. The biggest surprise, and perhaps the highlight of the package, Snapshots is a really neat mode in which you can play challenges in a range of the collection’s older titles. Playable in playlists or individually, each Snapshot will test your skill at the game or mix things up a little and ask you to do something out of the ordinary. For example you may be asked to collect 28 stars that litter the track in R.C. PRO-AM before your competitors finish their race, or simply kill 10 bubble aliens within 30 seconds in Jetpac. Even though I wouldn’t go back to play most of the games featured in this mode as they were originally released, the Snapshots mode had me revisiting them again and again thanks to its short and engaging range of challenges. It also helped that completing each Snapshot granted me a stamp, which act similar to experience points in that earning them enables you to improve your rank and unlock new features.

You’ll most likely want earn stamps in order to unlock videos in the Rare Revealed gallery. A wide range of videos are on offer such as “making of” features for various games as well as glimpses into Rare’s history. It’s actually a shame that they’re locked though, as it will take you a considerable amount of time to obtain all the stamps necessary to unlock them all. Aside from earning stamps via the Snapshots, they can also be earned by completing various milestones across the 30 games in the collection. It’s worth noting though that whilst many are simply gained just by booting each title up, others can be extremely strenuous or time consuming to obtain. Overall, Rare Replay offers outstanding value for money. With its excellent presentation, huge list of games and a plethora of behind the scenes features, there are many hours of nostalgic fun to be had by all. Sure, some of the games have aged badly and are nothing more than a novelty now, but you’ll find some corkers on here that’ll make the purchase worthwhile, especially if you’ve never played Rare’s Xbox 360 output. It’s just a shame that all the Rare Revealed extras are locked, as completing milestones on some of the older games in order to grab the required stamps will be very draining. Regardless, this is a retro collection done right, and deserves to be in your game collection whether you’re a fan of Rare or not.

Rare Replay is available on Xbox One.