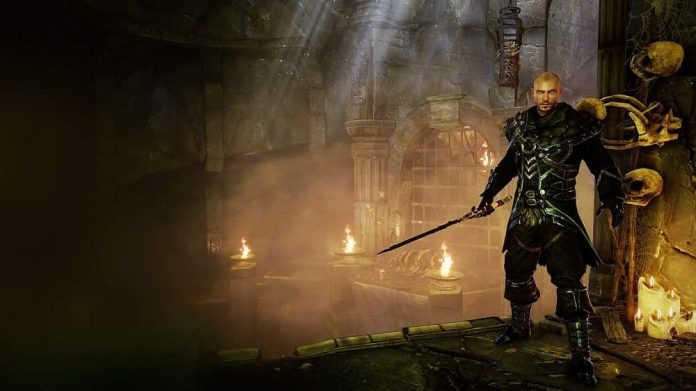 So, as an avid PlayStation 4 owning adventurer you’ve completed The Witcher 3, seen all it has to offer, and still have a craving for more gritty open world action. What title do you turn to next?

There’s not much choice really aside from the disappointingly dull Elder Scrolls Online and the decidedly average Arcania: Gothic 4. But never fear, Risen 3: Titan Lords Enhanced Edition is here to fill the void, or at least, try to. While this absorbing journey into distant lands is largely enjoyable, it has numerous issues that hold it back from being on the same level as CD Projekt Red’s magnum opus.

When I first booted up Risen 3 I feared the worst. Thrown into a tutorial of sorts amidst a battle out at sea, the framerate was atrocious and the graphics disappointing to say the least. The whole scene quickly turns out to be a dream – or rather a nightmare, as it were – and upon waking I thankfully found that it was misrepresentative of the actual game before me. On a tropical island, awash with flora and fauna, I was surprised to see that actually the game looks pretty good. And not only that, but it runs fairly well too. In fact it’s probably the only area where it excels over The Witcher 3, but then that’s not saying much when you consider that Geralt’s quest often turns into a slideshow.

The game begins with our intrepid hero (or anti-hero, it’s up to you) heading to investigate an old temple with his sister, spurred on by the rumour that it holds great treasure. Unfortunately for the duo, an encounter with an undead creature leaves our hapless lead as dead as a dodo. Being a videogame though, it isn’t long after his death and tearful burial that a strange shamanic gentleman comes along and revives him. Or maybe I should use the term “reanimates his corpse”, as unfortunately he no longer appears to be in possession of his soul. Cue an adventure that will see you hopping between islands, sorting out everyone’s mess but your own, all the while trying to figure out exactly how you’re going to get your precious soul back. Simple really. If you’ve ever played an open world adventure (which I imagine you will have done) you already know how this game plays out. Upon being reanimated you’re given a rather broad quest in order to retrieve your soul. After a bit of exploration and a few chin-wags with some locals however, you’ll find your logbook of quests bolstered by some more menial tasks, requests and profitable opportunities for you to engage in, if you so wish. Often, these will require you to get in your ship and set sail to another island, and inevitably upon arrival you’ll find even more quests to be added to your now bulging logbook. In fact, it can all be a little daunting. After a few hour of play, you’ll have so many quests to do that it’s hard to figure out which ones are best to do first, or even which ones will actually progress the main story. Regardless, you’ll soon find yourself digging in, making a name for yourself in the world, and being rewarded with a healthy amount of gold and glory.

Being the two main currencies in the world, you’re going to want a lot of both gold and glory. Working in the same function as experience points, glory can be spent to improve your characters stats in numerous ways. Whether you want your soulless avatar to be a surly brute, high on strength and toughness but low on brains, or a sly fox, skilled in lockpicking, long ranged combat and boasting a silver tongue is up to you. Every option has its strengths and weaknesses. Gold on the other hand is used just as you’d expect: to buy supplies and equipment when required, providing you find a vendor. If you have the required stats, you can also use gold to pay various trainers littered across the game’s numerous islands in order to further increase your stats and abilities. Whichever way you build your character, you will find that it’s a rewarding endeavour, if only to make the game’s rather shoddy combat more manageable. With a simple combat system that relies on timing rather than button bashing, your first few hours of Risen 3 will be the most frustrating. Starting with only a simple sword and pistol to your name, engaging in battle will see you tearing your hair out and cursing the controls until you’ve raised your stats and learned a few abilities. After drawing your sword with the circle button you have limited options initially. You can attack with the X button, tapping it for a quick slash or holding it down longer to produce a more forceful blow, block with the right trigger, which is not as useful as it sounds, or dive with the square button. Once you’ve got into the flow of following up attacks just as you’ve made contact with the previous blow, the combat becomes more manageable, but if you’re faced with multiple opponents it’s still rather troublesome, with them frequently attacking you from offscreen or knocking you down, allowing them to get a few free hits in. If you build a character that prefers firearms or magic then you may find the combat less problematic, so that is definitely an option if you want a less stressful ride early on, but to be honest once you’ve gotten a fair distance into the adventure the combat becomes fairly trivial anyway, as the enemies don’t seem to scale in strength with you and you’ll have built up a more useful skillset.

Like a B-Movie, Risen 3: Titan Lords Enhanced Edition hasn’t got the production values of a AAA release, but what it does have is charm. The voice acting ranges from plain terrible to terribly amusing, and is also full of foul language which I found to be hysterically unnecessary. The graphics look nice, but they’re marred with wonky animations. Like everything in life, you have to take the rough with the smooth, and with that in mind it’s a wonderfully enthralling game that will eat up hours of your time without you realising should you just accept it for what it is. Yes, it has its troubles, like its annoying combat system, but there’s more than enough here to compensate for it. There’s no carrying or weight limits for one, which is always a plus in my book. All in all, Risen 3: Titan Lords Enhanced Edition isn’t a great game. It is however a jolly good one. Featuring numerous islands full of people to meet, creatures to kill and quests to complete, you’ll find something to entertain yourself for many an hour. Whilst the combat may at first seem to be horrendously bad, with some persistence and character development it eventually falls into place, and the quality of the adventuring on offer makes it all worth the while. This may not be up to the lofty calibre of The Witcher 3, but it’s an enjoyable romp in its own right, and one that is certainly worthy of your time should you have finally broken free from Geralt’s inhuman grip.

Risen 3: Titan Lords Enhanced Edition is available on PlayStation 4 and PC. We reviewed the PlayStation 4 version. Buy a copy from Amazon