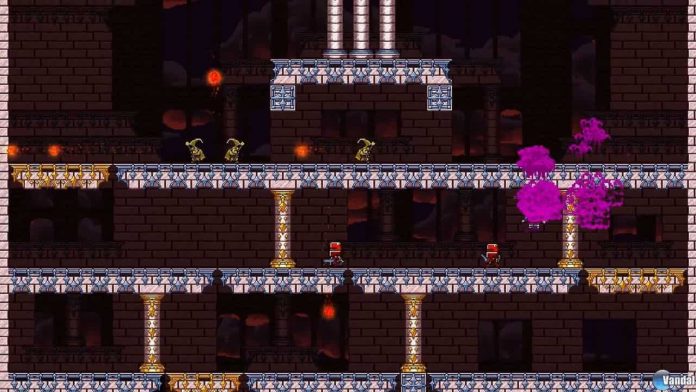 Right from the start Roving Rogue grabs you with intrigue.

Rather than the age-old tale of a hero’s hunt for his ultimate enemy, Roving Rogue looks at what said hero does after the final boss has been slain. With a simple old-fashioned gameplay style reminiscent of the likes of Yoshi’s Island (minus any eating and throwing of eggs, that is), it’s far from a perfect game, but does plenty right to keep us wanting to play.

Despite its intriguing start, the story of Roving Rogue quickly falls down. Playing as “Kurt the Righteous” having just defeated the boss, you travel back through the castle to end up where it all began: at level 1-1. The story is unravelled as you find collectibles – in the form of pieces of armour – littered throughout each level; every time you grab one of these, a new segment of the tale is revealed. The concept is great, ideally at least, because it gives you reason to keep hunting for the hidden collectibles, but in practical terms it’s a very small percentage of players who are willing to 100% complete the game, so a lot of people are going to miss out on chunks of the story.

The mechanics are very simple and easy to pick up within the first couple of minutes. A fun element of the game is Kurt’s ability to teleport short distances – it’s a tool that you’ll need to use in almost every level, and requires a degree of skill and quick thinking in order to avoid becoming a victim to any of the numerous traps and treacheries that litter the fortress. There are just over 40 levels to play through in Roving Rogue, each with its own distinct style. To begin with, the game feels rather short, as levels don’t take very long to get through. It doesn’t take long, however, for the intensity to be turned up and for levels to offer quite a challenge. That said, the game never feels impossible; even though you’ll undoubtedly die a lot in certain places, you’ll always be able to succeed through the tricky paths and multitude of enemies with a little perseverance.

Though the 16-bit art style of the game with its various pixellated environments might not be to everyone’s taste, it’s executed very well, with nice textures and plenty of added detail thrown around throughout the game. The retro feel is bound to be a big selling point to anyone who loves a slice of nostalgia, especially of arcade-style 2D side-scrollers. The music of Roving Rogue is fairly nice too; although a little repetitive at times, the tunes are catchy and help to set the atmosphere of each level well. Unfortunately, Roving Rogue lacks a certain je ne sais quoi that means it falls short of being an essential indie title. It’s an enjoyable game to play, but I found it couldn’t hold my interest for very long; there isn’t a great deal of depth to the story or gameplay to prolong your enjoyment, and once you have mastered the teleportation skill there isn’t really anything new to pick up as you play, making it quickly become repetitive. With no online play on offer, you’re restricted to a single-player experience, and while some love the opportunity for a short, quick and sweet game to go through, it’s certainly not for everyone.

In conclusion, Roving Rogue is a charming little side-scroller that succeeds in making you reminisce on the gaming days of old, but in a saturated indie market it fails to stand out and falls short of being a great game. There are some unique ideas present, such as the teleportation skill, but unfortunately these are not developed enough to really glue you to your Wii U pad. That being said, if there are any hardcore side-scroller fans out there, Roving Rogue may still fill a void, at least for a short while.

Roving Rogue is available on Nintendo Wii U.