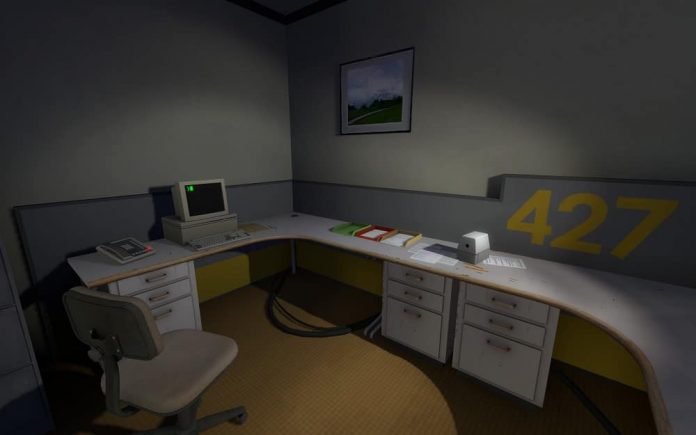 Stanley sits at his computer, just like every other day of his miserable life. He spends hours staring at the screen and pushing the buttons he is told to. But today is different. Today you are in control. Today you are Stanley.

When he receives no work, Stanley leaves his desk to find the office empty. No worries, his colleagues are probably just in the meeting room. So Stanley heads out to find them. Or does he? Maybe he’ll just stay in his room and hope they come back. Maybe he’ll go on an adventure to uncover the true meaning of his life. The decision is entirely up to you.

The Stanley Parable is unlike any game I’ve ever played. There are no puzzles. There are no enemies. You have only to move, listen, and occasionally click. And yet somehow it’s really enjoyable. The building may be abandoned, but you are not alone. Your companion is the beautiful, deeply British voice of Kevan Brighting. His narration is perfect for breaking the fourth wall (and in some cases just breaking down) to tell us what to do, and to scold us if we don’t do it. The narration completely makes the game. When you arrive at a set of two doors he says, “Stanley takes the door on his left.” This is a test of your freedom of choice; in fact, you don’t even have to go into that room. If you take the door on the left, the narrator carries on as normal. If you take the door on the right and continue ignoring him, he scoffs. “Stanley was so bad at following directions it’s amazing he wasn’t fired years ago.”

The plot is formed entirely around your choices. There are various paths to choose from: some are intense and force you to think, whilst others are downright trippy and the rest are simply hilarious. The monotonous corridors lure you into a false sense of boredom, so when something interesting happens it takes you completely by surprise.

There are 19 possible endings in the game. Most took me approximately 20 minutes to accomplish, yet somehow I racked up three hours of gameplay. Many of these endings can be achieved via multiple pathways. I won’t ruin too many, but my favourite was the broom closet ending, where if you ignored the narration and stood in the broom closet, the narrator would give up. On your third playthrough of broom closeting, you’d find the door had been boarded up, preventing your access. This is one of few games I’ve played that regularly had me amazed or in stitches. It’s a light-hearted, easy-going game with a few hidden surprises and guest appearances from other well-known games. However, there are some powerful messages layered beneath all that coding. Without delving too deep into the workings of the world, The Stanley Parable is a good metaphor for life. At each moment in time we have a choice, whether it be outlandish and crazy, or mundane and orderly. Mostly we follow the rules and do as we’re told, but we often wonder what would have happened if we hadn’t.

(If the philosophy gets too much for you, you can always make Stanley jump out of a window. That should end it all… shouldn’t it?)

The Stanley Parable blows the restrictions of the player’s world wide open and lets you replay Stanley’s life to discover the unknown. Once you finish one plot, you are taken back to the beginning to make another. Even the slightest change can cause a butterfly effect. Constantly starting again does become a little tedious, but it’s a short game, and one minor flaw is forgivable.

Overall The Stanley Parable is a thought provoking and hilarious game of consequence and intrigue. It plays with your mind, surprises you at every turn, and makes you want to play it over and over again. You may think repeatedly walking down corridors doesn’t sound like much fun, but you have never been more wrong.

The Stanley Parable is available on PC.