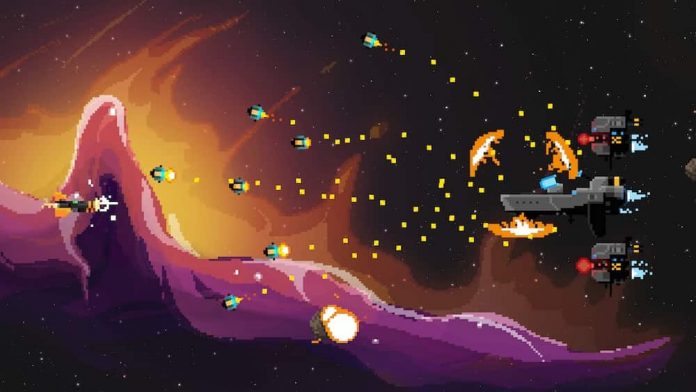 Not only that, but we are about to be spoiled by some incredible, huge releases. As a PC gamer, the platform has never been stronger; thanks to Steam’s open door policy, we have seen the popularity of smaller, budget titles sky-rocket to near-mainstream popularity. Steredenn enters the indie fray with 16-bit graphics and retro rogue-like stylings. Is it enough to set its own path among the big boys?

Steredenn is a classic shmup dressed in rogue-like clothes and 16-bit graphics. You start at the bottom of the pile in a little pixelated ship with a basic “blaster” gun for company and a slow, swirling metal soundtrack begins to slowly pound away in the background, almost predicting the oncoming slow winding trail of enemies getting ready to arrive and subsequently be destroyed. The waves are, initially, easy enough to dispatch, often bursting apart in a swirl of bright orange and crunchy explosions. Hopefully, if you’re lucky, they will have dropped a brand new weapon for you to pick up and use right before your first bossfight, which actually, occurs surprisingly quickly in the early stages here. This is pretty off-putting at first. A boss-fight at roughly 30 seconds into the game? Surely not? But yes, of course, this is a rogue-like and death can arrive swiftly, quickly, and without warning at the slightest miss-click. Arrogance and miss-timed manoeuvres are, as they are with most rogue-likes, punished with death and you will inevitably have to restart your run all over again. Thankfully, there is a thoughtful degree of procedural generation used in an interestingly unique way as the use of enemy placements and the weapons they wield shuffle around each time you play, meaning death not only gives you an opportunity to try again, but the stirring pot-pourri of enemy attack patterns keeps you guessing every time. It throws a brand new tactic at you each time you respawn and it really keeps things fresh. Here, death is not the end of the world: it’s enjoyable. And when you reach that boss fight that killed you last time? His tactics will be different too. They may attack in similar waves but the weapons they use and spread of bullets will have changed drastically.

Destroying your foes will provide you with a random chance to spawn a new weapon in their wake, which, due to the randomised nature of the challenges you face can either be a blessing or a curse. Often, you’ll be neck deep in shmup bullet hell and the opportunity to ditch your gunbots and swap them with a heavy laser may present itself and really, depending on your play style or current situation, might not always be a good thing. The latter is a cumbersome, slow to deploy godsend that really helps thin enemy ranks, while the former is a rather niche “pet” that remains in place manually shooting things for you. Swapping out your favourite weapon for a brand new unknown newcomer is either a thrilling dip of the toe into new territory or a bewildering parachute jump into murky failure. This is what the real draw of Steredenn is. Not the pretend retro facade, or the slightly silly heavy metal soundtrack or the space setting. It’s the constant build up of challenge, as it slowly inflates the screen with busy chaos, placing layers of challenge over already existing challenges, and generally filling the screen with projectiles like bullets and rockets and lasers. You barely have time to think as you’re ducking and weaving in and out of near death before a weapon pops out in front of you. Now the game expects a rapid tactical decision. And it better happen fast, because that item doesn’t stick around for long. This kind of on-the-fly instant tactical decision is what kept me playing Steredenn even after I started to tire of the blocky, pixelated visuals and slightly jarring music. The gameplay is solid, tried-and-true shmup chaos while finishing the experience off with some rather tightly honed rogue-like influences. It nails it, and it’s great fun. Weapons in Steredenn come under various different types. These are bullet type weapons, that shoot traditional shmup-style machine gun weapons. Energy weapons are more laser based weaponry, often cutting through several rows of enemies. Heavy weapons are, as the name suggests, slow to deploy but deal large amounts of damage. Contact weapons have a more physical, melee style presence and don’t use projectiles per sé and finally there are bots, which are essentially little robots that do all the killing for you. You can only wield two weapons at a time but this offers some great tactical switches in the middle of swarms of enemies. Become too overwhelmed by a group for your blaster to be able to cope? Then switch out for your heavy weapon and make some room. Maybe that huge rocket you’re firing now is missing the long, stringy waves of enemies that slink in and out of your sight lines? Then swap back to your blaster and clear them out of the way. The different weapon types offer you the opportunity to switch up your tactics mid-flow and gives you yet another split-second tactical decision to mull over while you’re sliding your way in and out of bullet chaos.

Between levels your life bar is restored and you’re given the choice of a handful of perks, Nuclear Throne style. You’ll need these upgrades as this game can get pretty brutal towards the middle, much like any rogue-like worth its salt does. Sadly though, the upgrades are often straight up statistical upgrades and don’t really offer anything unique or interesting like Vlambeer’s excellent Nuclear Throne. It would have been ideal to have visual add-ons for your ship that actually changed how you play rather than arbitrarily boosting some invisible stat counter. I would love to see an add-on that helps to funnel enemies into a tight spot or a non-violent “blast” that pushes enemies, and bullets, out of the way. As it stands though, expect to upgrade your percentages in a very dull, straightforward manner. The graphics, too, seem to do the job. It doesn’t win awards for originality. I mean, what’s a 16-bit retro graphic style going to do for you in a proverbial sea of pixels? What is it about sleek, clean and beautiful design that indie developers tend to shy away from? Luckily, the punchy, blocky explosions and swooping “boom” sound effects add real satisfaction to the game; there’s nothing quite as satisfying as equipping a huge blue laser and cutting away a huge mass of enemies. Explosions and pixels everywhere. Great stuff.

Overall, Steredenn is a unique twist on a long-lost arcade classic, the side-scrolling shmup of ye olden times. It throws in some creative use of procedural generation and bombastic (if slightly jarring) soundtrack and doesn’t shy away from offering the player repeat playthroughs. Even in Early Access, the game felt relatively complete, albeit missing one game mode but that didn’t matter. The rest presented was great fun, addicting, and kept the dying flame of shmups alive, if only for a little while.

Steredenn is available on PC.