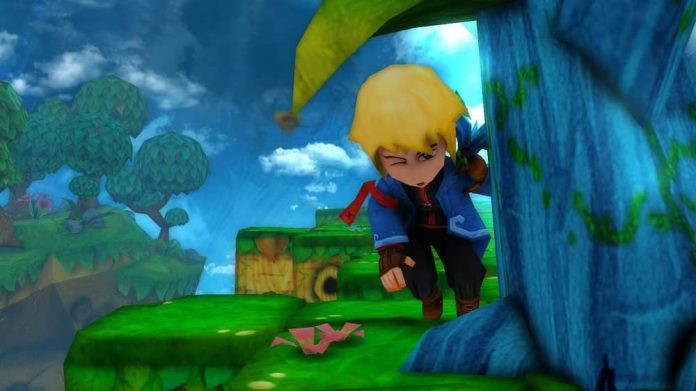 “KEEP RUNNING. KEEP RUNNING FOR CRYING OUT LOUD! OTHERWISE YOU’LL FALL! Oh, but don’t forget to replant blocks of earth and talk to as many trees as you can find.”

Almightree is a running based puzzle game where the player takes on the mantle of the “Last Dreamer”. A talking tree has given the dreamer the task of saving the world which is crumbling beneath his feet. In order to save it, he needs to run to the end of each level and find a tree to help replant the world. The world is comprised of several blocks which can be run on, jumped on and replanted to help the player solve puzzles. Around the dreamer though, the world is crumbling and he has very little time to complete each puzzle and reach the end of the level.

Controls are pretty simple: use the arrow keys to move around. There’s no need to worry about jumping as it is done automatically – as long as there is a block to jump on. You use the space key to replant blocks, and can handily hit the “U” key to go back in time back to the last block you placed, meaning that if you get stuck in a rut, you can go back briefly and try again. A handy little feature. Almightree does have a certain level of charm thanks to its plucky little dreamer, plus a pleasant soundtrack that’s fun but frantic to help ramp up the tension. Unfortunately, as far as the rest of it goes, I am not all that impressed. The game is built in the Unity Engine, but the graphics leave a lot to be desired. I can understand the sharp edged hair of the character, and the blocks being, well, blocky, but the rest of the game just looks blocky as well. It doesn’t look crisp or smooth, like it’s still being worked on or in mid-render. The controls are a little bit clumsy and unresponsive at times too; it’s easy to overdo movement and go further than you were wanting to. The character does not move in the direction you want him to automatically, but first has to turn around before running. The intro sequence is a bit iffy too as the soundtrack tends to interrupt any voiceover. The voiceovers could be pretty good, but thanks to the poor audio mix I couldn’t hear them all that well so had to rely on the subtitles more.

Then there is the story. I don’t think the plot of a world on the brink of destruction really works for a running game. Most running games work because it’s about how far you can go; not who does it in the quickest time. They don’t have an end to them, they just keep going. Almightree tries to do things differently by having a puzzle element thrown into the mix. It works a little bit, but as I am playing, I have no interest in why I’m trying to get to the end of each level, other than just to complete them. I would advise players not to play through the game on easy mode: it needs to have at least a medium difficulty level to create the jeopardy and urgency the game relies on. A higher difficulty allows the tension to build up rather nicely as the level progresses, whereas easy feels too laid back to be enjoyable. Almightree: The Last Dreamer is an interesting game. It has a nice level of charm thanks to its puzzle elements, soundtrack and main character. Unfortunately, the game is let down by its less than stellar graphics, clumsy controls and somewhat unnecessary story. If you enjoy a puzzle game, Almightree is worth checking out, but if you’re looking for more than a blocky brainteaser, you may be disappointed.

Almightree is available on PC.