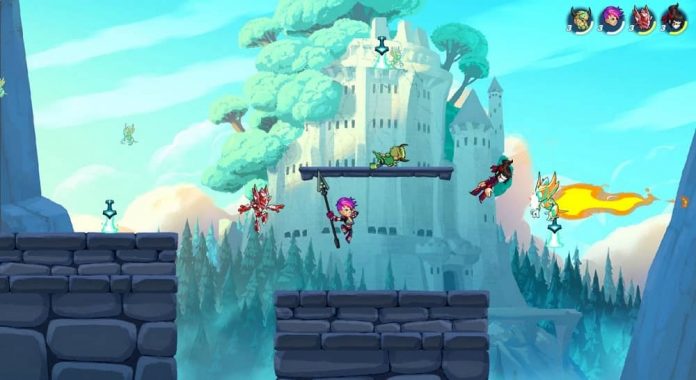 From Blue Mammoth Games, Brawlhalla is a 2D arena fighting game akin to the ever-popular Super Smash Bros. It’s chaotic, furious, and sometimes a little all over the place, but one thing’s for sure: it’s insanely addictive.

Although the game is currently in Early Access, there’s plenty of content to jump right in with. There are currently nine different stages to choose from, ranging from simple layouts for a basic brawl to more complex arenas with moving platforms and dangers, adding another level of chaos to the fight.

The game doesn’t have a tutorial as such, which may seem daunting to those new to the genre, but throwing yourself into a skirmish with AI is always the best way to learn any fighting game. After a few minutes of getting to grips with the simple and intuitive gamepad controls, it won’t be long until you’re bashing and pounding your opponents into submission. There’s over a dozen fighters to choose from, and each character has two of their own unique weapons available in the field when you pick up a weapon power-up. You can also customise each character with a variety of different colours and skin sets, although it’s worth noting that some skins are paid DLC. The skin sets on offer are very creative and varied, with many comical and serious skins, so that you’re bound to find something to suit your style. On top of this, you can even skin weapons to give your fighter an even more individual feel and look. Brawlhalla‘s 2D style of animation may not be to everyone’s taste, but personally I enjoy it; it’s a simple and clean cartoon style that’s easy on the eyes. The characters are well animated too: they may all be physically similar, but each has been given its own personal animation style and differing damage results.

The multiplayer functionality of the game is where Brawlhalla really shines. Even in Early Access, you’re given daily challenges rewarding you with gold when complete, and the option of ranked matches to battle it out and level up your characters. With its online community slowly but steadily growing, Brawlhalla is becoming increasingly promising to those who grow tired quickly of thrashing AI players, and prefer to go toe-to-toe with real players. Although I certainly enjoy this game, that’s not to say it’s without its flaws. For a start, the music is insanely repetitive and unfortunately not addictive like the gameplay – particularly the main menu music, which can drive you crazy in the space of about three minutes. The same can also be said for some of the music in some of the fighting stages, although it isn’t as much as of an issue, as you’re a bit too pre-occupied with the hectic nature of the game. That said, although the music in the game isn’t entirely up to scrub, it’s overshadowed by the addictive and enjoyable gameplay.

Brawlhalla is a game that shows a lot of promise, and as more features are added through its life in Early Access and its online community steadily grows, it’s going to be a serious competitor for Super Smash Bros. One thing’s for sure, if you’re an avid Super Smash Bros. fan looking for an alternative or something with similar gameplay, or even just looking for an easy pick-up-and-play game to absorb some of your time, you can’t go far wrong with purchasing Brawlhalla.

Brawlhalla is currently in Early Access and is available on PC.