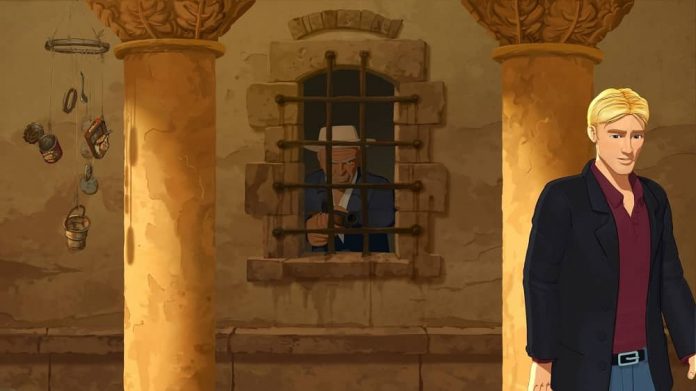 “As I picked myself up, all I could hear was the ceaseless drone of traffic. Life went on around me, but the explosion was to change my life, forever”.

These words, spoken by the blonde-haired American George Stobbart at the beginning of 1996’s Broken Sword will probably stick will me until the day I die.

A 2D point and click adventure game which has you unravelling a conspiracy surrounding the Knights Templar, it’s an absolute classic, and its rollercoaster plot taking inspiration from real historical events as well as its colourful characters, vibrant graphics, exceptional soundtrack and stellar voice acting made quite a big impact on me as a child. You could say that the explosion not only changed George’s life, but also mine.

After a 2D sequel in 1997 that was nearly as good as the original, and two further sequels in 2003 and 2006, entering the realms of 3D at the expense of some of the signature gameplay and charm that made the first two titles so captivating, the series laid dormant for some seven years, until the release of Broken Sword 5: The Serpent’s Curse in 2013. Previously only available on PC and Playstation Vita, Broken Sword 5: The Serpent’s Curse is now also finally available on PlayStation 4 and Xbox One, but whilst it successfully recaptures the spirit of the first two Broken Sword games, it still falls short of their greatness.

Eschewing the series’ staple subject of the Knights Templar for a fresh story concerning the Gnostic Gospels, Broken Sword 5: The Serpent’s Curse sees you once again taking control of the inquisitive George Stobbart and his journalist love interest Nico Collard as they seek to unravel the mystery behind the theft of La Maledicció, a Gnostic painting that is believed to hold a great evil. While the story is an enjoyable affair with plenty of twists and turns, it just doesn’t have the catch that made the first two games so enthralling, and also suffers a little due to an overabundance of fan-service. Fans of the series will undoubtedly enjoy seeing a few familiar faces throughout the adventure, but their inclusion feels a little forced, and newcomers will be left cold by the references and nods to prior titles that sometimes feel a little out of place. One area where Broken Sword 5: The Serpent’s Curse shines is its visuals. With its characters rendered in 3D before being flattened down to fit in with the 2D hand drawn environments, it looks sumptuous, and perfectly encapsulates the iconic visuals displayed by the first two games. The only thing that lets it down slightly is the poor lip syncing, but as this is only noticeable in a handful of scenes where the camera focusses in close to the characters for dramatic effect, it’s easily forgiven.

As a through-and-through point and click title, fans will be pleased to know that the game retains a PC-like control system on PlayStation 4 and Xbox One, with the left stick moving a pointer and the right stick panning the camera across the environment you’re in. Whilst it works beautifully, sometimes ordering George or Nico to traverse to the other side of a scene can a bore thanks to their pedestrian walking speed. Again, this isn’t a major issue, most environments are rather compact anyhow, but in some of the more sprawling environments it would have been nice for our cohorts to get a bit of a move on, especially considering the fate of the whole world may be at stake.

Where the real quality of a game like Broken Sword 5: The Serpent’s Curse lies though, is in its assortment of puzzles, and luckily, most of the puzzles on offer here are of a high standard. You’ll find yourself up against some interesting, logical, and taxing situations and conundrums during the game’s eight-or-so hour playing time, and the feeling you get upon resolving these is nothing less than cathartic. Unfortunately, the game does also have its share of puzzles so obscure that you’ll be tearing your hair out trying to get your head around them. Most of these occur during the second half of the game where events kick up a gear, which is understandable, but sometimes you’ll end up relying on trial and error, or even worse, a guide, in order to make progress. Overall, Broken Sword 5: The Serpent’s Curse is a good game that’s worthy of any point and click fan’s time. It never quite manages to reach the heady highs of Broken Sword 1 or 2, but it is undoubtedly better than the third and fourth entries in the series. With its familiar graphics and gameplay, Broken Sword fans will enjoy it in great measure, but may also be disappointed by its lack of a gripping storyline and some questionable puzzles. For those that have never played a Broken Sword game however, the game’s shift away from the Knights Templar means that this serves as a good introduction to the series, but they may be left puzzled by the overuse of many recurring characters (and a goat) that the game expects you to know.

Broken Sword: The Serpent’s Curse is available on PlayStation 4, Xbox One, PlayStation Vita and PC. We reviewed the Xbox One version. Buy now from Amazon.