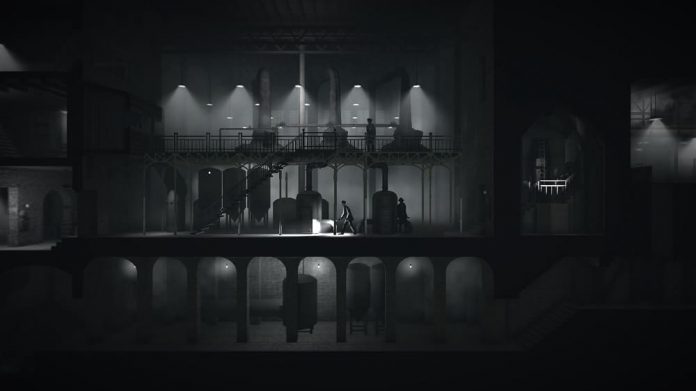 Aesthetically, Calvino Noir is the epitome of cool. It’s the lone figure standing in the shadows on a dirty street, the perfect glass of gin in a smoky jazz bar, the beautiful woman waiting for a train in a haze of fog.

However, this slow-paced stealth game, now out on PS4, PC and mobile devices, will have you feeling as cynical as its characters if you don’t have the patience.

In this mystery side-scroller by Calvino Noir Ltd, you initially play as leading man, Wilt. He’s appalled by what his city has become and is a master of the anti-hero monologue. He’s an eagle-eyed detective that can pick locks, find even the most miniscule of clues and take down guards. Wilt’s nothing new, but he fits into the noir genre perfectly. Across multiple levels, you play as three characters in total. Each one contributes a unique ability that will help you to uncover the city’s corruption, kick-start the revolution and fight for a better future.

Throughout the story, you interact with characters, collect items and find information to identify your objectives. You study guards’ movements and behaviours to survive and use the safety of the shadows in order to evade them.

The primary winning feature of Calvino Noir is that it looks absolutely stunning. It’s minimalist in design, but uses intuitive lighting effects that bring what could have been a dull black and white world to life. The discreet menu and title screen provides all the functionality that it needs to and gives centre stage to the game itself. At all times, an annoying but necessary aid in the form of a white marker travels a few paces in front of your character to help you complete the supposedly simple task of walking. However, due to the multi-layered scenes, you’ll often find yourself accidentally climbing a staircase or laboriously scaling a ladder instead of completing your intended task. This adds a lot of unneeded frustration and can cost you dearly during vital points in the game.

Other than this, the controls are relatively easy to use. You have control of a flashlight and can switch between characters using the one button, and another will interact with a variety of contextual actions when an icon appears. At certain points, you’ll be given the option to scroll through choices to select the correct action, but this can end up wasting you valuable time. It’s well worth familiarising yourself with this task early on to save face later on.

When you do die (and believe me, you will), your body disappears, and the world takes a good amount of time to reset and respawn you back to a checkpoint. This can become hideously frustrating, especially as many of the deaths are so unexpected.

It’s very difficult to judge how far the guards can see and what their exact capabilities are. There are no clear markers to indicate where their vision begins and ends, so players will need to be patient and take the time to observe their surroundings. A guard from the previous scene may have not noticed you hiding up the stairway, but the next one may spot you right away. Each situation is unique, and while that’s normally a great feature, the game offers little wiggle room in what you can do in order to succeed. You have to play within the exact parameters of each scene, otherwise that’s it. Game over. At one stage I spent five minutes working out how to get past a particularly diligent guard, only to be shot by another as soon as I opened the door to my escape. Now in hindsight, this was a cool surprise that added another interesting twist to the gameplay, but at the time I couldn’t bring myself to try again and had to take a break to go stress-eat. There are many moments when you can easily take down guards, only to find yourself being greeted by a shot to the head when you try the same tactic later on. These tense situations where one step could unravel minutes of waiting may be a nice nod to the game’s cynical narrative, but rapidly becomes tedious, rather than the thrilling and rewarding escape that it should be.

A nice little touch is how you can select your character’s answers in conversations, which gives you the choice to veer off into a witty monologue or just get down to business. It personalises gameplay and gives you the feeling that you have some say in how your character is viewed by the outside world.

If you’re looking to fully submerge yourself in a genre-rich game or put your sneaking abilities to the test, then Calvino Noir is a good choice. Aesthetically, it has great lighting mechanics that create a superb atmosphere. What’s more, it’s wildly different from the 3D first or third person games that we’ve become used to, and makes for a refreshing change. However, no amount of pretty can make up for the repetition of dying for the twentieth time, as well as the tedium that will eventually take hold and make you rage-quit. Calvino Noir is a gritty but challenging game that certainly won’t be for everyone.