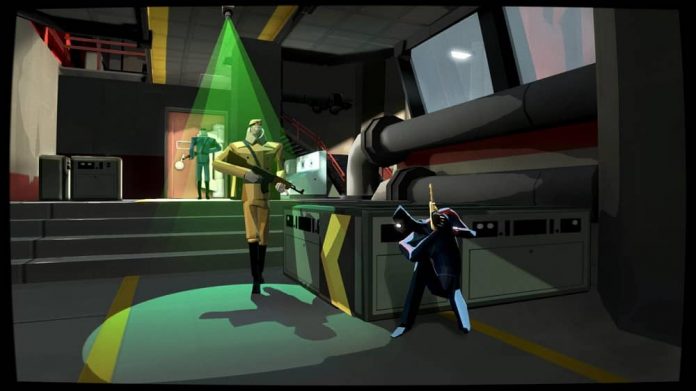 It’s the 1950s, it’s cold and there’s a war on. Missile threats from both the Soviet forces and American/NATO alliances jeopardise the “peaceful” balance of Earth, with only one organisation ready to step in and put a stop to the menace… C.O.U.N.T.E.R.

You play as a field agent for the organisation known only as C.O.U.N.T.E.R., a group of spies and other personnel with the sole purpose to prevent global catastrophe during an alternate version of the Cold War during the 1950s/60s. The objective of each mission is to gain intel and launch codes from both Russian and American bases without alerting either of your presence. As previously stated, each level is randomly generated and so offers plenty of replayability, although it does mean that there’s a chance that the next level could have a couple rooms that appear identical to others in the previous level. It’s a 2D game on a 3D field, with over-the-shoulder shooting sections which mixes the gameplay up just enough. The idea is to play the game like a spy, remaining unnoticed by guard patrols and cameras as you scour the base for enemy intelligence, technology and some extra “funding” for C.O.U.N.T.E.R. That isn’t as simple as it sounds in later levels; with increased patrols and security the player would be tempted to go in all-guns-blazing, which would be a mistake. When a guard or camera notices your presence, they signal for alarm which increases the Defcon level for that nation – Defcon’s a fun mechanic, I say, with a gun to my head and sweat dripping down my forehead. It shows the nation’s alert status and, as soon as it drops below one, nuclear missiles are fired. Game over. You’ve just ended the world because you’re a terrible spy, I hope you’re happy. I may be overreacting slightly, due to the fact that stealth games tend to become rage-quit material for the clumsy likes of myself.

You can purchase several different upgrades for your spy; there is a large armoury available to splurge your well-earned cash on as well as perks that last for a single mission. You begin with a standard pistol leading onto a silenced pistol, a favourite of mine, which will most likely get you through the entire game, but you can find blueprints in the bases you infiltrate which unlock a variety of guns to purchase. Some examples of weaponry are the “Atomiser Shotgun”, a powerful, very loud shotgun with a wide spread, and the “Treaty Violator”, a sticky bomb launcher for all your communist massacre needs – you know, standard spy equipment. The perks, labelled in the game as “formulas”, range from decreasing the Defcon of a nation by one to being able to run completely silently, all of them fairly handy to a varying degree. The aesthetics of CounterSpy are probably what had me hooked. It uses simple shapes, pasted with a bold colour palette, to create a really simple and yet satisfying art style. The propaganda in each base is stylised with a distinct feel of the 1950’s and it’s a simple yet pleasing addition to an already attractive background. Another thing Dynamighty got right was the casual humour they slipped into the levels;your coordinator is an overly stereotypical British spy leader, and the notes that add towards your overall cash, stating things about the base’s employees as well as over-exaggerating government secrets, are comically enjoyable.

I would happily recommend CounterSpy to anyone, regardless of their preferred game genres. The simple mechanics are welcoming to casual gamers, and the harder difficulty means that hardcore gamers can enjoy that struggle they seem to crave. Coupled with the fantastic visuals and high replayability factor, it’s got plenty to offer gamers of any calibre.