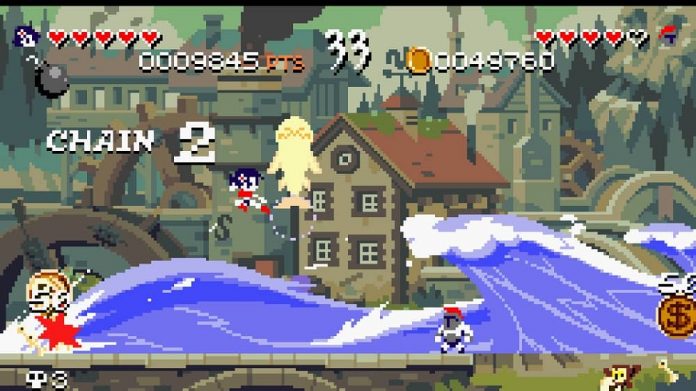 The diabolic and rather hip looking Wizard King has unleashed his monstrous creatures upon the land. It’s up the world’s greatest fighters – Lea, fiery wielder of the dreaded “Mach Punch” technique, and Leo, “The Mighty Mountain without a past”’ (hopefully no relation to Game of Thrones) – to lift the curse inflicted upon them, battle monsters, and bring the evil Wizard King to justice. Although you wouldn’t be blamed for thinking retro-styled indie games have become too numerous at this point, Curses ‘N Chaos is unarguably a delightfully good-looking game.

The 8-bit graphics have obviously had a great amount of care put into them; the player and enemy animations are seamless, the cutscenes beautiful, and each level backdrop is unique and picturesque. It’s a NES era styled game with a modern face lift, and does it as perfectly as anyone could want. You never have any trouble discerning your player sprite amongst the hordes of monsters that litter the screen, which is necessary as Curses ‘N Chaos shows absolutely no forgiveness in its gameplay. Like many games of the NES era, you better learn quickly and play like a professional or you’re not going to see past the first 10% of the game. Each level consists of 10 waves of enemies you must dispatch; ending with a boss battle after the final wave. Each wave lasts 60 seconds by default, but extends if the screen hasn’t been cleared, summoning the Grim Reaper himself to attack the player and make the wave that much more challenging. You begin each level with five hearts and three lives. Food and potions dropped by monsters or crafted beforehand restore varying amounts of health and with two available inventory slots at any one time, it is absolutely necessary to prioritise healing yourself efficiently while keeping back up items in case of emergencies.

A large display of different weapon drops adds to the complexity; you can set up stage traps, fire power weapons to kill heftier enemies, or hold onto rare spells to take back to the crafting station after the game. Unfortunately you can’t switch between two items immediately; a friendly owl will fly down and take a spare item away when pressed, and then fly down again and drop it back on the stage when requested. This can be a horrible nuisance during the later levels as you’re frantically trying to dodge a hundred things on screen, kill all the enemies before the timer runs out, and then wait for the item to be dropped and picked back up again before use. Before beginning each stage you can talk to the friendly alchemist and visit her shop with the money you’ve collected off monsters. Here you can buy food or weapons to take into the stage, or mix together different items in hopes of creating something better. The grimoire shows you which items can be combined, so don’t go mixing things blindly as you can end up with a load of useless junk.

Although Curses ‘N Chaos is a very addicting game that’s incredibly rewarding once beat, its difficulty cannot be stressed enough. Despite its fun, humorous style and peppy chiptune soundtrack, it is not a game for the casual player and requires a great deal of patience and skill to complete. The uppercut, mach punch, jumpkick, and normal attack must be mastered with the tenacity of a Shaolin Monk in order to proceed. Enemies that once seemed easy in earlier stages become gruellingly difficult when mixed with the attack patterns of new monsters. It’s a hard mix between dodging with your double jump and finding the perfect opportunity to quickly attack without getting hit. The default attack unfortunately locks you in place for a bit too, and since it’s weaker than all the other abilities it’s generally just a detriment. Curses ‘N Chaos is definitely worth your time; it’s a beautiful and challenging game that was obviously created with a lot of love and care, just make sure you’re ready to put your skills to the test as casual gamers may find the game too difficult to get any enjoyment out of.

Curses ‘N Chaos is available on PlayStation 4, PlayStation Vita and PC. We reviewed the PC version.