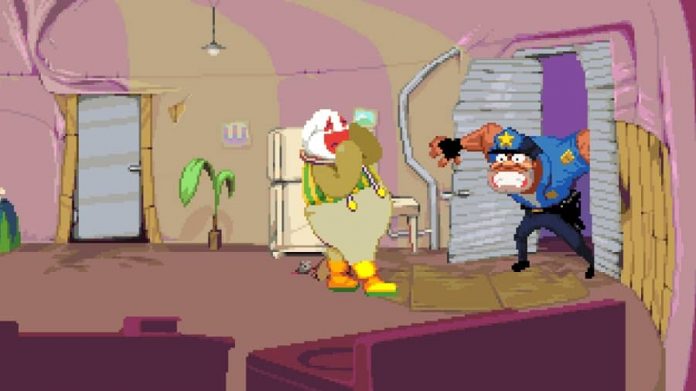 Something of a pixelated oddity, Dropsy is a point and click adventure that bases its gameplay around compassion and beauty in a world that has none, referring to the age-old phrase “you can’t judge a book by its cover”.

At first glance this game seems like the result of copious psychedelics and a mind fit for the loony bin, but it contains a surprising charm in the form of the – albeit ugly – loveable titular character; a circus clown who goes about his daily life helping people with their various problems, despite the fact that almost everyone hates him. The narrative is quite unclear from the outset but the player learns more about a fire that sets Dropsy’s circus tent ablaze as they progress through the game.

The controls are pretty basic and easy to get used to; as simple as moving the mouse and clicking. There’s also the addition of a menu at the top of the screen where the player can choose a map, an inventory and even a hug button. Also, Dropsy is followed around by his trusty dog which the player can switch to when there are patches of dirt that need uncovering. 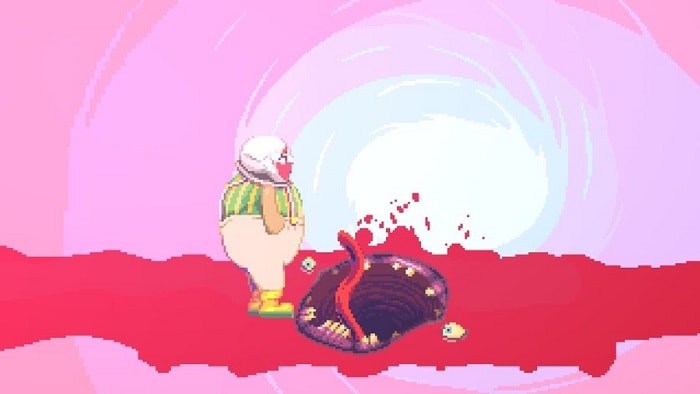 The art design is grotesque and in the style of a 1980’s arcade game but there’s something captivating about it. The sprites are brilliantly detailed and they continue to surprise the player with – at times – quite hideous characters with disproportionate appendages and menacing reactions when they see Dropsy. Also, whenever Dropsy goes to sleep, he is greeted by trippy and terrifying dream sequences that include giant teddy bears and toy soldiers, all accompanied with blood trickling from their eyes while circus music plays in the background. All of this made even creepier by the game’s retro design. The level design depicts a wide range of scenarios, from an urban cityscape, to a peaceful forest and even to a desert wasteland; all quite encapsulating and help immerse you in the dysfunctional world.

The game features a soundtrack that spans over 50 minutes and an assortment of tracks that change as the player changes location. The theatrical circus music and the touching piano pieces are the musical highlights, but the soundtrack sometimes falls short with some cheesy rock tracks that sound like polyphonic ringtones. Despite the few that fall flat, the majority add to the already immersive atmosphere and they fit to the locations almost perfectly. 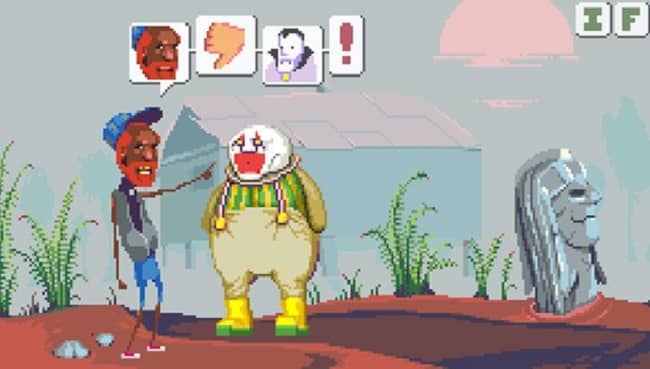 The gameplay could prove to be a make-or-break for some people. The game revolves mostly around running errands and solving puzzles in the seemingly ever-growing open world environment. The game has no speaking characters and is devoid of any text instructions, but instead humans and animals alike communicate through picture sequences shown above their heads in speech bubbles. This is inventive and clever as it makes puzzles a little more challenging and it’s also fun to decode the character’s messages. On the flipside, after you’ve been trying to solve the same puzzle for the last hour and you keep being greeted with the same picture sequence, it does create a slight annoyance, but when you do complete the puzzle, you’re rewarded with a hug by the person whom you helped. While that’s nice and all, the amount of effort you go to solve the puzzle makes the hug seem like an anti-climax. Despite this, the game is actually a sweet experience and it teaches people to look beneath the greasepaint, missing teeth and creepy demeanor.

Overall, Dropsy is funny and uplifting (for the most part) and it’s surprisingly challenging, while bringing an immersive experience and innovative gameplay. It does have some pitfalls like its hazy narrative and high frustration factor, but it’s great for those who enjoy an unorthodox adventure and for only £6.29 on Steam, it’s fairly cheap for what it has to offer.

Dropsy is available on PC.