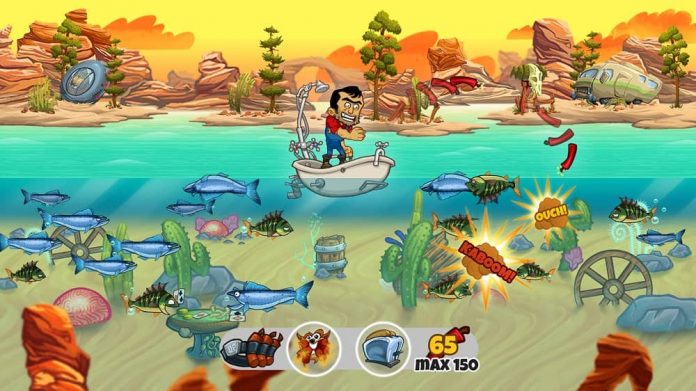 Fishing; it’s a boring sport, if you can call it that.

It’s a largely futile exercise that pits man against fish – a game that sees the hopeful angler dangling their rod over various bodies of water in the hope that something will nibble on their bait. Thanks to Dynamite Fishing: World Games however, I’ve discovered a new, more exciting method of fishing. And whilst in real life it’s actually illegal and certainly should not be attempted, in the confines of a video game it’s comedic fun, at least in small doses anyhow.

Dynamite Fishing: World Games has you rather unsurprisingly fishing with dynamite as its name would suggest, and it’s just as daft as that sounds. Starting out with just a redneck and a bath for a boat, the aim of the game is to sail to the right, blowing up fish with your dynamite and other special weapons as you go. To complicate matters, you may sometimes find your path obstructed by a stray barrel of TNT, requiring you to jump over it, and even more alarmingly, the fish may often decide to fight back, requiring you to take care to dodge their attacks. As if this wasn’t enough to contend with, the fact that you’re always in direct competition with another fisherman means you have to be speedy about your fishing activities or you may find your time cut short.

If you manage to survive your explosive fishing ordeal, at the end of each fishing bout your haul is tallied up, and the angler with the most fish killed is declared the victor. Upon victory, as well as the right to feel smug, you also earn stars depending on how much you beat your opponent by. With up to three stars to earn in each fishing bout, it will be in your interest to strive to achieve all three, as each star you obtain grants you a change at a pachinko type bonus wheel, which awards you various prizes such as weapons, upgrades and cash. Starting out in life as a mobile phone game, elements of its past still raise their head in this release, and are perhaps the game’s only real downsides.

Firstly, it’s a very repetitive game. That’s not to say it’s not enjoyable, because it genuinely is, but only in small doses as befits the mobile game genre. There are a huge number of events to complete across a wide range of locales, but the gameplay never really changes or evolves. From your very first fishing session to your last, you’ll be throwing sticks of dynamite with the X button, using special weapons with the square button when things get a bit hairy, and activating a devastating super attack with triangle when it becomes available. Your opponents get a bit more competent as you progress, providing you with a bit more of a challenge, but that’s about it.

The second tell that Dynamite Fishing: World Games started as a mobile game is both a positive and negative depending on your view of things: there are an obscene number of unlockables. You have unlockable anglers, unlockable boats, unlockable weapons, oh and let’s not forget the unlockable customisation items. On top of that, you can also spend cash earned during your fishing endeavours on upgrades for your anglers and boats in order to give them an edge over the competition. Whilst the sheer number of unlockables gives the game some much needed replayability and depth, it’s also quite off-putting, as unlocking all of them will require a serious amount of playing time. Want to play as the Grim Reaper? You will literally have to sell your soul to this game. It may be simple and repetitive, but at the measly price of just £3.99 Dynamite Fishing: World Games offers a lot of bang for your buck. Best played little but often, it has charming 2D graphics, a wealth of content should you take the time to unlock it, and more importantly, it’s a great deal of humorous fun. It’s mobile game roots may shoot through, but this is still a game worth installing on your PS4 if you want some quick, cheap thrills.