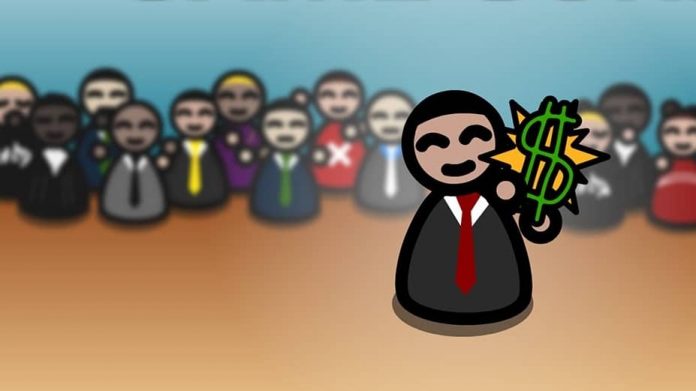 Making video games is not an easy task.

Many games these days can take years to make, cost millions of pounds and require a lot of people to work on them. It’s a big industry, but, for all the times you have played video games, have you ever considered giving it a go?

Game Corp DX is based on the online flash game of the same name (minus the DX) and challenges players with the task of building a video games company from the bottom up. Players start out with a small building and need to hire and train staff members and create game projects for them to work on. When the game is complete, they will then need to publish it, check out the reviews and get right on to the next project; providing they still have enough money to make them. As the game moves on, players can hire more staff members, upgrade and relocate their base of operations to places around the world, work on bigger projects, while also keeping the books balanced and win big at the annual awards.

Game Corp DX is a pretty simple game to play as it mostly involves moving the camera around with your mouse, and clicking on objects and the interactive menu to do stuff. The graphics are presented in a nice 2D style with no real shading or angles, making it easy on the eye. The soundtrack is rather nice and pleasant and kind of reminds me of the soundtrack from Theme Hospital. The game really does grab the attention of the player. It may be rather simple to look at and play, but there is an added level of depth in that you begin to panic when your money value is in the red. Creating the video games your company produces takes the form of a simple little selection of menus. Basically you just name the game, choose the genre, choose staff members with the best appropriate skills to produce the game and select from programs and resources to make the game. Then your workers will design and create it, followed by you publishing it, checking out the reviews, then hope it makes money. It’s a rather nice easy way of doing things, but you begin to care how well it does at the reviews stage, how much money it makes and if it wins big at the awards ceremonies.

While it is a nice simple game, I feel that some bits of it are rather random. Games work depending on whether or not you have the right people with the right skills working on a game, but when it comes to making money, it just feels random as to how much money it takes and how well it does at the review stage. One moment you could produce a game that would put Halo to shame, but then you could release something worse than E.T. As soon as you hit your stride and are able to know how to make good games, it gets rather easy. There are some in-game trophies and challenges to complete, but once you know what to do, it just feels like the challenge is gone. At best, Game Corp DX is a nice filler game. While it is rather addictive and you are able to get fully engrossed in the game, it does not offer much for long periods of gaming. It’s a game that is best played when you have some time to kill. It has some replay value but suffers from getting too easy once you get the knack of making games. It’s a nice little game but still has some issues in its current state; some of these are more technical such as not being in full screen mode when you first load it (something which you’ll need to change in the options menu). Despite the niggles though, it’s a pleasant way to pass a bit of time, and it’ll be worth seeing what updates are implemented before it’s out of Early Access.