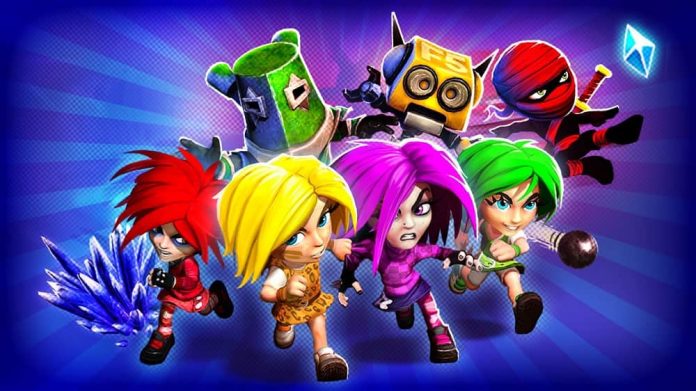 I remember playing The Great Giana Sisters on the Amiga as a wee nipper. It may have been a blatant rip off of Super Mario, but frankly, it was awesome: typical side-scrolling platform action, excellent graphics (for the early 1990’s, at least) and kick-ass girl heroes. I couldn’t have asked for more, really.

When Black Forest Games decided to revive the now elderly Giana Sisters in 2013 with Twisted Dreams, I was excited. Whilst it was a long cry from the retro classic, it wasn’t a bad little platformer. It had a nice art style and was fairly fun to play for an hour or two. Giana Sisters: Dream Runners however, is a whole different story.

Dream Runners started out as additional DLC for Twisted Dreams, but more content has been added to the title to beef it up enough to stand on its own two feet. (I use that term very loosely.) On paper, it’s a solid premise: a four-way multiplayer on-foot race where the goal is to speed ahead through varying environments, stilting your opponents as you go. You can collect power-ups and weapons to use against your opponents to stall their progress, though there’s no end goal; you just have to get a whole screen ahead of your rivals in order to be granted a win. Get three wins in the round, and victory is yours. Unfortunately, Giana Sisters: Dream Runners doesn’t do anything at all original. In fact, the premise of the game is exactly the same as tinyBuild’s SpeedRunners (available in Early Access since 2013), and judging by its “overwhelmingly positive” comments on Steam, it does it a whole lot better. Sure, Dream Runners may have a more detailed art style than the simplistic charm of tinyBuild’s offering – but in this case, graphical overhaul doesn’t mean a great deal.

The game has 12 different stages to play your way through. You can choose to play online or locally; local matches allow you to play with friends or have AI step in, so at least you have the option of playing solo if that’s your thing. The online is, not surprisingly, rather dead though; if you’re lucky you might get in a match after waiting a long while, so your best bets are couch co-op or AI. Actually, if you have some friends around, local co-op is probably the best way to enjoy the game – at least, for 10 minutes or so. The AI characters, even after being given the choice of setting their difficulty, are very cheap and somehow seemingly perform manoeuvres that your controller just can’t manage to do. Even with AI difficulty set to Easy, prepare to lose more than your fair share of matches, and you’ll probably give up playing long before you’ve put in enough time to become a master of the game. It’s hard to put my finger on exactly what makes Giana Sisters: Dream Runners so… so… well, so downright awful. It’s a combination of things, with very little in the way of redeeming features. Whilst the backdrops of the levels are fairly well-designed with a nice art style, the animations themselves leave a lot to be desired, and the characters are too similar-looking and too small to easily be able to keep track on your own sister. There’s an attempt to make the 12 stages feel very distinct from each other, but despite a few different obstacles thrown in here and there, they all feel very alike, and once you’ve played a few minutes of one level you’ve basically experienced everything the game has to offer. The music too is nothing more than a repetitive whine in your ears, looping over and over again.

The controls seem to work against you, and the layout of the levels only adds to that. The sisters have a “spin” attack, which you need to utilise to propel yourself upwards in some areas. Of course, this poses no difficulty to the AI characters, but to be able to travel at a similar speed requires you to tap the spin attack button at an inhuman rate. Other controls just feel clunky and awkward. You’ll also frequently get stuck on obstacles in the environment that your AI compadrés have absolutely no trouble passing through, with some levels having platforms that are literally impossible to jump to. Bugs are quite frequent too: when playing in local multiplayer, much to our amusement, the game decided to award victory to the person in last place rather than the winner. All in all, Giana Sisters: Dream Runners doesn’t have a whole lot going for it. Its only saving grace, for the trophy and achievement hunters amongst us, is that it’s fairly easy to 100%, but I’m not quite sure it’s worth the effort of bothering to play. There’s plenty of other games out there that offer the fun and frenetic multiplayer experience that Black Forest have tried to capture – and the majority of them do it much better. Do yourself a favour and play something else instead. Anything else.

Giana Sisters: Dream Runners is available on PlayStation 4, Xbox One and PC. We reviewed the Xbox One version.