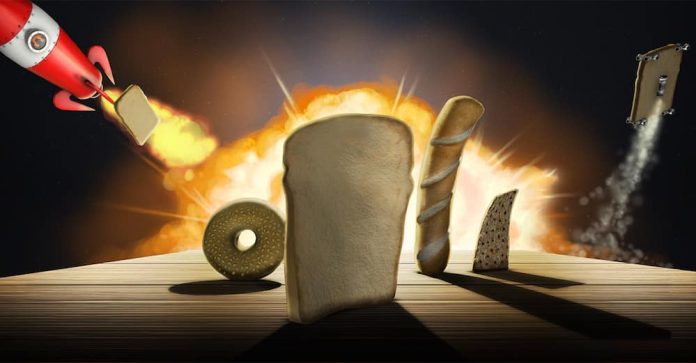 You may knead to sit down for this, bake a seat. Are you bready? Because I Am Bread is self-raising the bar for comedy indie games everywhere.

A must have for all you bun-loving gamers, it may get hard but at yeast getting through it is something to toast about! (Almost all puns taken from in-game or promotional materials, don’t hate me). Available on Steam, mobile devices and recently released on PlayStation 4 – it may sound like a one joke premise, but the best way to stop a joke game going stale? Make it actually fun to play too.

In 2013, for the annual Global Game Jam, Bossa Studios took a challenge – the aim of which was to create an entire video game in only 48 hours. After doing well in the event, the idea that was born from this project was further developed and polished by the small team over 48 more days, and the result was Surgeon Simulator 2013 – a charming, unique and hilariously challenging little game in which you attempt various medical operations using a control scheme about as simple to use as that of a military fighter jet. Well it seems that Bossa Studios have settled on their winning formula of “Seemingly simple task + Deliberately awkward controls = Hilarity” [see also: Octodad] because a similar approach has been taken with their most recent game, I Am Bread. In I Am Bread, you are… well, bread. In each level you control a sentient slice of delicious, nutritious wholemeal on a quest to become toast, and ideally get as tasty as possible along the way. Now depending on the kind of person you are, that summary either made you really want to play the game, or made you cynically roll your eyes like June Whitfield in the opening titles of Terry and June. Now while it’s true a lot of these games (that are basically built around a single “wacky” concept) tend to be shallow YouTube-bait, there is a surprising amount of substance here, and enough actual depth in both gameplay and story to keep me interested and having fun right up to the end; way past the point at which the central joke had worn off.

Toasting yourself may sound like a simple objective, but it becomes a lot more complicated if you’re only six inches tall with no arms or legs. Movement is controlled with the left analog stick, though using it on its own will cause you only to shuffle pathetically along a flat surface like the worlds worst breakdancer attempting the worm. For more advanced movement, each of the triggers and shoulder buttons correspond to a different corner of the slice; holding one down will stick that corner to a surface and allow you to rotate the bread freely around that pivot point. This allows you to climb walls, fling yourself between platforms and cartwheel between obstacles in your pursuit of hot things to crisp yourself on; as well as letting you pick up objects that could in some way assist you. It’s an incredibly fiddly exercise, made even more challenging when you work out that contact with the floor or any other dirty surfaces makes your ‘edibility meter’ drop: reach zero and you restart the level. If that weren’t bad enough, climbing between obstacles can get incredibly tense thanks to the inclusion of a “grip” gauge which constantly ticks down whenever you’re sticking to something (and now I feel weird because I want to make a comparison between Shadow of the Colossus – one of the greatest pieces of interactive art ever created – and a game in which you control a slice of wholemeal clinging desperately to a fridge door). It’s incredibly challenging but it never got to that level of controller-breaking frustration that other difficult games can so easily reach, maybe in part due to the genuinely delightful soundtrack that, while slightly repetitive, provided various catchy and jaunty tunes to fittingly accompany my doughy acrobatics. I also found that in the later levels, after you’ve become more accustom to the finger-crippling controls, the challenge is more about working out the correct methods of toasting yourself, as opposed to the platforming of earlier levels; which I found a nicely organic way of building the difficulty without making the jumping and climbing puzzles impossibly hard in the late game. It starts simple enough with toasters, stoves and irons; but soon you may have get creative – turning on electrical appliances or lighting matches to generate enough heat to turn yourself that crispy golden brown.

I Am Bread is described in its blurb as the prequel to Surgeon Simulator 2013, but those unfamiliar with Bossa Studio’s previous title shouldn’t be put off. The connection between the two games is minimal and only becomes apparent at the very end, only serving as a nice easter-egg for those who have played both. While many games with a premise as quirky as this would be happy enough to just let the humour of the gameplay steadily stagnate as it is played, I Am Bread includes clever touches of story and world-building that add an intriguing context to keep things fresh and interesting. We read, in the form of psychiatric notes between each level, the story of a man becoming increasingly paranoid that the apparent break-ins and daily violent trashing of his home are actually caused by slices of sentient bread. We follow how he tests his theory by placing the suspect loaf in a different room of the house each day, eventually leading to an explosive finale more exciting than that I’ve experienced from most action games this year. The story mode is a tad short, even accounting for the difficulty and amount of time it’ll take to complete each level, but a generous amount of fun alternate game modes are included to make up for lost content. “Bagel racing” is particularly enjoyable, where those who just enjoy smashing things can go on a baguette rampage, and a “zero-gravity mode” is thrown in for people who thought the controls in regular mode weren’t quite stupidly difficult enough. There are also bonus levels done as a crossover with Team Fortress 2 and Star Wars (Starch Wars), which are also fun, but lack that special something that you get within the context of the story campaign.

Well I’d better baguette-ing on to a conclusion, so to wrap up, I Am Bread gets a wholegrain-hearted recommendation – it’s definitely the upper crust of comedy action adventure games. Don’t be scared to give it a rye, if there was one thing to bake away from this review it’s that you’ll get your dough’s worth. You’ll at yeast get a laugh or two, or it’ll certainly rise to the challenge. To get the toast out of it, just get in the rye-t mindset and let some of the jokes focaccia off guard. Wheat a minute, there was something else… oh never mind, I’m waffling anyway.

Now you’re probably thinking I didn’t need to put quite so many bread puns in the final paragraph.

Well that’s just how I roll.

I Am Bread is available on PlayStation 4 and PC. We reviewed the PC version.