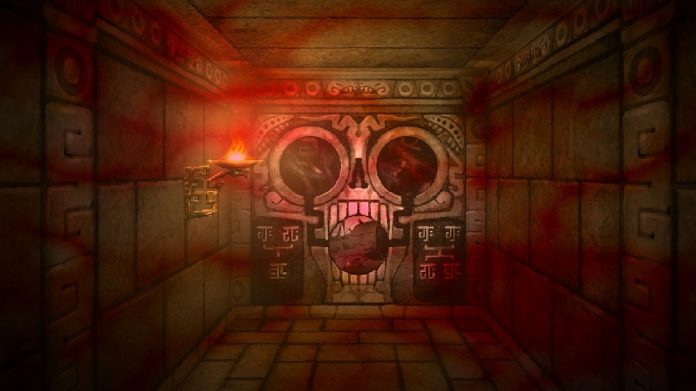 I Can’t Escape: Darkness, developed by Fancy Fish Games, has only one aim: to scare the hell out of you.

With its simple, randomly generated graphics and labyrinthine corridors, all you need to do is escape before the darkness takes hold. A spiritual successor to popular indie title I Can’t Escape, is this game worthy of your fear, or just horrifyingly bad?

To be brutally honest, it doesn’t feel like I Can’t Escape: Darkness has been given the full attention that it needs. Taking it at face value and stripping back all the problems, the game does achieve what it sets out to do, and that’s to unnerve the player. Having said that when you are sat in the darkness with a set of headphones plugged in, as is encouraged by the games menu, that’s not a magnificent feat. What should define it is how it goes about playing with your anxieties and what sets it apart from other titles of this genre, such as the classic Slenderman. I Can’t Escape: Darkness has a lot of things going for it, but unfortunately they are not pushed to its full potential.

“I Can’t Escape: Darkness has a lot of things going for it, but unfortunately they are not pushed to its full potential”

The control system does start off as a bit jarring. The step-by-step grid system restricts the flow of movement to a very slow pace, which at first was considered a massive hindrance to the smoothness of the gameplay. However as I ventured further into the maze and encountered more hostile forces, I started to appreciate how that restricted movement increased the panic factor when turning tail to run from an advancing foe. However, the biggest issue that comes with this horror thriller is the fundamental fact that it doesn’t really seem to have an understanding of its own lore. Though it would be foolish to put an emphasis on story with a game of this type and platform, having played through the labyrinth a good 15 times, I was never entirely sure what the main objective was. The obvious intent was of course, “escape the darkness” but how to do that and what signified completion of this task still remains a mystery. Numerous times my time in the maze was cut short by a tedious death by rats, an enchanted tangle of vines or a ghostly apparition, but a good third of my runs ended with me finding the very heart of the labyrinth and becoming what was described as a “‘watcher”.’ Whether this was the end of the game or just another eternal damnation, I can’t be ‘quite sure, but I also found that once you’ve found the heart once, the challenge in finding it a second time becomes less and less difficult. Though I tried to take alternate paths each time I delved into the game, the maze doesn’t seem to change, which may not be a significant fault in the design, as even on the fifteenth playthrough I was finding new tombs and new passages, that although didn’t lead to new revelations, helped me understand the vastness of the level design. I daresay that I didn’t manage to discover anything, but I’m sceptical that even if I had, it would have little effect on my overall opinion of the game.

As I descended to the lower levels, I was increasingly prompted by on-screen text stating I’d find the heart of the darkness in the lowest levels, which when considering the narrative works to increase your fears as rather than escaping the danger hidden around every corner, you are going deeper and deeper into whatever nightmare this is. However, not only did I fail to find any new threat the deeper I went, but the concept of reaching the bottom of the maze undermined one of the other gameplay mechanics that kept us on our toes: the pitfall traps. At any given moment, you could be thrown down into the next level by an unexpected trap in the floor and at first, this went a long way to correcting the recklessness of the way I was playing, taking more care when working out where to go next. But when I started to fully understand what the game was telling me to do, that anxiety of getting caught by another trap was eliminated, because the traps were now essentially shortcuts to the next level. So rather than actively avoiding them and searching for the stairs, as I would normally have done, I was actively searching for the traps as a quick way down, since there was little consequence, not even a health drop, using them. That being said, it does play with your anxieties and creates a sense of claustrophobia even though you are perfectly safe in your living room, bedroom or study. Many times did I turn a corner and see the ghostly apparition of a hostile spectre, only to turn tail and run as fast as the step-by-step movement controls would allow me. But again, it does feel like the game is missing a trick or two. Having discovered a new tomb in the labyrinth that did turn out to be a dead end, after a brief investigation of the coffins, the sound of a stone door closing caused panic, thinking that I was getting locked in and funnelled down another path that was designed to scare me even more. But when turning back to the entrance I’d come through, the door was still ajar. Where that hidden door had opened remained unknown, but it did make me think already having a labyrinth setting, having trip switches and traps, would have gone a long way to increasing the fear factor, and give the game a more distinguished personality. What it needs is to put more pressure on its players.

I Can’t Escape: The Darkness has a lot of the features that it needs, and it isn’t hindered by its pixelated graphic design because, to be perfectly honest, it doesn’t need to be any fancier than that. What it does need to do, is go back to the drawing board and refine its gameplay features because that is what is currently bringing this game down. Although at such a low price, you do get what you pay for, but the replay value is not high.

I Can’t Escape: Darkness is available on PC.