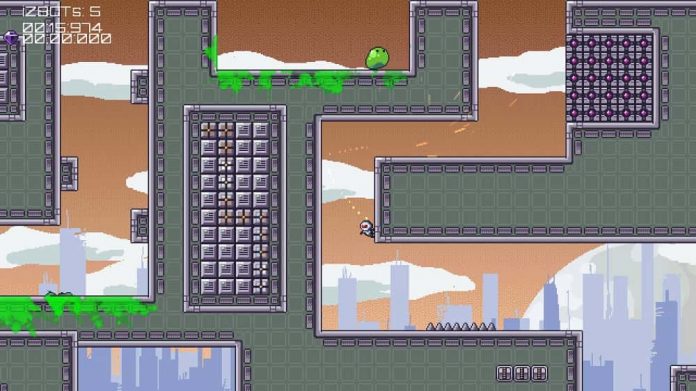 From Australian games developer Ruxar comes a high-speed, single-player indie platformer featuring the adventures and misadventures of the eponymous hero “iZBOT”. The idea behind the game is that, in the future, robots are under threat from some as-yet unnamed organic infestation, led by an irksome pest by the name of Bedlor. Our plucky protagonist, iZBOT, must defeat him.

Available on Steam, but containing full controller support, iZBOT appears to be, at first glance, a combination of the platform style of Nintendo’s original Mario, the white-knuckled, high-speed action of DoubleDutch Games’ Speedrunners and the whimsical graphics of ChuckleFish’s Starbound.

When first opening this game, I was a little dubious, considering I’ve played my fair share of platform-running games. However, I was pleasantly surprised at how enjoyable this game is. Though it has been described as “rage induced controller throwing”  in difficulty, I found the game to be quite pleasant and easy-going. Sure, there is the irksome aspect of being killed in one shot and having to start over, but the levels are so small, it doesn’t really matter. Even the harder levels, can be done in under 20 seconds with a bit of practice. The only thing is your failures are counted in the top corner; though slightly humourous, it could be disheartening to see how many times you’ve failed to beat the level. The music in the game is a variety of 8-bit chiptunes, featuring the talents of artists such as the Dutch musician RoccoW. The music itself is actually quite enjoyable and not unfriendly on the ears for those of us who grew up on games that had 8-bit music.

When it comes to playablility, I prefer using a keyboard over a controller, but that’s just my personal preference as my fingers are more used to keys than joysticks. The controls in the game, on both keyboard and gamepad, are extremely responsive, allowing you to perform beautifully timed jumps and double jumps to evade monsters and traps.

I was slightly surprised to find that at the end of every “chapter”, shall we say, there’s a boss fight. At first I struggled to see how a boss fight could fit in a simple jumping/running game and still be enjoyable, but Ruxar seem to have managed it. The one-hit-kill aspect of iZBOT makes boss fights frustrating, but also extremely satisfying when you finally beat them. One part of the game, just to add to the high-speed, wall-punching rage, is to also collect a single purple gem in every level called “Hardtogetium”. It’s not just a clever name. In most levels, the Hardtogetium is fairly easy to get and is on the way to the exit, but in some levels, you have to go off the beaten track and jump through all kind of deadly traps to satisfy the completionist in you. The gems aren’t any kind of currency, they’re just an extra objective – kind of like the cake pickups in ‘Splosion Man.

If I were to suggest one thing that could improve this game, I would add a multiplayer versus mode. Both (or all) players would race to beat each other on the game, perhaps having multiple Hardtogetium gems in the same spot – one for each player. A feature that allows users and players to design their own levels would perhaps also be a welcome addition to beef up the content that’s already there.

There are currently 63 levels in the game (20 per chapter, plus one boss fight each) but it seems likely that Ruxar will add more as time goes on. Any fan of fast action platformers will be sure to find something to like in iZBOT. If you’ve got the patience, it proves to be a very rewarding experience.

iZBOT is available on PC.