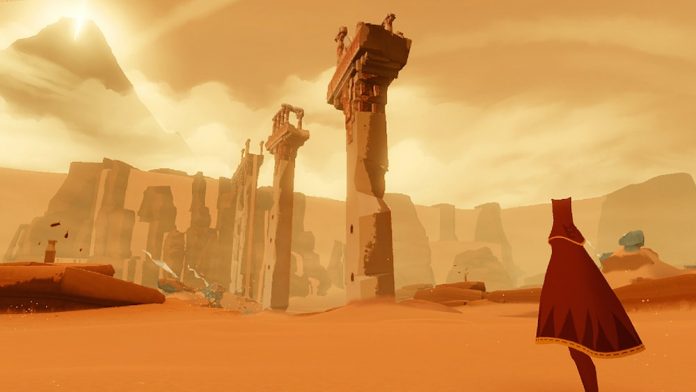 Despite its release three years ago on PlayStation 3 and recent remaster to PlayStation 4, Journey continues to immerse its players in a way that is unique to other games.

In fact, it would be an understatement to call it a game; this is modern art. Not the art you like because of its pretty patterns or the type that you like because it’s well painted. This is the type of art that makes you feel something.

The game doesn’t boast a mind boggling narrative packed with innovative and exciting gameplay; rather, it takes pride in its simplicity and beautiful art design. You play as a nameless traveller who wanders through the desert in reach of a shining mountain in the distance, equipped with a magical scarf that enables you to fly over puzzles and obstacles scattered throughout the land.

The gameplay itself is just one of the ways it exhibits its simplicity. The player moves the left analog stick to move, the right one to look around, the X button to jump and the circle button to emit a melodic bleep that activates doors and mechanisms.

With developers Thatgamecompany’s previous game Flower being prolific for its art style, they really stepped up their game in this latest effort. The art design is masterful in its entirety, inviting players into a middle-eastern inspired land of seemingly endless sand dunes and eerie derelict architecture, contrasted by warm colours and lively cloth creatures that aid you on your journey. Despite being set in the middle of the desert, the artists also flex their muscles by contrasting the initial appearance with the second half of the game; introducing drastic climate changes and swapping friendly cloth creatures for giant stone snakes. Another highlight to the game is its soundtrack. Austin Wintory perfects the experience with a Grammy-nominated score that doesn’t serve just as a backing track, but becomes a part of the gameplay; shifting tempos and volume based on the mood of the game to such perfection that –to this day- it still gives me shivers.

In this day and age, the one thing that can make people lose interest almost instantly when it comes to video games is whether it has multiplayer or not. Journey takes your average team-based multiplayer and turns it into something beautiful and unique. The online server allows a second traveller to accompany you on your journey, but they are completely anonymous and are only revealed after the game’s credits. While playing online, I found that people are a lot nicer when the only way you can communicate is through letting out odd noises. It also adds to the enigma that the game so delicately circulates through its mysterious cutscenes and silent narrative. One of the only complaints this game has experienced from countless players is its length. If you’re familiar with the controls, you could easily complete the game in just over an hour. Personally, I found that the game had so many commendable qualities that I could let the issue of the length slide. Yes, it would’ve been great if they had made it longer, but I think it’s short and sweet, and it might have dragged on without reason if they extended it to a six-hour playthrough. I mean, the concept is pretty simple so it didn’t need to last forever.

People can argue that this game has no replay value and to an extent I agree, but the rest of me feels that each playthrough is different. With secrets to find and an ever-changing companion in the multiplayer mode, I think there’s a lot more to this game than meets the eye. And if you don’t want to play it for any of that, play it for how good it looks, because… come on, it’s beautiful.

Overall, this game is just an absolute peach, and although it’s on the pricier side of independent games at £11.99 on PlayStation 4, it’s truly a staple in the gaming world.