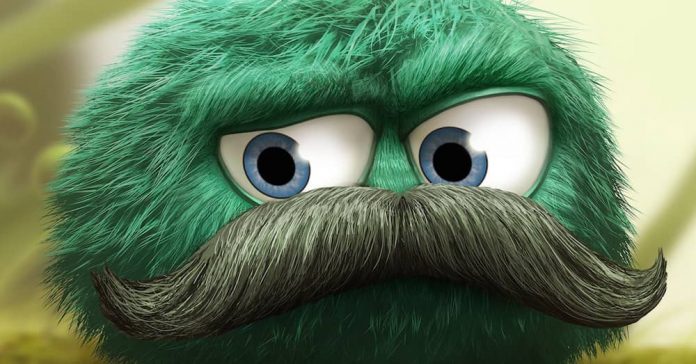 When you have a side-scrolling platformer where you play a little fuzzy ball with a moustache it doesn’t quite instil confidence… I mean, what’s attractive about that?

If someone asked me what Leo is I’d have to stare back at them, mouth slightly agape, while my eyes drift slowly apart. He’s a fuzzy blue ball with glorious facial hair that jumps, puffs up and slides along the ground. Describe that to someone and they’ll tell you to go and see a doctor immediately. So how does that make for a unique and interesting experience?

Leopold wakes one day to find his vast treasure missing. With an inkling as to which greedy relative took his gold, Leo starts his long and arduous journey to recover his fortune, conquering puzzles and exploring a variety of different lands across the sea. As a simple game with five acts and 20 levels – plus four bonus ones – it starts every few points with a black and white cutscene that tells us a little bit more of Leopold’s journey. What I originally thought to be a light-hearted little game with a fairly basic story – a “ho-ho, Leo’s lost his gold, better collect it in a Sonic-like way and try and get the high score” kind of thing – slowly grew darker as the game reached its conclusion, ending on a definitive but beautiful note.

It came as a genuine surprise to me how much I loved Leo’s Fortune. It took the traditional mechanics of a classic platformer and vamped it up to where these games should be in 2015. Twinned with unbelievably gorgeous visuals, a stunning score and a brilliant script, it’s extremely hard to find fault with it, even with its short play time (around four hours first play-through). It’s evident from the sheer amount of detail put into a game such as this that it was someone’s baby, from the textures in the environment to the carefully constructed level design. What I love more than anything is that 1337 & Senri LLC haven’t babied us during game-play. They’ve allowed a minute or so to get accustomed to the controls before starting the real fun; throwing jumps, switches and areas that require quick reactions at us whenever they please. Another brilliant feature is its frequency in checkpoints and fluidity in its loading. Having encountered a slight hiccup as mentioned below, this factor was appreciated more than ever when reloading a checkpoint a thousand times. Because of this “go-go-go” approach it keeps the pace very nicely for the most part, allowing me to complete it in one sitting.

Adding on to the last comment I will mention one thing that made me want to stamp my feet in frustration and it’s to do with pacing toward the end. In the final couple of levels, there were several points that the puzzle structure failed to keep that wonderful pace that made Leo’s Fortune so easy to enjoy. Most of which caused me to die 28-30 times and one of which was just plain tedious, that one was the most frustrating because it didn’t require the same effort as the others; you just had to jump over and over again. But it isn’t the end of the world. The script was cleverly written for such a short game, leading us in one direction until revealing the climax which throws us in another. Leo’s character is refined both in his personality and his voice acting, though whether his accent rubs me the wrong way or not, I don’t know. It wasn’t bothersome enough to hinder the enjoyment so I quickly overlooked this question in the back of my mind. In the cut-scenes we really get a sense of Leo’s personality, and as more of the story is revealed we start to put together the pieces of a puzzle he, himself, hasn’t yet completed.

Finally we’re faced with a conclusion, albeit predictable, which leaves us feeling all warm and fuzzy inside, ending the game with an “aww” rather than an “ugh”. Leo’s Fortune doesn’t bring anything new to the table, but what it does do is take the best of platformers and polish them like a pair of newly bought school shoes. It’s a small thing yet one plenty of developers overlook: before creating a new element, look at the old and make sure it really shines. Take note, all.