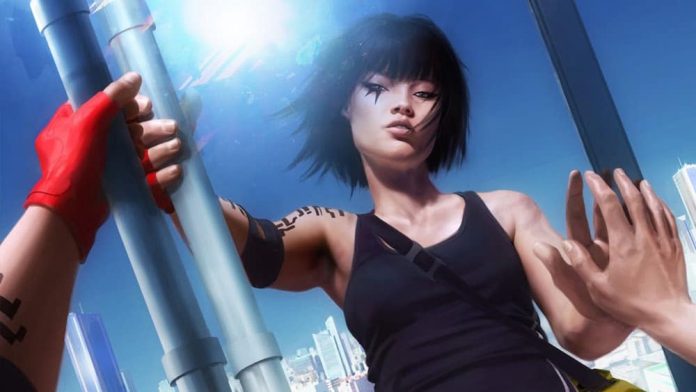 It’s actually a little hard to believe that Mirror’s Edge: Catalyst, a sequel long whispered about among fans of the franchise but never truly believed in, is now set to land on shelves in February of the coming year.

Yet nevertheless here it comes, vaulting over the heads of the other FPS giants like Call of Duty and DICE’s own Battlefield series with glee. As such, it’s the perfect opportunity to look back at the original breath of fresh air that was Mirror’s Edge, and see just why it gained such a cult following among the gaming community and what we have to look forward to in the sequel.

The focus of Mirror’s Edge is on a group of “Runners”, who serve as a sort of parkour courier service, giving Amazon’s drone deliveries a run for their money in a seemingly utopian crime-free metropolis. The player controls Faith, one such Runner who has a delivery interrupted with news that her sister, a police officer, is in deep trouble; it turns out that she has been framed for murder and now Faith must chase down leads and find answers within the city’s shadier underside to uncover the truth of the matter.

You may well be rolling your eyes by now, groaning “tell us a new one, mate” and you’d be right to do so. The storyline of Mirror’s Edge is the one slightly rusty cog lingering somewhere in the back of what is otherwise a very solid machine. It slips into cliché all too often, from the piece of paper reading only “Icarus” clasped tightly in the murder victim’s hand, to the classic betrayal at the end of the second act, to the vast spiderweb of conspiracies that is revealed at the end. It’s a tale we’ve heard again and again, and while not necessarily badly told, it’s certainly the most forgettable element in a game that is trying so hard to stand out and be memorable.

However, it’s arguably true that the mission of Mirror’s Edge was never to spin a tale to last the ages, but rather to provide you with a gaming experience quite unlike anything you’d had previously, and in this respect the game truly shines. The core mechanic, that of free-running through a dystopian environment, is absolutely exhilarating; you’ll find yourself launching off a ramp and grabbing a pole to swing yourself off of before bouncing from a wall and finding yourself on the skyscraper opposite with a delicate roll to finish. It’s a unique concept, and if your heart isn’t pounding by the time you land and dust yourself off, you’re made of strong stuff. Occasionally your momentum will be slowed by a trickier section where you really have to take time and consider your route to a specific destination, but even when you mess up and fall to your untimely demise, you never blame the game for it. It’s always yourself that you’re cursing as you plummet face-first onto the tarmac; yourself that you’re berating for not sliding out of reach of that sniper fast enough. The environment is so well-designed and thought out that you never once feel cheated, never feel that a death was unfairly doled out. You just weren’t quick enough on your feet. Or, that is, on your controller.

Sadly, the game also features gun-play elements which are very clunky by comparison. It just feels strange to glide gracefully from rooftop to rooftop, only to spot a suited goon, heft a sniper rifle to your shoulder, and awkwardly blow him away with it. It’s simply not a good fit for a game which relies on so smooth a pace elsewhere, or for a game trying to distance itself from more conventional first-person fare. Fortunately they give us hand-to-hand takedowns too, so that you aren’t forced to use firearms if you don’t wish to, although it steps up the difficulty quite substantially to play the game through with hands clean.

“The environment is so well designed; it all seems so grand and expansive”

The other gleaming badge on the coat of Mirror’s Edge is that it looks absolutely gorgeous. The city which serves as your playground is a cluster of tall ivory towers, spotted with a little colour here and there but otherwise blank and almost paper-like, acting as an accurate metaphor in itself for the fragile facade of bliss Faith’s state puts forward. But the minimal art design assists the gameplay too, with the interactive elements- poles to swing from, ramps to jump from- coloured a bright red to help with natural and intuitive pathfinding. Admittedly the game is very linear, with a goal you have to reach and a few slightly different paths to get there, but the environment is so well-designed, the playable area and the backdrop merging seamlessly, that it all seems so grand and expansive regardless of this. One of the major complaints often levelled at Mirror’s Edge is that it is too short, clocking in at only around six hours to beat the campaign. But in reality it is just as long as it needs to be; it doesn’t outstay its welcome and has time to show off all its best tricks before bowing out.

The best way to think of it is in the same basket as Valve’s Portal, which was even shorter in length. Each of these games was almost like a flex of the respective studio’s muscle, an opportunity to stretch out and get a feel for the possibilities of what they can do, what they can achieve. Valve went on, of course, to develop the crowning achievement that was Portal 2, building on everything that came before it and soaring above everyone’s expectations. It’s a lot to ask, but for fans of Mirror’s Edge, we kneel down and pray every night that Catalyst will do the same.