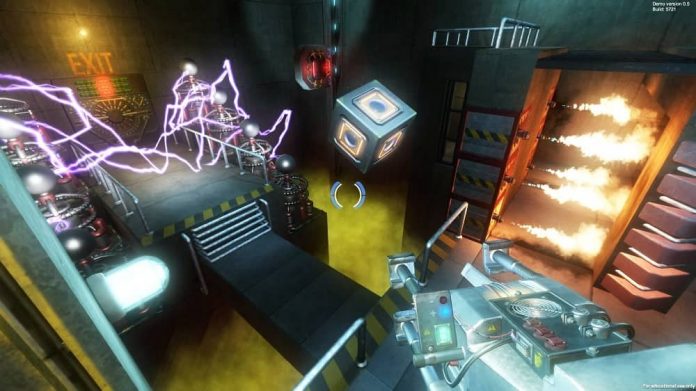 Developed by Guru Games, a small independent game developer in Sweden, Magnetic: Cage Closed is a first person puzzle game, not too dissimilar from the ever-loved Portal series.

You take on the role of Prisoner XE-47623 who has committed a crime bad enough to be on Death Row. Strapped to a gurney, you’re wheeled off to “Facility 7” and left in the care of the mysterious William Keene, who serves as the warden. The Warden gives you two options: live out the rest of your sentence in your tiny cell, or push yourself to the limit and complete each task given to you in the hope that your criminal record gets wiped clean. Clearly, you choose the latter.

Although you’re equipped with a different weapon and following a different storyline, Magnetic: Cage Closed bears too much of a resemblance to the Portal series to really be a new take on the “unusual and quirky” puzzle solving genre. Not to say that each puzzle doesn’t have its own difficulty: you’ll spend quite a few minutes just standing trying to figure out how it’s done. However, it’s all been seen before, and doesn’t feel “fresh”. The Warden’s threat of filling the room with chlorine gas cut it slightly too close to the neurotoxin that GLaDOS was partial to. The characters and dialogue really let Magnetic: Cage Closed down. William Keene is a vital part to the storyline, yet his evil characteristics feel too forced; I can’t help but compare him to GLaDOS in Portal 1 and 2. We can understand that GLaDOS is a corrupt robot, but Keene is just doing it for fun, yet it still doesn’t seem to fit. Prisoner XE-47623 is put through her trials and doesn’t say a word except for the occasional breathing sounds and screams of pain when standing too close to jets of fire. There’s little to connect to the character with; although the puzzles are the meat of the game, a little character development and personality wouldn’t have gone amiss.

Thankfully, the simple and easy to grasp control system of the game made for smooth gameplay. It didn’t stress the hands as well as the mind, which is perfect for a game where you have to concentrate to solve the unusual puzzles.

Very unusual for a video game, Magnetic: Cage Closed lacks a music soundtrack. Surprisingly, it actually pulls the game together, leaving you to focus on the puzzle itself without distracting you from the task at hand. The sounds of the environment around you make the situation very immersive. The only downside of the soundtrack is the main menu, which is very noisy and disruptive. It doesn’t fit with the storyline or atmosphere to the game. If you haven’t played the Portal series before, then Magnetic: Cage Closed is a decent game to get into the genre, but if you’re looking for something new, it seems that you should really look somewhere else.

Magnetic: Cage Closed is available on Xbox One and PC. We reviewed the Xbox One version.