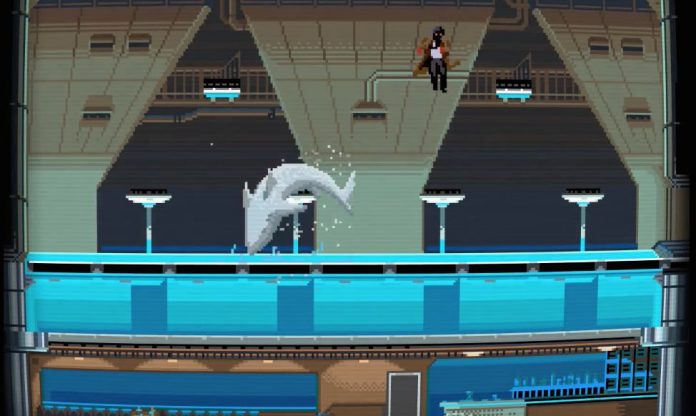 You know, I’ve been gaming for longer than I could spell my own name but there are two genres which I could never seem to gain any skill in: stealth and platformers. Why I agreed to review the stealth-platformer hybrid Master Spy is beyond me. This is how much I care for you dear readers; I bleed for you. Metaphorically.

Master Spy places you in the shoes of the titular spy. Armed with only a trench coat that turns you invisible and a freakishly good jumping ability, you set off on a globe-hopping tale of corporate espionage, deadly assassins, fatal laser traps, and an encounter with a really peeved shark.

Playing Master Spy is like looking at gaming history. If you told me this came out for the Sega Mega Drive I’d believe you. I’d then ask, how did you get in my house and why are you oiled up like that? The basic mechanics are as simple as they get. Left and right arrow keys to move, up to jump, down to activate your stealth trench coat. Your job is to grab the keycards and get to the next area, keeping an eye out for any secret levels on the way. When you’re invisible, you move slower and the guards and cameras can’t see you; get caught and it’s back to the last check point. As you progress, things get more and more complex. Guards start patrolling, dogs can see through your cloak, motion detectors scan for you, laser traps will fry you on contact. Eventually the game transforms into more of a puzzle game where timing is essential. You need to start a run at the precise moment that you can traverse its many hazards and figuring that out is half the game. This is also where I started getting caught. A lot. I played on “Novice” mode. Sorry did I say novice? I mean pussy mode. Turbogun make no secret of how Master Spy should be played; novice mode is considered to be where you train “with the aid of checkpoints”.  Listen, pal. I’ve still not rescued Peach from the first castle in Super Mario Bros.; I’ve actually heard rumors she might be in a different castle. Making your “limited-visibility Blind Master mode” an unlockable is very optimistic of you.

The first thing players are likely to notice about Master Spy is how 80s/early-90s it is. The graphics, the style, the music; it’s even got a CRT monitor like border and pressing T will produce some good ole fashion static for no apparent reason. The graphical style can best be described as Sega classic Revenge of Shinobi meets Total Recall (Schwarzenegger, not Farrell) with its blocky, angular sci-fi tech. Pixel art is starting to lose its appeal with many due to the surge of games using it recently, but I personally think it’s the perfect choice in this situation. If you’re going to make a Sega Mega Drive style game, featuring early 90s-style sci-fi, then pixel art makes perfect sense. I’ll also give praise to the soundtrack too. It fits the tone of the Master Spy perfectly and helps to put you into that trance like Hotline Miami did to master its fiendishly difficult levels.

Judging Master Spy was always going to be difficult. It’s a niche game aimed at the competitive crowd; namely those self-hating mentalists who do a fists only speed-run at Dark Souls for the lulz. Even just looking at the trailer you know it’s going to produce some incredible speed runs. But for the average gamer there’s not a huge amount to recommend really. It’s got great graphical style and soundtrack, but gameplay wise it’s basic and not really a stealth game. It’s all about the timing and precision. If you’re not a die hard platformer fan you’ll probably give it a few hours and that’s it. I can’t help but compare it to Gunpoint, which had a similar formula but much more depth. In conclusion, Master Spy is a bit of a Marmite game.

Master Spy is available on PC.