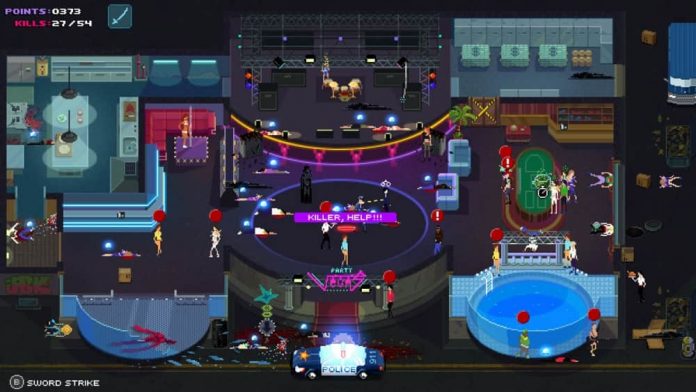 The party is in full swing next door and the drone of those infernal speakers has shaken you awake for the last time.

Your neighbours have pushed you too far this time; the only option is to set off on a party-induced killing spree across America in search of some peace and quiet. Developed by Pinokl Games and published by tinyBuild, Party Hard is a quirky stealth-based puzzle game that is lovely to look at but at times quite frustrating in spite of its colourful gameplay.

The premise is interesting and the story is told through cut scenes that play between each level. The quality of the voice acting leaves something to be desired and while the developers claim on their Steam page that this is “a (not) serious story” it would be nice if it were told convincingly. The tone set by the dialogue is ridiculous and makes you unsure whether it’s taking itself seriously or not and comes across as a bit clumsy. The art, however, is exceptional. Minimal and subdued, it uses large blocks of colour to create a striking aesthetic that breathes life into the plot and keeps you engaged during the awkward sections of dialogue.

When you’ve finished drooling over the game’s well-designed pixel art you will find that the gameplay, while simple, is actually a good bit of fun. Each stage has level-specific traps that you can use to incapacitate or kill your targets: bears, wooden watchtowers… and a sharknado. Yes, a tornado full of sharks.

The goal of Party Hard is to kill without being found out. It can seem overwhelming when you’re first presented with a crowd of 60 party people to take down but it doesn’t take long to learn that patience is paramount. It’s a great feeling whittling down the number of party goers one at a time, but there are so many of them that it can get a bit annoying when you have to start the level over for the third time and you’re faced with the arduous task of killing every one of them again. Picking off stragglers and manipulating the crowd is a crucial part of the game in order to avoid getting caught; bodies of the unconscious or dead can be hidden in manholes or dumpsters to stop the crowd panicking. People can be driven from the more populated areas by dancing next to them but you must do so carefully. Bouncers prowl the crowds and will knock you out if they catch you; attacking them from behind or luring them into traps is the only way to deal with these brutes.

If spotted in close proximity to a dead body at any time during a level, a civilian will run to the nearest phone and the police will be called. The boys in blue will enter the map and doggedly pursue you across the stage. To evade them you can climb through windows or enter passages that transport you to different areas of the level, but after every use these escapes will be boarded up meaning if you decide to get frisky with that knife you had better be ready to clutch it out and pray they don’t catch you. To add to the carnage, small briefcases are peppered throughout the levels holding items such as swords, bombs and smoke grenades. These can be used to incapacitate, distract or kill large groups quickly and are a welcome change to the simple stab and run mechanics. Now all of this sounds great – and it really is entertaining, but this is a game that relies heavily on a few simple mechanics: stabbing people, using traps and escaping from the police. As a result of this repetition, it does not hold up over an extended period of play. The traps, aside from the stage specific ones, are pretty much the same every time with little deviation. The placement of them may change between stages, but at the end of the day it boils down to a lack of variety that the “random variations” of each level do little to balm. In fact, some of the later stages are just re-skinned versions of earlier ones.

Party Hard is a wacky and ridiculous experience that doesn’t take itself too seriously, but like the soundtrack, the game is entertaining initially, but the longer you play the more you realise it’s looping on itself with only slight variations thrown into the pot every now and then. Anyone expecting more than a lively tune and some straightforward stealth puzzling will likely come away disappointed from what could have been a promising concept.

Party Hard is available on PC.