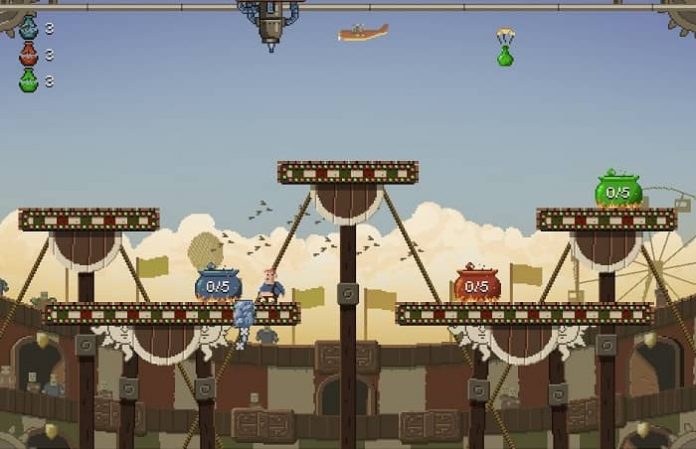 With his father as his only friend, all he longs for in life is a bit of wonder; a bit of excitement to help break the tedium of helping out on the farm. When the circus rolls by one day he is overjoyed: finally, for a brief moment he can feel a sense of joy in life. Ushered into a small cage by the circus’ director however, it soon becomes apparent to Willy that he’s let himself in for way more excitement than he bargained for…

And so begins Penarium, a challenging platform game that has you controlling Willy as he is effectively tested and tortured by a rather deranged director. Your task is simple: complete the director’s commands whilst avoiding a smorgasbord of projectiles, enemies and traps. Sometimes you may have to collect barrels, other times you may have to pop balloons in a certain order, but one thing will always remain constant: you’re never safe doing so.

For a short and fairly rotund young chap, Willy is surprisingly nimble. He responds to your controls with utmost responsiveness and has the uncanny ability to double jump. It’s a good job though considering the gauntlet’s he’s up against. Homing rockets, scrolling lasers and pesky barrel-stealing birds are merely the tip of the iceberg when it comes to the things that the director throws at you, and you’ll need to learn to deal with each obstacle effectively if you’re going to survive. 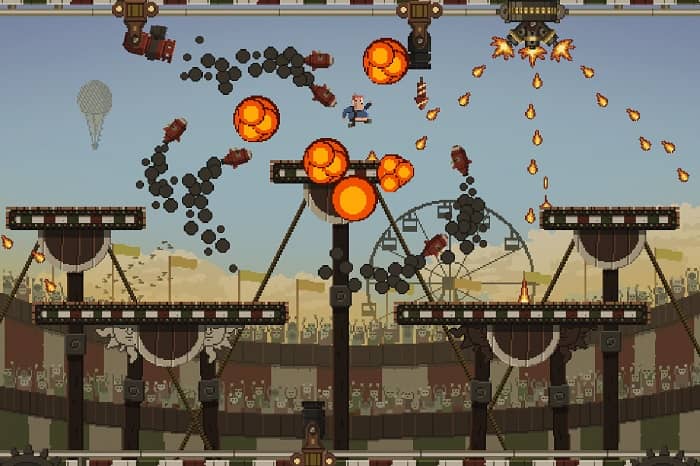 Campaign mode has you facing increasingly difficult challenges across three environments, and although most levels have set hurdles for you to overcome, there’s always an element of randomness that means you’re never able to rest on your laurels should you die and have to restart the level again. Oh, and you will die. You will die again and again and again until you emerge victorious, no doubt with the air turned blue by the cavalcade of expletives that you expended to get there. In fact, the unforgiving difficulty is a double edged sword for Penarium. For the most part, the difficulty works to its advantage – the addictive urge to have that “one last go” to complete a level is real here, as you always know you can do it, eventually. Sometimes though, it can just feel a bit unfair. Getting killed by a worm pretty much spawning on you when you’ve collected 29 of 30 barrels is truly infuriating, especially when you’ve got to start back at number one.

When you complete the campaign, or more likely, need a rest from its tortuous difficulty, you’ll also find that each of the three locations available can also be played in arcade mode. Tasking you to simply collect as many barrels you can until you meet a grisly demise, arcade mode also sets itself apart from the campaign mode by allowing you to collect coins which spew from barrels when you collect them. With a shop full of cards that grant you increased abilities and bonuses to purchase, you’ll be finding yourself spending a fair bit of time in arcade mode in order to grab the loot and also unlock quite a few trophies or achievements along the way. It’s actually a shame that the cards can’t be used in campaign mode, as they offer a nice variety of effects and introduce a little variety to the gameplay.

If you have some friends in the same room and they want in on the action, there are also a couple of local multiplayer modes too, although they’re both very limited. Versus mode has you and up to three chums battling it out to press buttons whilst avoiding a myriad of traps. You can jump on your opponents’ heads to stun them in order to give yourself a momentary advantage, but the undignified pile up that usually occurs at the button frequently turns this mode into a confusing mess. The cooperative mode on the other hand is immeasurably more enjoyable. With each player assigned a colour, they all have to stand on their correspondingly coloured button in unison while avoiding death. Its chaotic and challenging fun that will require a great deal of coordination by everyone, but it will also result in a hail of laughter.

Penarium isn’t a game for everyone – its pixelated graphics and cruel difficulty will prove to be divisive to the general consumer – but for those that are charmed by the visual style or enjoy a good challenge it’s a mighty fine game. It’s simple and repetitive, sure, but it’s also hugely enjoyable and grossly addictive. If you have time to play with just one Willy this year, give Penarium a try. It may just float your boat!

Penarium is available on PlayStation 4, Xbox One and PC. We reviewed the Xbox One version.