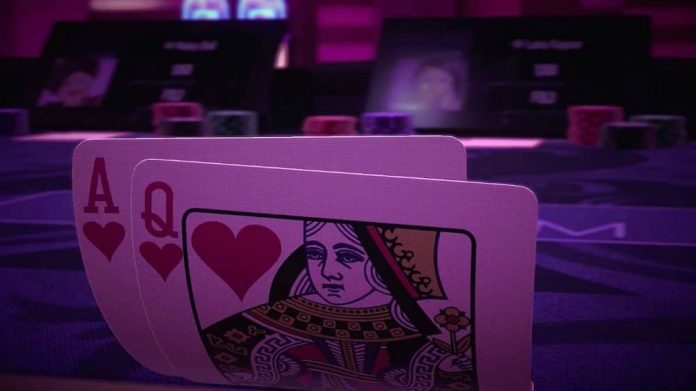 Poker is a unique game. It often plays out like a game of secrets and your visual appearance in game is just as important as the hands you play. How cool and calm you are (or not) can often turn the tide of a hand and bluffing your way to a sweet payout always feels great.

So far, video games haven’t really been able to come close to the real thing, mainly playing a video game about an already ages-old card game sounds about as exciting as a soft fart amidst a swift breeze, especially when you consider the sheer ear-bleeding velocity of some modern games, but also because that all-important human factor is so impossible to recreate through our favourite medium. Facial animations need to be spot on, human behaviour needs to be fully replicated, and the ebbing tide of bluffing versus real hands is so hard to code into AI that it’s no surprise there’s been no real break out success in poker games.

Unfortunately, Pure Hold’em by VooFoo Studios is no different.

First, let’s start off with the good. So, the visuals? They’re pretty nice. The tables are sleek, the cards bend and curve realistically, and the table cloth fabrics look beautiful, and choosing the luxury deck of cards means you can even see the reflective gold trim around the outside of the cards. It’s pretty well presented, and tables are often accompanied by some pretty jazz tunes, which really sound quite cheesy but thankfully, I’m a big fan of cheese. There is an informative tutorial to introduce you to the basics of the game which, if you’re an expert you won’t need but for those who’ve never played before it’s a really well put together introduction to the game itself. The hands of poker themselves can either be played offline with bots, with varying tables upping the ante in difficulty each time, or you can take your skills online against others. Each game will move along at a relatively brisk pace, probably as brisk as it gets with poker, as cards are dealt out quickly and smoothly with little time for thrills or spills. 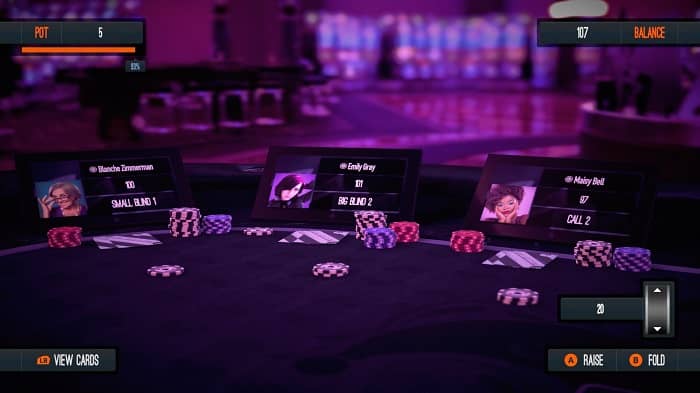 Sadly, that’s really about it in terms of praise. The game looks relatively decent and the swift pace of the game ensures your attention-craving mind is kept in check, but it’s everything else around the game that holds it back. First of all, cards are dealt out like machine gun bullets from an invisible hand, floating above the table mysteriously, and it just feels bizarre. The cards are spit out mechanically across the table to your opponents, who for some strange reason are literally just computer screens. They aren’t even fully modelled human opponents. You’re playing poker against names on little tablet screens. If you thought you’d be able to read your opponents’ body language for any tells or signs of a lie, think again. It would have been fine if there were players sat around the desk but weren’t fully animated – truly anything is better than this – but computer screens? Really?

The lack of any present humans at your table is just strange and it often feels like you’ve been forced to play poker by some malevolent machine, pitted against brutal, faceless androids with no emotions. I wish that was the case; that SHODAN had captured you one final time for a deadly game of poker that lead you to question your sanity, but it’s not. This is just how the game is. A cold, lonely game of mediocre poker against small, shiny screens. 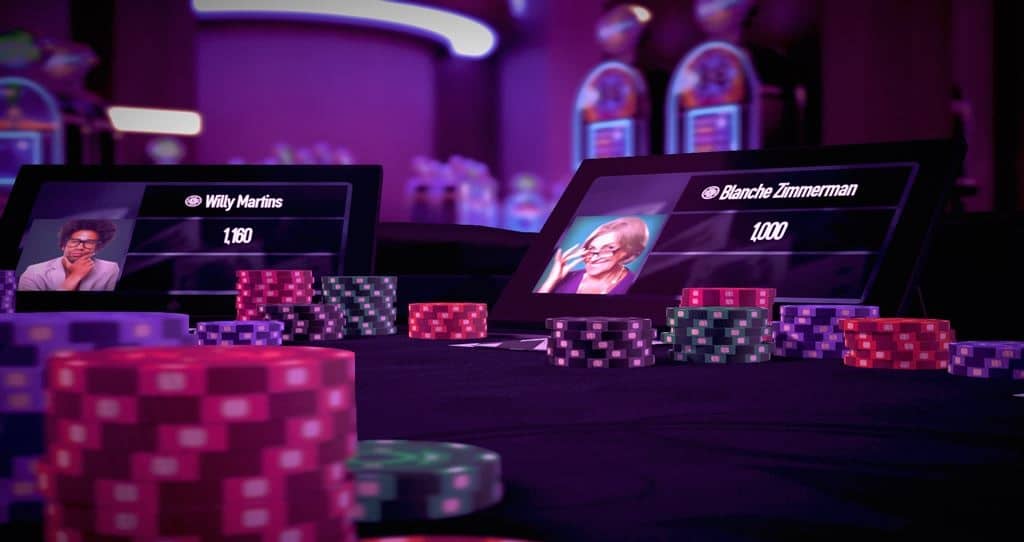 And aside from the actual poker table itself, the rest of the game is relatively bland to look at, with surprisingly little meat on the bones. Generally speaking, most of the game takes place at a poker table but for the rest, it’s just miserable grey menus and nothing else. You choose to start tournaments from soulless bleak windows, and there’s is barely any difference between tournament screens bar the inclusion of a sort of persistent leader board as you’d expect.

There are some brief customisation options though, which I was quite keen to get my hands on. Having played games like Pool Nation where a solid foundation of customisation is built into the game, I was really excited to hop in and take a look at what can be played around with. There are a stark selection of three customisation options per item (card deck, table cloth, etc.) and then the fourth item of each page is a shameful link to the in game store where you can buy more customisation for actual, real human money. Yes, this paid game, which costs £14.99, contains micro transactions. At the time of writing, there was nothing available to buy, and merely links to the steam store page for Pure Hold’em itself, but I think the suggestion speaks for itself. Culturally speaking, we’ve become slowly used to the idea of micro transactions over the years, and you’ll always get some games implementing it worse than others might do, but this is just sad. A game pricing this highly yet still beg for your money? Bad form VooFoo. And at £14.99, any extra customisation that is being put on sale should really be included in that price. 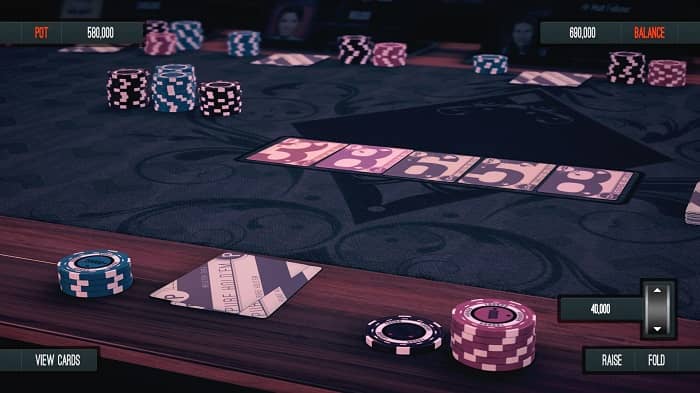 Pure Hold’em isn’t really a bad game. It plays a fairly competent game of poker and considering the barren wasteland of card games on Steam, it stands relatively comfortably among the wreckage, but make no mistake, Pure Hold’em is as barebones and bizarrely stripped down a game as any other free to play attempt you care to mention. With extra customisation options sat behind micro transactions, despite being already fairly pricey, it truly feels like it should have been a free-to-play offering rather than what we got. Nonetheless, the music and visuals paint a pleasant, relaxing experience, albeit one marred by a lack of the good ol’ human touch.

Pure Hold’em is available on PlayStation 4, Xbox One and PC. We reviewed the PC version.