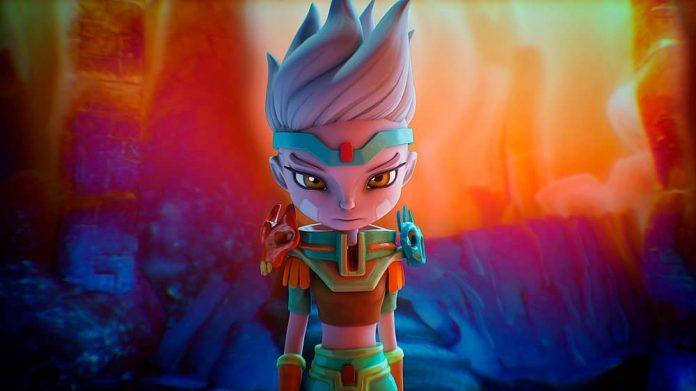 Red Goddess: Inner World is a very pretty action adventure platformer in which you travel through a world created by the protagonist’s psyche.

You play as Divine, a girl who has lost her memories. Throughout the game, you rediscover those memories and uncover the truth about why she has forgotten them. This sounds like it would be a great premise… if the gameplay and protagonist were actually interesting, that is.

When I first played Red Goddess: Inner World, it glitched majorly during act one, to the point where I couldn’t continue any further. After a couple of weeks of trying over and over again I finally got lucky and could continue. However, during this time, not once was I eager to get back to playing it or upset that it wasn’t working.

Visually the game is unique and very nice to look at. The crystals are especially pretty and the land itself reminds me a little of a game called Godus, with its bright colours and beautiful yet blocky landscapes. The soundtrack is also well-suited. Unfortunately it falls flat in almost every other aspect. Divine herself is an average hero with not a lot going for her. She doesn’t talk or show any emotion during the game, so it’s hard to empathise or relate to her. Instead, a narrator simply tells us everything she’s thinking. In fact, there are no truly likeable characters whatsoever. For most of the first act, you are followed by a blue figure, who I assumed was an irritating guy. It turned out to be an irritating woman, whose only words seemed to be, “Divine! I can’t talk right now. Run!” In a game which relies heavily on plot to entice you to play, there isn’t a great deal of character development.

The jumping system is flawed, and considering you are required to jump throughout the game, it becomes difficult to truly enjoy it. Sometimes Divine will jump through platforms as opposed to landintg on them, or will skid when she lands, causing you to frustratingly fall off the other side, often ending in death. On PC, the controls are awkward and take a while to get used to. Both WASD and arrow keys are used but for separate commands (WASD for movement and arrow keys for fighting, actions and dashing). However, the given instructions don’t always discern between the two, so you learn by trial and error. There are three main fighting styles: Divine’s own magic, Rage and Fear. In Rage mode you can defeat red enemies, and in Fear you can defeat blue enemies. Each of these are activated by keys surrounding the WASD movement keys, so performing combinations can be quite complicated and it is easy to activate styles by mistake. On a peculiar side-note, these changes in styles also seems to change Divine’s gender, as the fighting noises in Rage and Fear mode have a definitive masculinity.

In particular, the controls make fighting numerous enemies difficult, especially during the monotonous boss fights. These golems have a crystal in their front and back which must be destroyed whilst dodging their extremely predictable attacks. These are easy and very boring fights made difficult by the addition of the normal monsters. It also doesn’t help that sometimes despite blatantly hitting the enemy, it doesn’t register. It was during one of these fights that I gave up the game entirely.

The narrator’s voice grows increasingly irritating the further along you play. Especially when the game’s jumping system glitches again and you constantly have to restart from the last cutscene and hear him repeat the same phrases over and over. In many of these situations I had to watch a YouTube walkthrough to understand how to overcome certain obstacles. However, the YouTuber I watched also gave up on the game soon after the first act due to “issues with jumping” and “frustration”. Overall, Red Goddess: Inner World is a mess. The concept is good and the animation is pretty, but wholly nothing to rave about. The glitches make it impossible to play without getting angry. If the issues were resolved however, the gameplay would actually be enjoyable; for instance, the wall jumping ability felt effortless and fun. But without a good story to drive us onwards there’s still no point.  If more time had been spent on plot and character development, it may have made me actually want to play the game.

Ironically, the last words before I gave up were, “Divine! You shall never discover the truth!” Indeed I won’t. And I won’t lose much sleep over it either.

Red Goddess: Inner World is available on PlayStation 4 and PC. We reviewed the PC version.