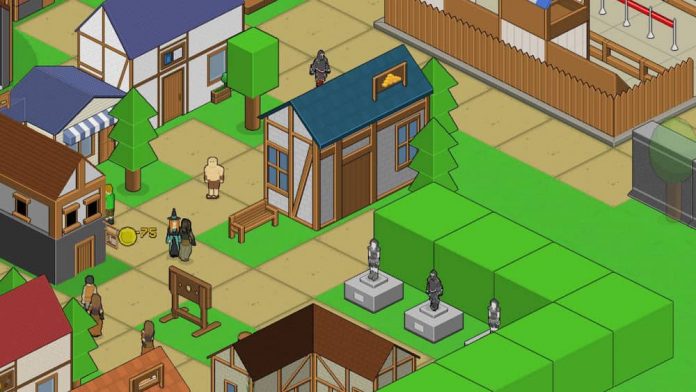 Made by Skatanic Studios, RPG Tycoon puts the player at the head of a burgeoning kingdom and allows them to hire “heroes” to venture into nearby lands to win glory and honour. Available as an Early Access title on Steam, the game is still in development but has a fully functional interface and allows players to take control of their kingdom and expand it/level up as much as they can.

In truth, it’s generous to describe the starting point of the game as a “kingdom”. The player begins with a square of land with a few trees on it and enough coin to build a homestead to house the heroes you’ll need to hire. The heroes can be despatched to nearby kingdoms to win money and “followers” for your kingdom with their antics. The player can influence their success by matching quests to the characteristics of their heroes (e.g. a hero with strong physical attributes is likely to do better on an endurance quest) and by making key decisions such as whether to tackle an obstacle or navigate around it.

“RPG Tycoon is a curious title. There is undoubted potential in its intention to blend two popular game genres – the tycoon, empire building style of Sim City and the RPG adventure game”

As heroes bring in coin and glory the player can open up new revenue streams by purchasing assets for their kingdom and building it up Sim City style. Roads, taverns, weapon shops, sandwich shops and libraries can be built to bring in visitors and their revenue, while “decorations” such as trees, wells and park benches also contribute to the profitability of a settlement by making it more attractive. As the kingdom grows in wealth and popularity it can begin to rival existing settlements for supremacy. 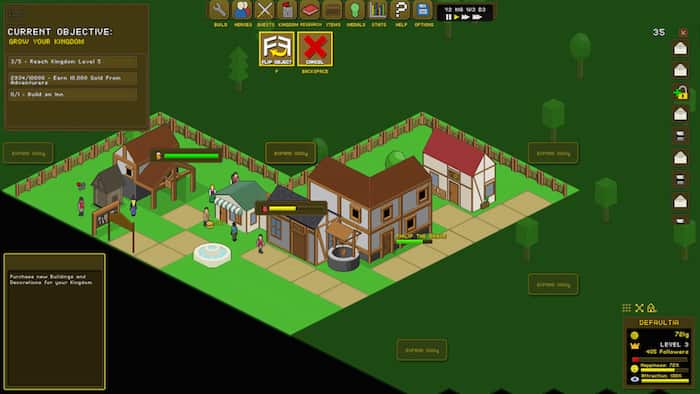 RPG Tycoon is a curious title. There is undoubted potential in its intention to blend two popular game genres – the tycoon, empire building style of Sim City and the RPG adventure game. It seems to follow logically that, in the style of the all-conquering Game of Thrones, adventure quests and dealings in foreign lands could build the strength of a homestead or “house”, with the levelling up and expansionism of both genres complementing each other.

Unfortunately, the existing version of RPG Tycoon provides such a poor playing experience that it doesn’t succeed as either an RPG or a tycoon game, let alone at the intertwining of both.

“Unfortunately, the existing version of RPG Tycoon provides such a poor playing experience that it doesn’t succeed as either an RPG or a tycoon game”

The graphics and music of the game are amateurish, even for a low budget production, and serve to distance the player from the game rather than drawing them into it. The interface is a curious blend of the intuitive and the irrelevant. It is easy to find and operate the basic commands of the game, but on the screen itself there is an excess of information about individuals visiting your kingdom, rival kingdoms, hero attributes and the ever-changing status of the game world.

It might be argued that such a wealth of information can add depth and playability to a game. However, operating on “normal” difficultly level I was able to increase my wealth and level up without paying attention to anything beyond basic quests and buildings. I had no incentive to learn the role of this extra information and, indeed, became bored extremely quickly by how easy it was to succeed. 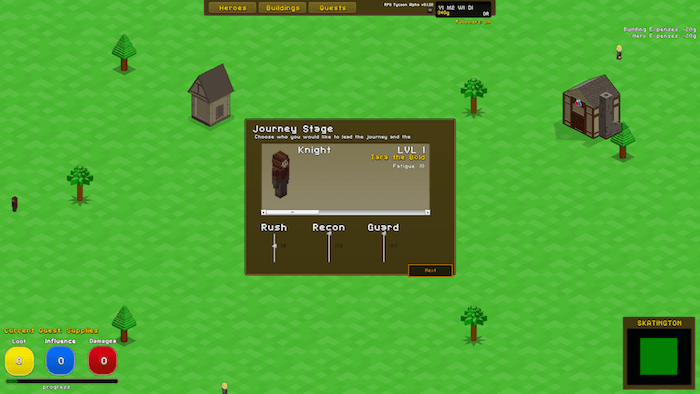 To make matters worse the quests have no coherent storyline and the player interventions appear random, with a rolling of the dice usually determining whether a decision was profitable or not. Does that encourage thought and investment in the mechanics of a game?

In its current condition I couldn’t recommend RPG Tycoon. The game is poorly and confusingly presented and, ironically given its title, provides little incentive for the player to invest in it. As the title is still in development I will withhold a final judgement but it certainly requires some work.