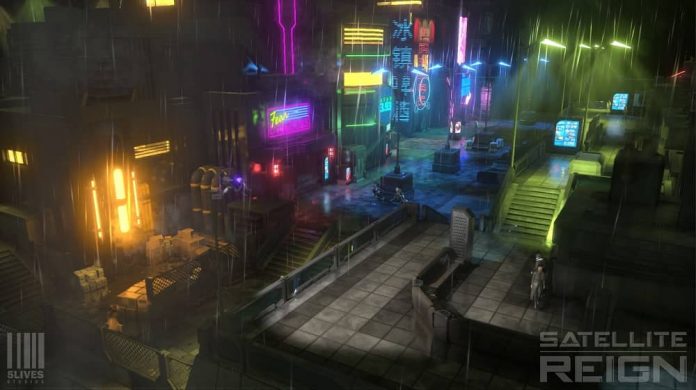 A cyberpunk world, shadowed in darkness that engulfs you in every turn, yet illuminated by neon at once relieving in its light and unsettling in its tone. A team of four move through this world, observing and calculating each move, using stealth and sabotage to achieve their goals. This is the world… of Satellite Reign.

But enough of the holiday brochure, how does the game hold up?

The biggest issue for me was random glitches and bugs. Once inside the game I never came across anything game-breaking, however I did have major struggles getting the game to load up in the first place. I started and shut down this game about three times before finally getting it to work. Looking through the comments left on Steam, this doesn’t seem to be a common occurrence, so perhaps I was just unlucky.  Apart from this little hiccup, it ran smoothly; the bugs I did come across were mostly slight glitches or lag, nothing that affected my experience as a whole. And in terms of that experience, I’ve got to admit that Satellite Reign is to be a game to look out for.

Now, as I’m essentially a noob to these kind of games – besides a few short and unsuccessful dabbles in a couple of strategy games in the past – I can’t really say that the controls are particularly welcoming to those new to the genre. The instructions in the tutorial are written in very small print; in fact most of the on-screen icons and buttons are small which may cause a problem to some. After playing it for a few hours and getting used to the controls, they were as tight as anything, although if you haven’t been able to grasp them you will struggle with this game. The studio clearly put a lot of work into getting these controls just right and they match perfectly with the camera (I am not usually a fan of this kind of top down angled camera so take that as a huge thumbs up). You can also adjust the controls to cater to your preferred playstyle, which is a great way to add variety to your game. As mentioned earlier, there is a team of four under your control, each with a specific skillset. You have the shooter (who shoots things), the infiltrator (the shadow in the night), the hacker (the guy that would be terrifying in real life, seriously look at how quick he can loot ATMs) and the support agent (the eavesdropper). You get these guys quite early on, and can control them as a group or individually, giving specific commands and utilising each of their particular skills to complete each mission. There are endless ways to tackle each mission; you are not limited by anything except your imagination. This leads to something that really made this game stand out to me and, despite me not being much of a strategy gamer, made me want to keep playing. The game feels… real, for lack of a better word. Each mission does not have to be completed in a specific order;in fact, they do not have to be completed at all. You will get distracted or diverted from your original task at least once during this game, and if things go wrong (for example, you get spotted or you find that you’ve been given wrong information) then you have to adapt to those changes. It’s an absolutely ingenious mechanic that I would love to see implemented into more games: rather than just having to restart the mission as normal if something goes wrong, you have to follow the new route presented, and improvise and think on your feet. It makes you feel more engaged with the story, and presents some great opportunities for character development.

Without a doubt, something else I can praise the game on is its environments. This game is just beautiful. Dripping with atmosphere and lit wonderfully, there were honestly moments where I just stayed in cover to look around at my surroundings; dingy dark alleys, towering buildings and a lot of neon. The level of detail adds to the world immensely and matches the tone of the gameplay, intensifying the experience and immersing you fully into the action. The sound design is also wonderful, matching the tone wonderfully and blending in to the point where, honestly, I wasn’t aware of the music. It felt like part of the sound design. It really does feel like everything was designed to be perfectly synchronous in the game. Satellite Reign is a great game. It really is. I usually don’t buy into hype surrounding new games but this is really worth  giving your attention to. If you are into strategy games or if you enjoy cyberpunk style environments, then this is the game for you. It may not be the most welcoming to those unfamiliar to the genre, but if you take your time it’s definitely worth the effort. The environments look beautiful, the controls are tight and the sheer amount of options you have for progression really makes this an interesting experience. Give it a go. You may just fall in love with it.

Oh, apparently this game is also considered a spiritual successor to Syndicate.

Satellite Reign is available on PC.