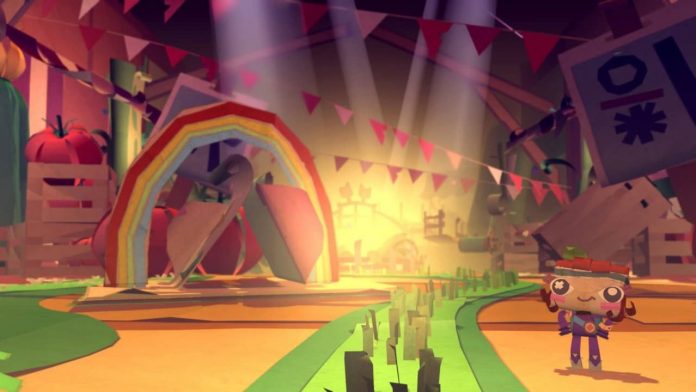 Tearaway was a big hit with the critics when it originally ripped its way onto PS Vita back in 2013, but unfortunately it didn’t fare all too well at retail.

Now released on PlayStation 4 in the form of Tearaway Unfolded, Media Molecule have given their quirky title one more chance by going back to the drawing board and creating a whole new papery experience especially designed to make use of all the bells and whistles on your DualShock 4 controller.

I hate to admit that despite being a proud Vita owner, I haven’t yet played Tearaway. That means I’m reviewing Tearaway Unfolded being completely new to the experience, without being able to compare it to the PS Vita version. From what little I’ve seen of the Vita version, this new PS4 iteration has been completely beefed up, with new levels added and the innovative features of the game completely changed from being designed with a touch-screen hand held console in mind to now being unique to a PS4 controller. In fact, Media Molecule have made sure that every single extraneous feature of the DualShock has been given a purpose – no matter how annoying it is to use.

First though, it must be noted just how visually stunning Tearaway Unfolded is. With each element of the game meticulously created as a single piece of paper, it’s often easy to forget that you’re looking at a digital video game rather than a mindblowing papercraft project. The colour palette, character and environment designs all perfectly complement each other to create a world which is simply a delight to behold. Your avatar, a cute little messenger named Atoi, is a pleasure to look at, and your given ability to customise him (or her) however or whenever you see fit, is a great way to personalise your experience. Combine this with quality voice overs and a gorgeous original soundtrack, and you’ve got what could be the staple platforming game of this generation. Gameplay wise, Tearaway Unfolded tries hard to be innovative and original – and in many ways it does succeed – but as its core, it’s a very typical 3D platform game, and as such falls victim to the same pitfalls that many 3D platformers suffer from. The most notable issue that tends to plague most 3D platforming titles is an unruly camera. Whilst the right analog stick does allow you to have minor control over the camera, it often refuses to budge, and many times I found that I couldn’t clearly see Atoi or my path ahead – and as a result, would end up falling down gaps in the environment that I just couldn’t see were there. This is especially irksome when having to jump from platform to platform (it’s in the name of the genre; there’s always going to be a lot of it) – the camera often adds an extra, unnecessary obstacle and makes it so you can’t always judge the distance you need to travel.

At the launch of every new generation of console, there’s always the onslaught of games that feel like they have to utilise every new function that the new hardware has to offer. When PlayStation 3 first arrived back in 2006, there was a wealth of games that followed, all using the sixaxis controller’s brand new motion sensor. We’d have to grit our teeth and swing our controllers wildly side to side to play otherwise excellent games just so the “amazing” new features could be demonstrated to us. Tearaway Unfolded feels a lot like it should have been PlayStation 4 launch title in this respect, as it’s perhaps the most relentless display of pointless controller functionalities we’ve seen yet. The touchpad, light bar and gyroscope, along with pretty much every button in the reach of your 10 digits, are put on trial and given their own particular purpose. Some of these functions are quite nice; at least the novelty of them to begin with is fun, especially the use of the light bar – that strange mystical beacon of ever-changing glow that you’ve never been quite sure what it’s exactly there for. And whilst I’m sure it wasn’t built purposefully to chase away those pesky scraps in Tearaway Unfolded, it’s rather fun to be able to use it in some fashion.

The gyroscope features on the other hand feel more like a chore than an enjoyable quirk. The more I played of the game, the more I tired of having to move my controller around; in later levels especially, required movements felt forced rather than intrinsic to the experience – and the sheer amount of twisty movements accompanied by button presses left me holding the controller in an unnatural way with aching hands on more than one occasion.

Suffice to say, I’m not a fan of motion control. I’d rather just be able to sit nice and comfortably and tap my thumb in the appropriate direction, thank you very much. Regardless of my personal distaste of control schemes, I can’t let it affect my opinion of the game too badly, because despite the occasional bout of fingerache, Tearaway Unfolded has plenty to offer. Each level has been lovingly crafted with a distinct theme, and each feels markedly different from the next: unlike a lot of platform games, you don’t get the feeling of “reused assets” here; everything is unique, and because of that, the game never feels repetitive and there’s always something new waiting around the corner. There’s plenty of replayability too, since every level has many hidden collectibles and “side quests” to complete, such as finding hidden “presents”, completing tasks for various NPCs and photographing objects in the world. There’s also a photo mode that you can enable at any time, allowing you to mess with various filters and even camera lenses (the photographer in me laughed out loud at the default lens being a “nifty fifty”).

Despite its downfalls, Tearaway Unfolded is a fantastic platformer that any fan of the genre should check out. Its gorgeous visuals go a long way into making the janky controls forgivable, and the delightful character designs, excellent storytelling and unforgettable soundtrack all add up to one very pleasant platform experience that PlayStation owners of any age will be able to appreciate.

Tearaway Unfolded is available on PlayStation 4. Buy it now from Amazon.