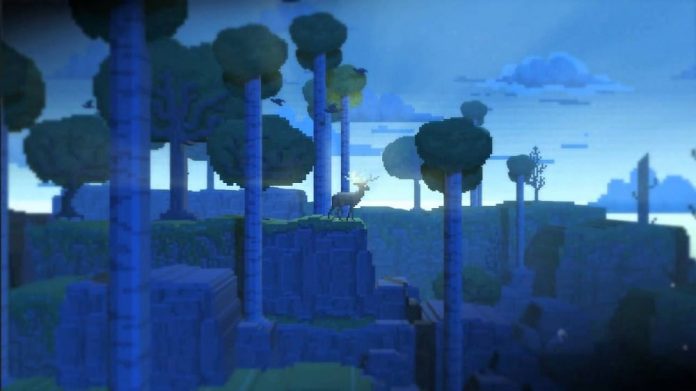 Always treat others as you would like to be treated yourself, that what was always drummed into me as a child.

It’s also the message that I believe The Deer God tries to impress upon you, in its own ham-fisted (or should that be venison-fisted?) way. But whilst morality does play quite a large role in the game, it all comes down to the same old task in the end: beat up the boss, like a boss.

The Deer God begins with a hapless hunter spotting a deer in the distance. Observing the graceful creature with the viewfinder of his rifle, a wolf attacks him, causing him to pull the trigger just as the deer’s fawn moves into the firing line. With the fawn dead, whether or not he intended to shoot to kill is not considered, as The Deer God decides to punish the hunter for his evil deed by turning him into a fawn himself. It is with this act of karma that the game begins, throwing you into a dangerous world in which you’ll have to thrive to survive, and ultimately make a grave choice as to your future.

A 3D pixel art game played on a 2D plane, the first thing you notice about The Deer God is how striking it looks. With its very unique visual style that is technically modern, yet retro in appearance, I can honestly say that I have never seen anything else like it. What really impresses though is the variety of the environments and the additional details such as the lighting, reflections, weather conditions, and parallax scrolling that really bring the world of The Deer God to life. At times it’s a wonder to behold, but unfortunately I do believe that the visuals will be very polarising due to their blocky nature. You’ll either love them for their distinctiveness or deride them for their faux-retro stylings. What I’m pretty sure everyone will agree on though, is that the soundtrack is sublime. Composed by Evan Gipson, the music absorbs you into the world, relaxing you with its soothing tones and melodies. As a platformer with endless runner and survival elements, the gameplay is surprisingly simple, yet alluringly mysterious. Thrown into the game without any real direction, all you can really do is move forward, so that’s what you do, running and jumping gracefully through the environment, avoiding chasms and spikes as you go (video games, eh?). To give the game structure and develop the fairly basic story, you’ll occasionally pick up quests along the way by interacting with humans and deer elders, and whilst they are mostly simple in nature they do at least provide a sense of accomplishment upon completion, as well as new ability or item. You’ll be helping witches with their skunk problems, troubled submariners, and also stranded deer on your travels, as well as defeating numerous bosses in the form of gargantuan beasts.

Frequently on your travels you’ll encounter other animals, and whilst some are nice and docile, most will try to attack you on sight. In these situations you have two options: stand your ground and fight, or simply jump over them and try to flee. With quite an unsatisfying combat system that sees you charging at enemies to headbutt them, you’ll be tempted more often than not to flee, but the trouble is, if you want to unlock some nifty skills for your deer you are pretty much forced to fight, as defeating both hostile and innocent creatures earns you karma. Aside from being a measure of your good and bad deeds, collecting karma makes deer statue puzzles appear that require you to manipulate blocks in numerous ways in order to unlock new abilities. Eventually you’ll be able to throw fireballs, grow vines and summon an ice storm to name but a few, and whilst these skills aren’t essential, they do help a great deal throughout the course of the game. In addition to providing you with new abilities, the deer statue puzzles also make a nice change from the platforming and combat, and will truly have you scratching your head at times. The Deer God is a very strange game, and because of that there’s something rather captivating about it. Whilst none of the gameplay systems feel particularly refined, it all comes together to create an experience that feels sinister, drawing you in until you reach its shocking conclusion. Granted, it sends mixed signals when considering its moralistic nature, giving you no other choice but to kill on many occasions, but it doesn’t really matter. If you want to play a unique platformer with survival and puzzle elements you can’t really go wrong with The Deer God, and with multiple endings as well as a tough-as-nails hardcore mode, there’s plenty here for you to sink your teeth into.

The Deer God is available on Xbox One and PC. We reviewed the Xbox One version.