Ever since childhood, it has been everyone’s dream to one day become champion of unicycle jousting. Alas, ’tis rare that such an aspiration become reality. That is… until now.

Yes! Thanks to Spanish based indie game studio, Rodaja, we can now live out our most glorious dreams! In Unfair Jousting Fair, a friend and yourself must mount your unicycles and destroy each other in a spectacular fashion. The game sports a rather unique 2D art style, lovingly hand-crafted and rather amusing while the soundtrack consists of music created especially by Madcap Sound Lab.

Upon entering the front menu for the game, you are greeted by surprisingly few options. While it doesn’t seem to demand much from one’s PC, it would be nice to have more than volume sliders, three language options alongside resolution and “screen shakiness” sliders; rebindable controls and more in-depth graphics options wouldn’t have gone amiss. 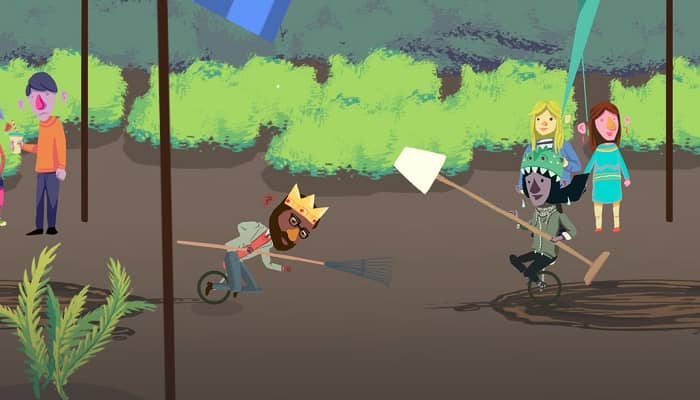 Once you begin the game, you must choose your characters, all of which are some sort of variety of hipster wielding purposely unbalanced weapons ranging from from garden rakes to canoe paddles. Of course, the idea of a group of Starbucks veterans going at it armed with common household tools is hilarious to begin with, but then the constant lack of weapon balance ends up condemning any competitive element while the similarity of characters becomes rather dull. Party games like this thrive so much more with character variety! Yeah, your characters may look different but think of how much more fun you’d have if a bear was thrown into the character pool!

Another thing that struck me as peculiar was that there didn’t seem to be any single-player functionality nor online mulitplayer mode. There is no way to play this without a companion of some sort, not even a practice mode to get to grips with the controls! Speaking of controls, I can’t say I agree with Unfair Jousting Fair‘s control scheme. Understandably, the point of the game is to stay balanced atop your unicycle but the way the game goes about this mechanic is rather cruel and subtracts from the playability and fun a lot further, it takes far too long to get used to the layout, even using the gamepad is a pain! 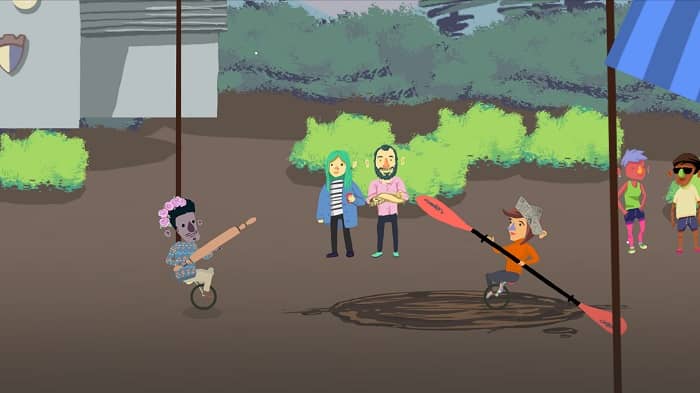 I can see where Rodaja was going with Unfair Jousting Fair. Fun, quirky, competitive games like this, namely Starwhals and Gang Beasts, are increasingly popular especially amongst YouTubers and their followers. However, Unfair Jousting Fair may not hit the spot in that regard, players will lose interest very quickly due to unfairness and, while that may be the point, pricing it at £3.99 could be a bit much when there are games on the Steam market for a similar price that have much more to them.

So, does Unfair Jousting Fair amount to the same standard as other kill-the-time, casual competitive games? With the lack of balance, the unreasonably difficulty control scheme and no sign of single player functionality, Rodaja may not have a gaming masterpiece in their hands just yet.