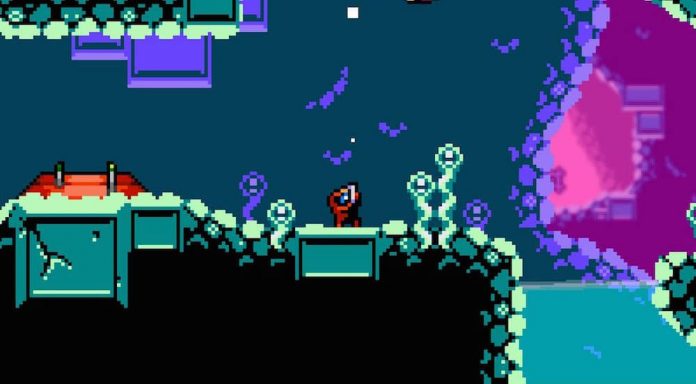 Don’t you just hate it when you’re just trying to enjoy a nice drive around your local solar system and an overly aggressive meteorite turns up to ruin your day? Well, this is exactly how Renegade Kid’s Xeodrifter begins.

You play as a charming little astronaut whose ship has been damaged by space debris, your mission being to repair the ship in question. This metoroidvania-like action-adventure 2D platformer extravaganza was originally released on PC, Nintendo 3DS and WiiU in December 2014 and has recently been released on PlayStation 4 and Vita.

The game pays homage to Metroid in that you explore several areas available from the start, shooting aliens and collecting new suit abilities in order to delve further into each area. The visuals and audio are very much reminiscent of past generations of gaming though: while charming at first, they quickly become rather repetitive and dull.

For those unfamiliar with common metroidvania mechanics, Xeodrifter could be rather confusing for a considerable amount of gametime due to the fact that you can only get so far into certain areas before confronting an obstacle that needs a suit upgrade from another area to overcome. There’s also the vague in-game menu, which displays very little information from the start, although it’s slowly made obvious that certain parts of the display are maps and others are used to showcase your upgrades. Do not be fooled by Xeodrifter‘s tiny, adorable exterior; this game is almost unbearably infuriating. The lack of checkpoints is simply cruel, especially considering how swiftly you can die. In order to surpass one area, I had to memorise each and every enemy’s attack patterns and how many hits it would take to end them. You can collect health upgrades from hidden areas, although they can be swiftly lost when the next enemy you run into decides it wants to be particularly difficult.

The enemy variety tends to be rather interesting and original, although after a while you may realise that you’re killing a heck of a lot of the same creatures, or at least a variation of the same enemy. While on the subject of enemy variety, it should be mentioned that, while there are technically four bosses, there’s only one boss; every boss is just the first boss – a rabbit-squid hybrid alien – with a different coloured skin and a new power so it can diversely ruin your day. The bosses aren’t all doom and gloom though; each comes with a checkpoint – a checkpoint – as well as a handy upgrade for your suit, allowing you to suffer through even more of this Godforsaken game! At some point during gameplay, things begin to look up. You’ve got a couple of interesting upgrades that change the way the games played, how it feels, and you’re in the zone. Your gun isn’t just a pathetic piece of junk anymore, it’s the machine gun that’ll aid you as you wipe out the inferior alien life forms. Suddenly, you’re no longer a weak, harmless-… Oh, you’ve died again? Of course you have, this game wants you to feel pain.

Xeodrifter is very much a game to kill the time. Depending on how good you are at action-adventure platformers, it’s a rather short game, but worth the money. If the game wasn’t so stingy when it comes to health pick-ups and checkpoints, I could easily recommend it to a much wider audience. This game could be so much more than it is; understandably it’s based on retro games but it could have easily been expanded whilst still holding onto that metroidvania backbone. If you fancy a quick nostalgia trip for the low, low price of £6.99, I would suggest you do buy Xeodrifter. If you want to punish yourself in a cruel and unusual fashion, I’d recommend Xeodrifter. If you’re easily stressed and want to remain happy while playing video games, don’t bother.